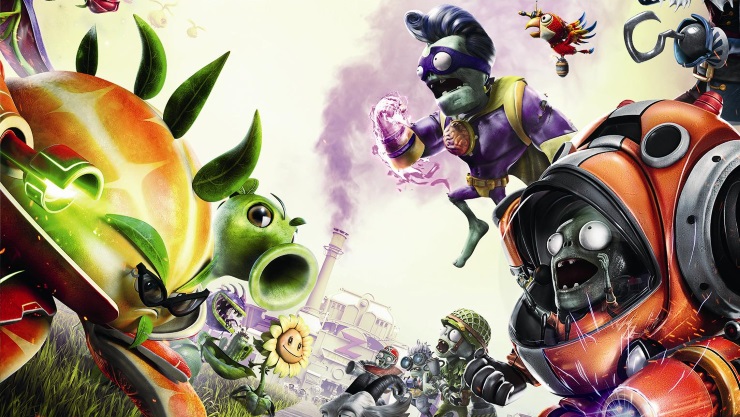 Although Plants vs Zombies Garden Warfare 2 may be somewhat trying to shed the opinion that this is a game solely for children, its Backyard Battleground hub area seems like it is the perfect fit for the younger players. While the core multiplayer modes will obviously be the main draw for many, they will still feature the online shooter issues of people always being better than you, meaning young players may become disheartened, and quit. The backyard battleground removes the main PvP aspects (until you invite other players in that is) in favour of more PvE sections, and a lot to explore.

The easiest way to describe the Backyard Battleground is to compare it to the Tower in Destiny – if there was a ton of enemies that you could fight. Split in two halves, the map acts as home base for both factions (the plants and the zombies) with a hotly contested no man’s land between the two sides. When in your base you are basically in the main menu, being able to go to terminals to search for an online match, customize your character; check out a ton of detailed stats about your play style with each character, and tons of other options. As you head out of your base the other main feature is the middle section of the map, where you can try to raise your side’s flag. Doing this will set off a horde style game mode, where waves of enemies, (plants if you play as a zombie, etc) will come and try to attack you. You can set a few defensive plants or zombies to help you defend, but most of the time it is down to you to shoot the hell out of whatever comes your way, using each character’s abilities to make things go a little quicker.

It is this section of the Backyard Battleground that makes it great for the younger kids as they don’t have to worry about being destroyed by someone clearly better than them in the multiplayer mode, but they can still have the fun of a shooter, and a fairly challenging one at that. Of course that doesn’t mean that this won’t be fun for older players, and we were given around 45 minutes to explore the many things to do in the Backyard, almost all my time was spent trying to defend the hill – it’s addictive. Of course there are other things to do, walking into the opposing sides base will usually see them unleash hell on you, providing a challenge that you probably won’t survive for very long. Elsewhere there is a football pitch to run around on, which apparently has a working scoreboard. Hidden in the depths below the ground is a shooting gallery where you are timed on your run through it. According to the developers there are tons of hidden things like this scattered around the backyard for players to find.

One of the reasons that I think this kept me entertained for so long was because you can switch characters on the fly. Not only does this stop things from getting repetitive, but it allows you to try out each of the characters before taking them into a public game, which could end up making you look like a fool if you have no idea what your abilities do.

On the zombie side of things the incredibly fun Super Brainz was my favourite. He is a melee only tank class that has a wicked combo once you learn how to use it. Jumping in using a flying kick can catch enemies off guard and then instantly transitioning into a move that sees Super Brainz spin around flailing fists everywhere can deal serious damage, then in case they haven’t died, a quick punch or use of his only ranged ability can pick off any stragglers. It takes a while to get it down but when you do it can be devastating.

Elsewhere Imp and Captain Deadbeard are the two other new Zombie classes. Imp is quick and focuses on outmaneuvering opponents, until he managed to drop in his mech suit. When in the mech he becomes a lot stronger, but it does have a long down-time. Captain Deadbeard has an incredible weapon that is effective at both close and long range, depending on if you scope in or not, he can also summon a parrot to scout out ahead. As for the Plants, Kernal Corn is perhaps the coolest – but only just. He is a basic assault class in design, but this means that he is capable of dealing out a lot of damage quickly, while being able to tank a fair bit as well. His second ability allows him to flip in the air while showing bullets onto the ground below him, which if used at the right time, can make a kill look incredibly cool.

Closely following him on the coolness scale is Citron, who is the most badass orange you have ever seen. His basic attack is a constant laser type thing, which takes some skill to use accurately, and he has abilities that can both block damage and deal a lot of it. Finally we have Rose, who, from what I can tell, seems like the character that (when played well) can be devastating and great fun, but when played poorly will be infuriating. Her abilities generally make her more of a support character, which can be quite boring at times – but master her move-set and few will be able to beat you in a one-on-one fight.

There is a lot of depth to the characters on offer, with over 4,000 customisation options spread across them. But at the basic level, characters are accessible and few should confuse the younger players. If they do get stuck, the Backyard Battleground offers the perfect place for them to play around, and generally have fun in. Considering that this is only a small taste of what Garden Warfare 2 has to offer and it starts to look like this could be a great game, but only time will tell on that front.

eSports! I joined God is a Geek all the way back in September 2013 and since then have spent most of my time on Dota 2, and occasionally posting the odd review, news article or totally wrong predictions for The International. When I am not playing Dota I can probably be seen watching some kind of strange eSport or begging for more Twitter followers (@MikeStubbsy if you are interested). Aside from GiaG I am a computing student, football coach and major Apple fanboy.
MORE LIKE THIS
EAPlants Vs Zombies: Garden Warfare 2