Dying Light: The Following – 7 Tips to Survive the Countryside 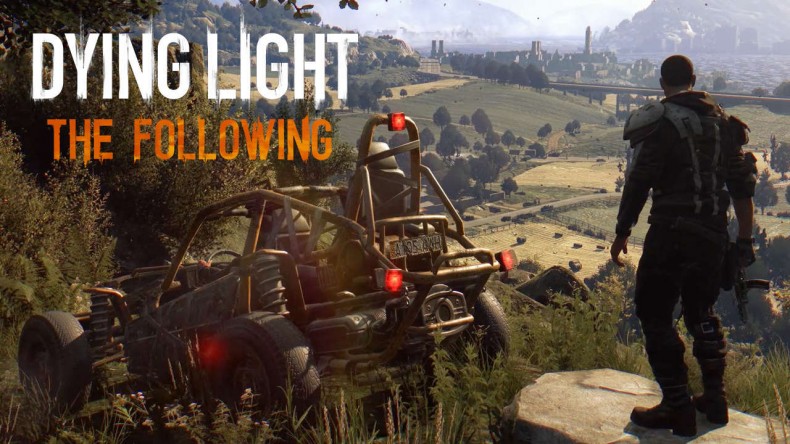 Dying Light: The Following is brilliant. It introduces a massive new area, new enemies, Volatile Nests and, best of all, the buggy, your own all-terrain zombie-masher. But it’s no walk in the park, and all the new features bring with them new dangers. Luckily, I’m here to help you out. Here are 7 tips to survive the countryside in Dying Light: The Following.

Read our original 10 tips for the base game.

The Following comes with two new skill trees: Driving and Legendary. While the latter is a series of incremental stat boosts that won’t unlock until you’ve maxed out the first three trees, Driving is the one that determines which buggy upgrades you can build as well as your vehicular talents. You’ll earn a tiny amount of Driving XP for simply flooring it, slamming through fences and bouncing over bumpy roads, but the quickest way to boost it is to mow through the undead at speed. Pulling donuts is tricky and satisfying, but the easiest way is to plough across a packed field and hit every biter you can see. Watch out though, as Vitals will jump on for a ride and every bump damages your buddy’s integrity.

Everything carries over from the main campaign (and you can jump your save file back and forth as much as you like without losing anything), so you’ve still got all your skills from vanilla Dying Light, and they’re just as useful in the country. Certain talents like the Stun Vault, Ground Slam and the two-handed Whirlwind are brutally effective in amongst groups, so don’t be afraid to go nuts – especially if you’re level 18 or higher.

Hunting Towers are multi-purpose locations, symbolised by a little white tower on the map. Not only are they respawn points if you get eaten to death, they’re also a handy place to sit and cower if you get trapped out at night away from your buggy or a safehouse. Each one has a chest, too, with free goodies to loot.

You’re buggy won’t last long if you don’t look after it, but it’s just as important to be careful with it when travelling from A to B. As I said, the easiest way to level up your Driving skill is to run things over, but that will damage your ride pretty fast. Balance it out by driving carefully between locations when you’re not smushing the re-animated into mulch. Handbrake turns and maintaining high speeds are a good way to earn XP with minimum wear and tear.

Focus on upgrading your buggy as quickly as you can. The Following’s story mode is much shorter than the main campaign, but the new area is huge and full of things to do. You’ll enjoy it all more with a decent rig, so get pimping. You unlock the ability to build better parts by levelling up, but Bilal the quartermaster quite often has upgrade parts for free. The driving challenges are a good way to earn extra XP, but they can cost valuable resources because they’re rarely easy on your buggy. The better equipped you are, the less damage you’ll suffer and the less resources you’ll need to waste.

Early on you’ll gain the blueprint for the Compound Crossbow, and it’ll become your favourite weapon in no time. A headshot is an instant kill even on Volatiles, it’s fairly quick to load, bolts are plentiful and, best of all, it’s silent. It only takes a few well-placed bolts to drop a brute, and even a Destroyer can’t weather many headshots, so crossing back over into the main campaign with it makes Old Town much more survivable. As with the bow, you can retrieve the standard ammo from the dead to use again and again.

Volatile nests are everywhere in the Countryside, and there are lots of side missions that require you to destroy them. Now, a sane person would go in the daytime when they naturally feel safer, but that’s a mistake. In daylight hours they are full of Volatiles and incredibly difficult to survive; at night, however, they’re almost empty since the Volatiles are out hunting you. Reach one safely at night and they’re much, much easier. The only problem is the time: night only lasts for around 7 minutes in Dying Light, and if you’re not quick you’ll find yourself surrounded by returning Volatiles, and very, very dead.

Senior Content Editor Mick has been playing games for over 30 years and writing about them for around 12. After drifting from site to site for a while, settling briefly at the now-defunct Made2Game and freelancing for the gone-but-not-forgotten NintendoGamer Magazine, he came at last to rest at Godisageek. Mick has been a reviewer, staff writer and content editor here for some time, while also moonlighting a little for Red Bull Games. He has 4 kids, has written 2 novels, and sometimes even manages to pay a bill or two. You'll usually find him defending the galaxy in Destiny 2, battling evil in Diablo 3, or lurking in the background on Twitter. Find him there @Jedi_Beats_Tank, or on XBL (JediWaster247), PSN (Jedi_Waster) or Nintendo (JediWaster).
MORE LIKE THIS
Dying Lightdying light: the followingTechland