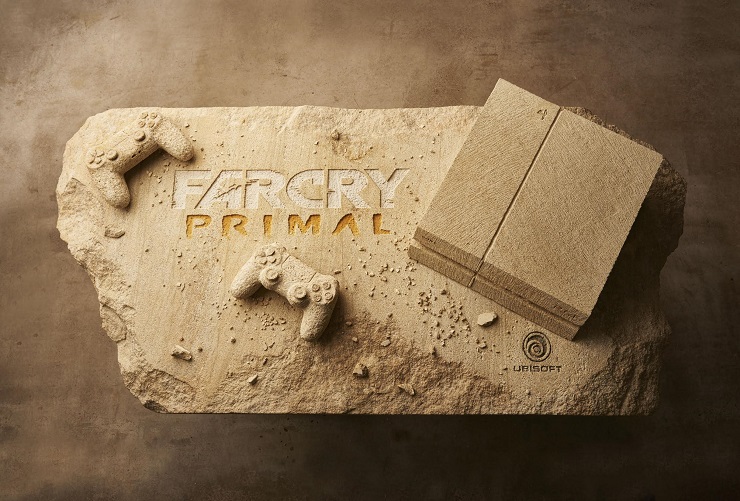 Want to see a PS4 and Dualshock 4 made out of stone? Ubisoft has you covered.

The Far Cry Primal developer has commissioned master stone mason Nick Roberson to craft a gaming set up out of sandstone, so as well as the console and two controllers we see a TV, pizza box, drinks can and a rather large coffee table (no sign of a bottle of Mountain Dew or pack of Doritos though).

It’s very impressive stuff, but don’t get too excited, they’re not actually functional. Nick Roberson like the challenge presented to him by Ubisoft:

“This project was a great challenge for me and I really enjoyed seeing the modern and techy items come together in this natural form. The buttons of the controllers were certainly tricky but I’m delighted with the final results and the fantastic way they’ve been collated for the shoot.”

While Tom Goldberger of Ubisoft was very pleased with the results Nick had achieved:

“This project was undertaken to highlight the vast landscape and rich setting of the Stone Age era in Far Cry Primal. Nick has managed to immortalize, in stone, the beautiful, elegant designs of these iconic items with unbelievable accuracy.”

Check out the pictures below, as well as the footage from the creation of the stone age gaming items.

Far Cry Primal releases next week on February 23 for both PS4 and Xbox One, while it sees its PC release on March 1.

A lover, not a fighter and an all round good guy (he would say that, he wrote this after all), he's happy to be here as part of GIAG.
MORE LIKE THIS
Far Cryfar cry primalPCPS4