FIFA 17’s Aaron McHardy on corners and a few other things, but mostly corners 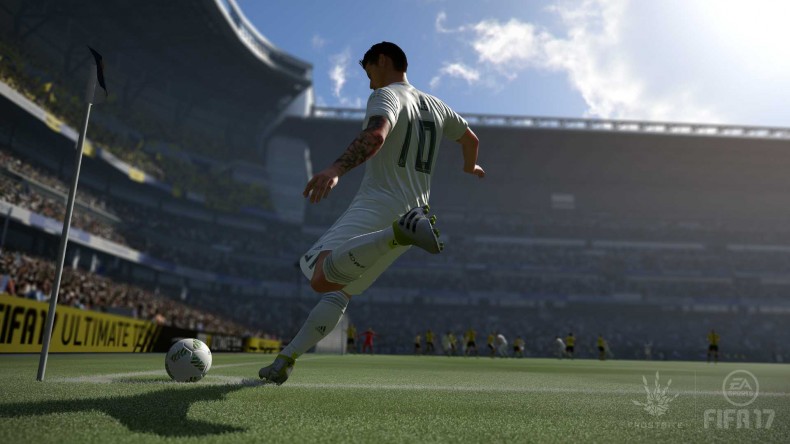 Quite often at preview events you get a bit of time with the game and then are ushered off into a small room to interview someone who is working on the game. Usually this person will tow the company line, sounding like a press release and giving the same answers all day long. This usually means that we, and the rest of the European games press end, up with close to identical interviews.

However at the FIFA 17 preview event I spoke to Aaron McHardy and he is a man that can talk a lot about FIFA. We started out talking about The Journey, and it was all very standard, but then I asked about the new set pieces and what followed was a close to 10 minute conversation about the intricate details of the new corner system. Usually I would cut this down, but what he said is all genuinely interesting, so here is the transcription of our massive corner conversation.

Let’s talk about the set pieces because they have seen some massive changed. First off, on the corners why does the aiming reticule always revert back to the penalty spot when you let go of the analogue stick?

So first of all we are still iterating on that design, on the reticle design and functionality. The thinking behind that was that at some point we were considering, and we may still do it, where you could actually make it disappear. If I am set next to you on the couch and we are playing I don’t necessarily want you to see where I am putting that, so we have to come up with some way to mask that so that we aren’t giving away where the corner is going. So one of the ideas was that it could disappear, and you need a piece of ground where everybody knows where it is if they can’t see it, so that’s why it snaps back to the penalty spot. We are still floating the idea around, but that’s why it’s like that now. Why have you decided to change the corners now, honestly I didn’t think the old system was that bad.

So rewriting the corners has also been a long project, it’s taken a couple of years to do that, the corners and penalties have taken two years. I think the main driver was that we looked at corners in previous iterations and, you are right, they weren’t that bad, but we looked at them and said it doesn’t feel like a real corner. You don’t get the sensation that you get when you take a corner in the real world, you don’t even get the sensation that you get when you watch a corner being taken on the TV. It just doesn’t feel right.

A lot of the cool stuff we didn’t get a chance to talk about today happens behind the scenes in the corners. A lot of the things that we did to make the corners look, feel and eventually play a lot more like real life and be a lot more engaging, were to do with the intelligence of how people decided to run, where they decide to run to and how that relates to the ball that’s being played into the box.

So behind the scenes what you are not seeing is that when you are aiming your reticule players are actually jostling for position, to try and make a run to get open and be effective in the box. And then when you actually deliver the ball they are attacking the perceived trajectory of where they think it will go. Both those thing are actually quite important because the first part, the runs, gives us a lot of variety in how players interact, which is something you always see on corners. There is shirt tugs and people pushing around each other, but we have never been able to create that, other than artificially, in the game. Now we are actually doing that stuff and it has a real purpose, because they are actually trying to get open to make a run, just like in the real world, it comes to life and makes it feel a lot more like the realistic thing. Then when they are making the runs they are attacking the trajectory of the ball. This opens the door for us to get a whole lot more emergent behaviours from our set pieces. In previous iterations you would power up your corner, aim it in the box and then just jam the button and try and get the header. Now we are looking at the new system where you need to switch to someone and get open to get on the end of it. This also brings to life flick ons, because the guys that you aren’t controlling are trying to get on the end of it too. So something like the Sergio Ramos goal that we saw in the Champions League final the other week, where the ball is played into the box, somebody nods it on, but other people are still attacking where they thought that trajectory was, which means the play is still alive on the flick on. That kind of behaviour we couldn’t get on the corners that we had before.

All of that is kind of the driver for why we wanted to do it, but it is wrapped up in the simple concept that we wanted corners to feel rewarding when you go up for a corner. In FIFA now, when you get a corner you do it and you get on with the game, but we want you to be like ‘okay great we have a corner, let’s take advantage and execute on it.’ I feel like with the new system we really get that feeling where if I do this right I can earn myself a goal, unlike now where it’s just a coin flip, it wasn’t an actual coin flip by the way, but that’s what if felt like.

In the old FIFA if you scored you thought ‘cool I have got a goal’, but you didn’t feel like you earned it. Now when you put it in the goal you feel like you earned it, as you did everything from putting the ball onto the right spot, to getting the player into space and choosing the right way to finish it, with our new attacking techniques you can use the new downwards header if the situation calls for it, so you feel like you have earned all of that and it is a lot more rewarding and the pay off is a lot bigger.

So that is why we embarked on that journey, and while we did that we were also doing the penalties and we ended up doing free kicks and throw ins as well, as we felt like all of these could use a refresh because we haven’t touched them for a while.

You use the same corner system on some free kicks but not others. What are the parameters for if the game decides to use this system or the shooting free kick system?

We use the corner system in wide areas, outside the box, because they are much like a corner, and we also use them in what we call the deep free kicks, which is basically the free kicks in the attacking half that you would never have a shot at goal from. If you have a chance to shoot from distance you get the direct free kick approach. When in your own half we have much more of a quick free kick system for all the extremely deep set pieces, it’s not in the build you played today, but we have that working back at the office.

Out of all the new set piece mechanics, which will fans most like and which do you think will have the most mixed reaction?

So 100% I think the biggest impact is the corners, I think what it does, for all the reasons we just spoke about, makes them better. I know when I get them I’m actually excited to try them now.

I won’t say it’s the one I’m waiting to hear the impact of, but what I will say is it will be a whole job to relearn is the penalties. We are still doing things to ease people into them a bit more, but the penalties are certainly different to how you take them in FIFA now. I think once people understand and figure out how to control them they will appreciate what we have done, because they result in more tension and more drama.

We made it a lot simpler, in some regards, to how you actually strike the ball than our previous penalty system, in that you just aim where you want to kick and power it up much like you do from free play. So in that regard it is much simpler, but coming to terms with them, understanding all the things you can do even though you don’t have to do them is a big shift from what we had before. So that one I am hoping that people are patient when they first get it and spend the time to learn how to take a penalty, because I think they will appreciate it once they understand what we have done.

eSports! I joined God is a Geek all the way back in September 2013 and since then have spent most of my time on Dota 2, and occasionally posting the odd review, news article or totally wrong predictions for The International. When I am not playing Dota I can probably be seen watching some kind of strange eSport or begging for more Twitter followers (@MikeStubbsy if you are interested). Aside from GiaG I am a computing student, football coach and major Apple fanboy.
MORE LIKE THIS
ea sportsFIFAfifa 17