Overwatch Competitive Season 2 is now live on all platforms 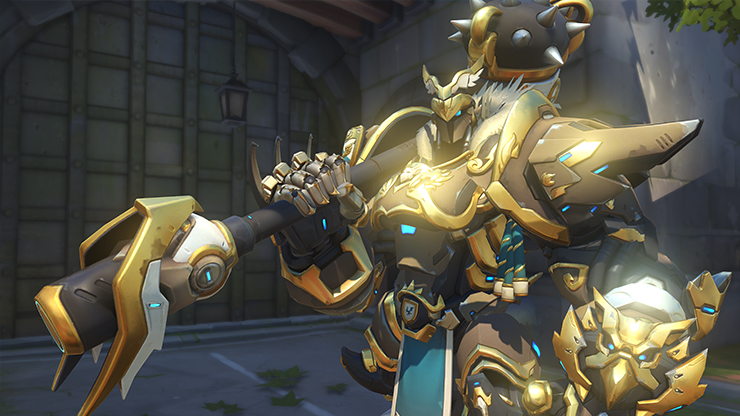 Blizzard released a patch for Overwatch on PC and Xbox One earlier and PlayStation 4 last night that adds a new map, competitive season 2, and more.

Competitive Play Season 2
We’ve made some big changes to Competitive Play in Season 2. The most noticeable change is the introduction of skill tiers, which we hope will better communicate players’ relative skill levels. Competitive Play will put a greater emphasis on skill tiers over specific ratings, and as such, a player’s tier will be more prominently displayed throughout the game. We’ve also switched the skill rating system to a 1-5000 scale to give players more detailed information about how each match affects their specific rating.

Sudden Death is also going away in Season 2. Instead, matches that are tied when the clock runs out end in a draw—though, it should be a rare occurrence. Because of this, we’ve made some changes to our game modes in Competitive Play to help reduce the chance that a draw can happen.

We’ve also made a few minor adjustments to leaver penalties, the top 500 system, and the competitive point system. Read on below to learn more!

New Assault/Escort Map: Eichenwalde
The forest has slowly begun overtaking the abandoned village of Eichenwalde, but the scars will never completely fade. During the Omnic Crisis, Eichenwalde was the site of a key battle. General Balderich von Adler took a handful of crusaders to the village in an effort to outflank the omnic army. Balderich’s soldiers were able to break down the enemy forces, giving the German military an opportunity to push back, but the Crusaders didn’t make it out of the battle. General Balderich finally collapsed in the castle’s great hall.

General
When activating the “Ultimate Status” communication, Symmetra now reports the number of charges left on her teleporter
When activating the “Needs healing” communication while targeting a teammate, Ana, Lúcio, Mercy, and Zenyatta will now tell allies to group up to receive healing. A marker will also appear above the player’s head, allowing teammates to locate the healer more quickly
Added Torbjörn as an AI-controlled hero in Practice vs. AI, Play vs. AI, and Custom Game modes
Sit and laugh emotes are now unlockable for all heroes
New Legendary skins have been added for Reinhardt

Competitive Play
Skill rating is now measured on a 1-5000 scale instead of the former 1-100 scale
Skill Rating Tiers
Players will now be assigned to a tier, depending on their skill rating
Bronze – 1-1499
Silver – 1500-1999
Gold – 2000-2499
Platinum – 2500-2999
Diamond – 3000-3499
Master – 3500-3999
Grandmaster – 4000-5000
In Bronze, Silver, Gold, Platinum, and Diamond tiers, a player will not drop out of their tier even if their skill rating falls below the cutoff
In Master and Grandmaster tiers, a player whose skill rating falls below the tier’s minimum will be moved to a lower tier
Players that have reached the Master and Grandmaster tiers must be within 500 Skill Rating of their groupmates
Players that are Diamond-tier and below must be within 1000 Skill Rating of their groupmates
Skill Rating Decay
Players in Diamond, Master, and Grandmaster tiers that haven’t participated in a competitive match for 7 days will lose skill rating
Players with a skill rating above 3000 (Diamond tier or higher) will lose 50 rating points every 24 hours, but their rating will not fall below 3000
Competing in a single match will halt skill rating decay
Players that haven’t participated in a competitive match for 7 days will immediately drop out of the top 500
Map Changes
Several refinements have been made to the time bank system for Hanamura, Temple of Anubis, and Volskaya Industries
The time bank system has been added to Dorado, Hollywood, King’s Row, Numbani, Route 66, and Watchpoint: Gibraltar
Time granted for taking objectives on Dorado, Hanamura, Hollywood, King’s Row, Numbani, Route 66, Temple of Anubis, Volskaya Industries, and Watchpoint: Gibraltar has been reduced from 5 minutes to 4
Competitive Points
Existing competitive points saved from Season 1 will be multiplied by 10
After winning a competitive match, players will now receive 10 competitive points (instead of 1)
Players will now receive 3 competitive points for a draw
The cost of golden weapons has also been multiplied by 10 – from 300 to 3000
A soft cap is being placed on the number of competitive points that can be saved
Players with more than 6000 points at the start of season 2 will no longer accrue points by playing competitive matches
End-of-season rewards will still be granted to players at the soft cap
Instead of going into Sudden Death, tied competitive matches will now result in a draw
Players must now win at least 50 competitive matches to be eligible for a spot in the top 500
Players must now complete more matches to clear their penalty status for leaving a competitive match early

Developer Comments: Altering the size of projectiles in flight had too many unintended side effects to keep in the game, at least in its current form. We will continue watching this and make additional changes if necessary. We’re also making quick melee more consistent when interacting with enemy abilities.

Developer Comments: Defense Matrix was too efficient when tapped repeatedly, instead of being held. Now, the recovery delay matches the ability cooldown.

Developer Comments: Hanzo has the potential to deal a lot of damage, but he can feel really inconsistent, even at a medium distance. By increasing the projectile speed, we’re extending his reliable range, making it easier to land shots without having to perfectly predict enemy movement. To compensate for the increased projectile speed, we’ve decreased the size of his arrows, meaning his shots now require a bit more accuracy.

Developer Comments: Genji was a little too difficult to pin down, and these changes will balance his speed. Swift Strike no longer cancels the recovery time from a quick melee attack, so players will no longer be able to get a free melee attack before using Swift Strike. Lastly, Dragonblade’s duration was long enough that it often felt too difficult to reasonably counter.

Developer Comments: Thanks to Lúcio’s speed increase, he was almost a must pick in every lineup.

McCree
Deadeye
Now drains over a .25-second period (instead of displaying a 50% reduction on the ultimate meter when activated and 0% when confirmed)

Developer Comments: If players managed to counter or avoid McCree’s ultimate, it would often regenerate very quickly since only half of the ultimate charge was spent. Now, this ultimate works like every other ultimate that has a duration.

Developer Comments: Mei has an interesting toolkit, but her ultimate often felt like it was too difficult to use effectively. Consequently, it felt weak compared to many other ultimate abilities. The freeze effect has been piercing barriers for some time now, but the projectile would still be blocked. Now, you can throw it down exactly where you want it, so it’s much easier to utilize the full radius effectively.

Mercy
Caduceus Staff
Healing Beam
Healing-per-second has been increased by 20%
Resurrect
Resurrected allies will be able to maneuver after 2.25 seconds (reduced from 3 seconds)

Developer Comments: Resurrection now allows teammates to jump back into the fight more quickly, which should help Mercy survive after activating her ultimate. Mercy’s healing is also getting a boost to solidify her role as a strong, single-target healer.

Roadhog
Chain Hook
If the hooked target isn’t in Roadhog’s line of sight when retracting the hook, they will be moved back to the position where they were originally hooked

Developer Comments: This change means that hooked targets will be less likely to slide along walls, potentially ending up in an odd place after they’ve been reeled in.

Developer Comments: Zenyatta is in a far better place since the last update, but the strength of Orb of Discord has turned him into an almost mandatory pick. These changes reduce Orb of Discord’s effectiveness, but his damage-dealing potential has been increased. The amount of damage that he delivers should feel largely unaffected by the change.

Developer Comments: The balance changes that were implemented in previous patches have eliminated the need for Watchpoint: Gibraltar to have an extra checkpoint.

General
A new “Allied Health Bars” option has been added (Options > Controls)
Contextual menus have been added on the hero selection screen, giving players the ability to report or group up with other players
Matchmaking UI is now purple in the Competitive Play queue
Made several minor adjustments to typography in the Spectator UI

AI
Fixed a bug that could cause AI Bastion to become stuck, continuously healing himself in the spawn area
Fixed a bug preventing Torbjörn from placing his turret in viable locations

Heroes
Appropriate sound effects now play when Ana shoots barriers, shields, and armor
Ana’s scope now correctly displays all custom reticle options
Ana’s attacks and abilities now activate the controller’s rumble function
[XB1 Only] Fixed a bug preventing bullet shells from being rendered in Bastion’s “Bullet Rain” highlight intro
D.Va no longer communicates her ultimate status for Self-Destruct while charging her Call Mech ultimate
D.Va’s Boosters are no longer auto-cancelled if activated while her primary fire is active
D.Va’s ultimate charge status is no longer reset to 0% if she falls to her death while piloting a mech
Hanzo’s “Spirit Dragon” unlockable voice line now correctly plays when using his Okami and Lone Wolf skins
Fixed various issues with Junkrat’s emote and highlight animations
Fixed a bug that kept Junkrat’s ammo from being refilled when he was resurrected
The alternate fire on McCree’s Peacekeeper ability now activates the controller’s rumble function for all six shots
Fixed an issue causing Mei’s Ice Wall to push herself to the side when cast at her feet
Fixed a bug preventing Mei’s Ice Wall from being destroyed by a moving payload
Fixed a bug that prevented Mei’s Ice Wall from appearing at the target location when cast
Fixed a bug allowing Reaper to reach unintended map locations using Shadow Step
Fixed a bug causing Reinhardt’s shield to jitter when turning in third person
Fixed an issue that prevented Roadhog’s chain from displaying correctly in some situations
Fixed a bug causing Roadhog’s chain to become permanently extended if his target disconnected from the match
Fixed several issues with Symmetra’s emotes and highlight intros
The scarf on Tracer’s Slipstream skin is no longer stiff in the Hurdle highlight intro
The names of Tracer’s Sprinter and Track and Field skins now display correctly
Fixed a bug preventing overtime from being triggered while Zenyatta is using Transcendence

Overwatch is available on PlayStation 4, Xbox One, and Windows PC. There’s a free weekend coming soon as well. Patch notes are also on the Battle.net forum.