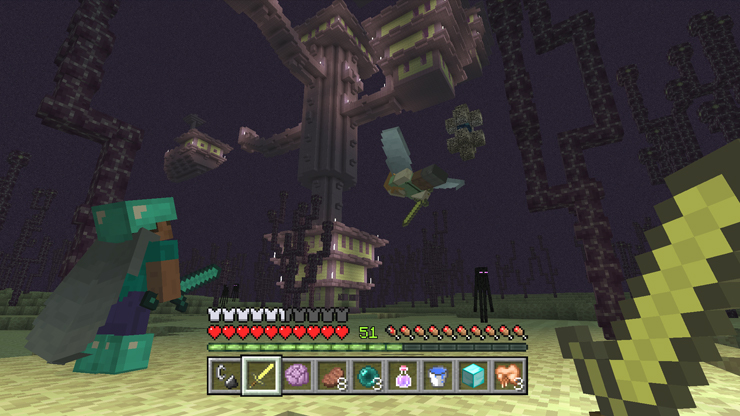 The holiday update has new items, blocks, and more. There are even some updates to the game interface and tutorial. The highlights of the big update for players are as follows:

If you’re sick of spending all your time walking on solid ground, just equip the new Elytra, which enables players to glide through the air!
You’ll find your Elytra in The End, which has been updated to include End Cities, End Ships and all the Chorus Plants, Flowers and Purpur you can handle. Don’t say we didn’t warn you if one turns out to be a Shulker.
Like potions? Use Dragon’s Breath to create Lingering Potions if you want to leave some status effects on the ground for a friend or foe to happen upon. Speaking of status effects, we’re adding a couple new ones as well – Levitation and Luck.
If you’re just getting started on a new world on Xbox One or PlayStation 4, you can turn on Amplified Terrain. This option makes the differences between mountains and valleys more extreme – so put that Elytra to good use!
More details will be shared on the Holiday Update when it launches for free in late December across all Minecraft console platforms. In the meantime, I’ll be brushing up on my winter survival skills by tossing some snowballs in Tumble.

The update will be free and will be available for all console platforms that have Minecraft: Console Edition.

Metroid Dread review
9.0
Back 4 Blood: How to unlock the other characters
Metroid Dread: How to beat the final boss
Metroid Dread: How to defeat the purple EMMI on Ferenia
Far Cry 6 | How to play co-op
How to transfer your Nintendo Switch data to the new OLED model
How to transfer your Death Stranding save file to Director’s Cut
Social Media
SUBSCRIBE
All content copyright GodisaGeek.com
Fonts by Google Fonts. Icons by Fontello. Full Credits here »
Posting....