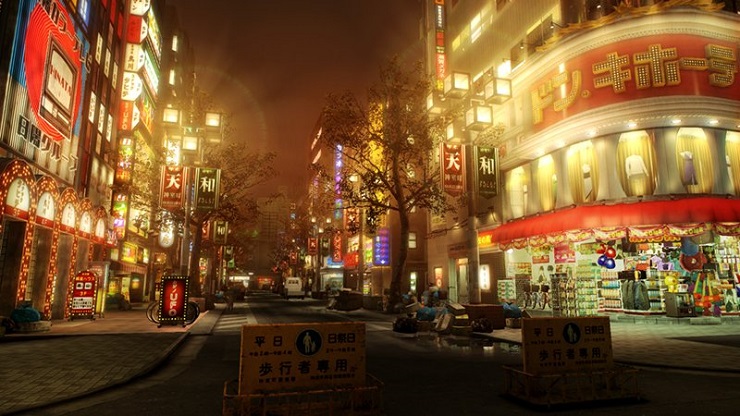 I’ve heard so much about the Yakuza series over the years, of its greatness and hilarity. A series that walks the tightrope between seriousness and zany comedy like a well-trained stuntman, but without owning a PS3 or being Japanese I’ve never been able to delve into Yakuza. However, thanks to the newly released prequel Yakuza 0, now on PS4, I’m finally able to get stuck in.

As I write this Yakuza 0 is installing  on my PlayStation (I had to delete some stuff to make room; did you know DOOM is 76GB!?!?! Seventy-Six!). This here article will be a diary on my experiences of playing a Yakuza game for the first time. It shall be updated on the reg as I get deeper and deeper into the whacky world of honourable Japanese gangsters.

So, it does have to be said, that there are quite a lot of cutscenes in the opening hours of Yakuza 0, without any actual gameplay at all aside from sporadic fights. Potentially a stupid thing to think while going into the most Japanese game I ever played, but I was a little surprised to hear that the game is voiced entirely in Japanese. Maybe I’ve missed an audio option somewhere, but for now I’m listening to the grump Kiryu, his stylish pal and everyone else they meet in the native tongue. I think I might keep it too, as it certainly makes it feel more authentic, even if I usually don’t like reading subtitles on my media. I’ve noticed this in practically every Japanese game I’ve played, but they only have certain pieces of dialogue voice acted, with a lot more just presented with text. My guess is that it would be too costly to voice act everything in games of such length, but I still find a constant mixing of the two to be jarring. Oh, and the characters don’t tend to open their mouths while speaking. Which is also weird.

So in my first session I’ve played up to the point in which you face Kuze, a leader of one of the gangs inside the family, I’m guessing. I’m enjoying the story so far, it hits with the wheels running as Kiryu goes from a manky looking alley to find Nishti and go on a mad night out. It’s gritty, dirty noir and the main story is very serious and dense. With three lieutenants trying to make power plays and all the back stabbing that comes with it. The world looks great, the city’s narrow streets which are aflame with neon lights and activity really make the city feel dingy and lived in. This opening area I’m in is small and intimate, which gives it quite a unique feel to any other virtual city I’ve visited.

The last thing I’ll discus before the end of this entrant is the combat. I don’t believe I’ve quite got the hang of it yet or a style that suits me, but regardless, the combat is brutal. It’s a little erratic, but once you get into a combo on a fool and batter him into oblivion before crushing his cranium with your boot is rather fun. I imagine it can only get better with more abilities and style unlocked. So, nobody told me I had to save manually in phone booths. In my first play session I’d died a couple of times on my way to meeting Kuze in a boss battle, so with heavily depleted health I couldn’t really be arsed taking on this kung-fu master and decided I’d take him on tomorrow. Just imagine my horror when I went back to the game today, pressed continue, and the message “no saved data” reared its ugly head.

So I stuck it on easy, skipped about 762 cut scenes and rinsed it back up to Kuze in under an hour. After dispatching the bastard handily (I’m on easy remember) and getting yet more story, I decided to have a gander about the town and see what was going down in this dingy little city.

The first load of nutters I came across a couple of lads who were working on a film set in a gourmet kitchen. These lads were in a bind because their producer had pulled a sicky which meant they were left to contend with an unruly director all on their own. Kazama was reeled into taking the producer’s place and, after getting changed into appropriately wanky clobber, he had to skillfully traverse the minefield that is film jargon. I only made one mistake, but otherwise held my own in a completely alien environment. Once filming was wrapped up we headed outside when low and behold, who turns up? It’s only the skiving producer. Well shit breaks down and it all kicks off, but not to hear, cause Kazama is hard as fuck and he battered them all like fish. Afterwards the director redeemed himself with a speech of love and fulfilling his dreams set to inspirational music and then big Kaz was away. Turns out Kazo is a great teacher and when the randy geezer came back to her dungeon a matter or two minutes later, well, the man was orgasming with every spoken word and with every crack of the whip. She’d done, bless her.

So that’s two of the many ‘sub stories’ down. I do love how they’re weird, peculiar, funny stories rather than just side missions that send me on a merry goose chase for some eggs. However, these stories being near completely text based with no voice acting does mean they can be a slog to get to.