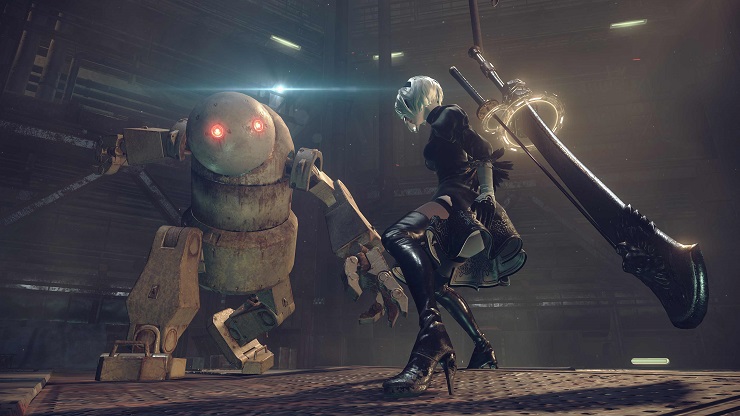 Not many series are able to survive critical and commercial mediocrity. When a game doesn’t sell as well as forecast, or doesn’t impress critics as much as expected, questions start being asked. If a game isn’t generating profit, how can a sequel be funded? Game publishers exist to make money, of course—we live in a capitalist-driven economy, and it is virtually impossible to find a publisher who is willing to take on projects purely to fulfil fan desires or scratch that itch of nostalgia. But Square Enix have decided to return to the world of NieR, the brainchild of industry legend Taro Yoko and a man who has almost reached mythological status among his fans and peers.

NieR: Automata takes place in the same post-apocalyptic world as the original title, focussing on a human-machine war that is taking place on Earth. Humans have been forced to flee and take refuge on the Moon as aggressive robots now dominate the majority of the planet. Sent down to defeat these mechanical invaders are specialised androids, one of which the player controls—a reconnaissance android known as 2B. The majority of the build I played took place within a sprawling city environment that had been reclaimed by nature—crumbling skyscrapers had their concrete frames infiltrated by the long, sinewy arms of trees, highways had collapsed under the weight of disuse, and expanses that were once public spaces are now dense in foliage, fauna and wild animals. It’s easy to forget that NieR: Automata is an open-world game, especially if you’ve played through the December demo. I found myself spoiled for choice for where to go and what to see, weaving through the towering buildings and using the mini map to visit points of interest. My horizons broadened even more as I undertook some side quests provided by various members of a human stronghold, mainly fetching items from the expanse of the city and returning them to the various vendors to allow them to start crafting. Zipping around the streets and across the city isn’t as easy as you’d think—many of the quickest routes are obstructed by impassible security gates or clusters of debris so you might have to get creative with your pathways to objectives. Also, while the game has numerous vertical landmarks that attract your attention, there are few details in more open areas that one can seek out—although the city was wonderfully constructed, it did feel rather empty and bleak at times.

Combat is everything you have come to expect from a Platinum Games title—quick, sleek and efficient. The euphoria felt when you pull off a beautiful combo, reducing a plated robot to nothing but cogs and springs all while dodging an onslaught of bullets, is unreplicated in any other title I’ve played. The combination of brute force with stylish evasiveness makes for an enthralling fight every time, and ensures that battles against enormous enemies such as the saw blades in the demo keep you invested, even if you are getting the living daylights knocked out of you. The bullet hell aspect of combat is something I’ve never experienced in a 3D RPG title, and certainly comes across as unique. While I enjoyed it to a certain degree, fans of the series or genre in general will no doubt get far more out of these sections than I ever will. Visually, NieR: Automata is astounding. The graphical design mirrors the oppressive atmosphere of the game’s post-apocalyptic setting, creating a wonderfully muted palette that forms that backbone of NieR’s visual appeal. That’s not to say that the game is awash with nothing but browns and blacks: in locations such as the city, organic greens are a breath of fresh air and add a tangible vibrancy to these more central areas. However, the game perhaps stands out most in the desert area, where 2B can blissfully slide along the golden dunes which stretch as far as the eye can see. Textures have been designed and implemented well, and the scale of the world feels enormous—the player character looks positively dwarfed when navigating among the skyscrapers at ground level. Again, my only complaint with visuals is the sometimes barren spaces one can come across when exploring.

The fact that I entered this preview as someone uninitiated in the ways of NieR and left as a man on the brink of pre-ordering speaks volumes. It may not be the most staggering RPG of its time, not in my opinion, but is certainly one of the most unique and accessible. It dutifully nails the post-apocalyptic visuals and atmosphere, and presents an interesting premise that any sci-fi fan can get on board with. Combat is pristine, and is the backbone of the entire experience—dancing my way through hordes of bullet-spraying enemies was the most fun I’ve had with a combat system in a while. For diehards, this is entirely a no-brainer, but for the uninitiated, NieR: Automata is a game that you certainly should not overlook.

Currently an English, Journalism and Creative Writing student at the University of Strathclyde. Based in Glasgow, I spend most of my free time playing video games ranging from Japanese visual novels to horror games. You can contact me at greg@godsiageek.com!
MORE LIKE THIS
nier: automataplatinum gamessquare enixTaro Yoko