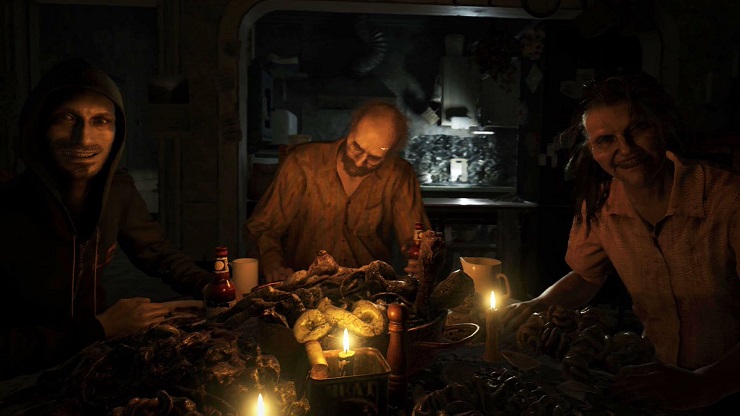 Resident Evil 7 has been out a while now, and those that have a copy are experiencing the bowel emptying atmosphere provided by your friendly neighbourhood Baker family. I’m here to remind you that, even though you may have to suffer through what the Bakers consider A-grade hospitality, things could be much worse. Read on to find my list of videogame horrors that still manage to send chills down the spine at the mere mention of them. Normally I have no problem with spiders; the fact that not too long ago I found one crawling over me and I was able to calmly pap it out the window with absolute zero squeals or passing out proves this, but when it comes to Binding of Isaac those eight-legged arachnids fill me with enough fear to have genuinely given me nightmares. I’m assuming it’s down to BoI having so many of them. There’re plenty of enemies that will spit out spiders, and seeing over ten spiders, sometimes in giant size, coming at me with the sole purpose of killing me is enough to give me the fear, and develop a slight case of arachnophobia. That’s right, I’ve included suited old no-face himself. While the myth behind Slenderman is a little unsettling, I take comfort in the fact that he is after kids, and not being a kid means I have nothing to worry about on that front. Not the case when it came to playing Slenderman, unfortunately. One of the buildings you come across could easily be a public toilet in the middle of the woods, and those things are creepy enough without having to worry about Slenderman grabbing you and letting out that high pitched noise mixed in with static sound. It doesn’t help that there’s nothing you can do to stop him and you’re only defence being a 180 turn and run. The Taken like to wander the streets and forests of Bright Falls and terrorise Alan Wake (as if having writers block and borderline stalker fans wasn’t enough to deal with). They take the age old fear of darkness and decided to envelope themselves in it, making them that much more difficult to get rid of. I spent the majority of the game whimpering, to then panicking and frantically switching between that damned torch and trying to shoot them. Having a heavy footed upstairs neighbour at the time made it sound like there was someone else in the house making things so much worse. The first time you come across one of these things is probably one of Bioshock Infinite’s creepiest settings. As you walk through an asylum version of Comstock House,  you’re surrounded by The Lunatics wearing George Washington, Benjamin Franklin and Thomas Jefferson masks. Ahead of them is the infinitely worse Boy of Silence; the look of them adds to the creep factor as they’re young boys trapped in a metal helmet that’s been strapped down and padlocked shut, presumably from a young age as they seem to have outgrown they’re clothes. The helmet has minimal features, only really having a mouth piece that they “see” out of and emit the most horrible sound.  If you can handle it there’re plenty of reaction videos online that show why it’s taken the no. 7 spot. While Nemesis himself isn’t the creepiest thing to look at, it’s more down to not knowing when or where he is going to show up that makes playing through RE3 way more tense than it needed to be. It’s like that bit in Resident Evil where the dog jumps through the window, you know it’s going to happen at some point, but you still get a jump scare when it finally happens. As if having to deal with the impending arrival of Nemesis wasn’t enough, he eventually shows up with a rocket launcher! Anything is instantly more horrifying if you give it a rocket launcher. Seeing that for the first time filled me with a feeling of dread and despair.

The Lady at the Well – Among The Sleep Now this monster is one of the few that actually made me shout out loud when I saw her. Imagine the scene; you’re playing as a 2-year old with limited mobility, in a strange lake area filled with dark towering trees and weird noises with only your teddy for comfort. Suddenly the sounds cease – the only noise is the shuffling from you crawling/walking about. Next thing you know the screen is warping, creepy violins start, and you hear a high pitched scream making you run for your life! I found it difficult to tackle this level as I was constantly running back to safety in case she was round the next corner! Look at them! Look at the dead eyes, the basically featureless face and the cold calm way it talks while it chokes the life out of you. These things are worse than the Alien! At least you know where you stand when it comes to crossing paths with the Alien, but with the Working Joes you don’t know whether it’s going to help you or jam that screwdriver through your skull. Mannequins have gave me the creeps for as long as I can remember and the Working Joes are just a “helpful” mobile version that can and will kill you! Anyone who has ever played Left 4 Dead will know the pain of forever being in fear of crossing the Witch. Even the crying sound itself is enough to stop any player in their tracks to ensure that she isn’t startled or disturbed in any way. You can always rely on the AI to charge in and attack her though. I spent way too much time being scared of the Witch to the point I’m standing still, frantically shouting “where is she? I can’t see her. She must be close!” to no one in particular. I’ve even backtracked just in case there’s another way to the safe house. There never is. Some people think the Necromorphs, or even the seemingly invincible Stalker Necromorph, is the scariest thing about Dead Space. I agreed until I came across the Crawlers. Heading into that nursery with the baby crying sound was really unsettling and was made worse when I realised they exploded when they got close enough. Having loads of them charge at you from the walls and the ceilings while making baby noises still give me the chills when I think about it. It was the worst part in the series for me. Last but not least, is the scariest thing that’s ever came out of a horror game, never mind Silent Hill: the Twin Victim from Silent Hill 4: The Room. The chat around Silent Hill always seems to focus on Pyramid Head, and while he is an intimidating character he is essentially a guy with a pyramid helmet. He doesn’t hold a candle to the Twin Victim. The baby faces are too creepy and the way they’ll stand completely still and point before doing anything is so unsettling it’s always enough to make me freeze on the spot. I do wish that the original sounds from the trailer were used as they completed the horror perfectly. The low growling-type noises they eventually settled with aren’t too bad but they feel a bit out of place. The lore behind the monster makes things worse when you find out that the siblings are the child victims of the serial killer Walter Sullivan, who killed them with an axe and left what was left of them for their parents to find. Those that have played through Silent Hill 2 might remember there being a mention of the murder of Billy and Miriam Locane from a random newspaper clipping.