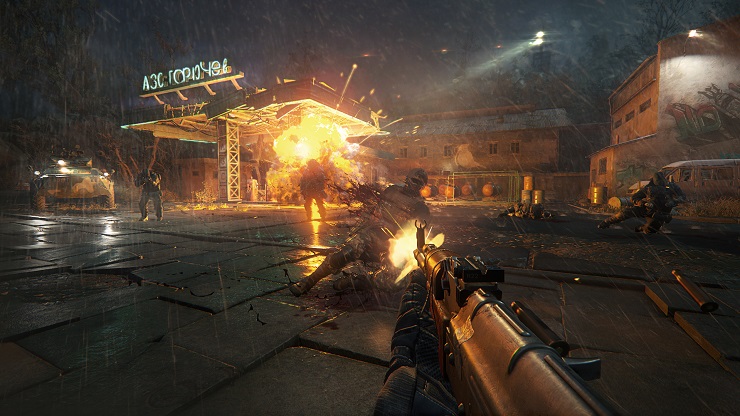 The first thing that became apparent when I sat down to play a good two hour chunk of Sniper Ghost Warrior 3, with one of the three massive maps open for me to explore at my leisure, is that CI Games has certainly listened to fan feedback after previous beta tests.

The Sniper sim, which sees you play as John North, an American sniper sent to a war torn Georgia to help squash the violence, but also to find his kidnapped brother, was delayed by three weeks so the developers could implement changes and they have been made.

Reassuringly, the build which I played ran a lot smoother than the beta reportedly did, with the frame rate remaining steady for the vast majority, allowing me to slay in style. Speaking of slaying, after beta testers complained that sniping was incredibly difficult, due to having to take into wind direction and speed, altitude, humidity and which way the bloody sun is shining, CI Games has added a circle to the sniper scope to help out those who aren’t quite Simo Häyhä.

Basically, a little circle which changes colour depending on whether you’re on target or not will appear when you’re zoomed in to your scope, instead of using your crosshairs to aim you’ll actually use the little circle, as that’s where the bullet will end up. Don’t threat hardcore players, this little dot is entirely optional and so if you like having to accommodate for the varying different factors then you’ll still be able to do that.

The biggest change of the third instalment of the Sniper Ghost Warrior series from its predecessors is that this time the map you play in is open world, rather than the on rails experience that was the first two titles. The area I played in was large and forestry, with lots of sheer cliffs and deep valleys, plenty of foliage to creep about in and enough different buildings – from a damn to towns, to keep things varied.

I’d say there are pros and cons for SGW3 to be going open world. The negatives are that, at least from what I’ve seen this world isn’t the most interesting in the world and traversing it is a matter of either just driving or walking. Open worlds are becoming more and more prevalent in gaming and I’m not sure that Ghost Warrior will do enough with theirs to really make it stand out from the pack. There are little question marks scattered throughout the map and thankfully these remain as question marks and the only way to discover what is there is by actually going there. Sometimes they’ll be hostages you need to save, sometimes they’ll be loot to gather, maybe small enemy hideouts to clear. I did stumble upon one, which upon approaching, a loud explosion went off within. I tentatively ventured inside to see the equipment for making moonshine and a poor fella who’d blown himself up. I did find that pretty cool and I can only hope there are more little environmental story telling bits like this in the massive world, otherwise there will be little reason to explore it.

What the open world does allow, however, in what is quickly becoming another trend in games, but at least a good one, is the ability to approach missions and scenarios how you want to. You have a trusted drone which can scout out the area, but it is quite difficult to use when zooming in on the camera so you can’t become reliant on it, and then once you’ve assessed the situation you can go about your work.

It being a sniper game, I mostly took the sniper route. I’d find myself a comfy bird’s nest or a lovely little shrub to spruce on up in and then I’d systematically take out large forces one by one until I could go in and mop up any stragglers. Well, when things were going well anyway! The sniping in Sniper Ghost Warrior 3 is, as you’d probably hope, the best bit about the game. It’s precise and shooting different areas of the body does do different things: I shot a poor geezer in each leg and watched him crawl about in agony before popping his skull off, for example. What I really like about the sniping though is just how deadly it made me feel. My targets never saw me coming and they didn’t hear me leave, there was nothing they could possibly do as I took position and took out my targets. I realise this sounds a bit serial killer, but trust, it’s good fun. I played on easy mode with the aim assist on, obviously, but I wouldn’t mind giving it a go without the cursor to see if I can read the wind and what not and still make the shot. I am told it is incredibly hard, though. The only bit of sniping that did feel a little jarring was that Ghost Warrior 3 has its own bullet cam. I was told that they’ve always had this, but it still felt weird seeing a close up of my bullet going into somebody’s face, when the rest of the game is taken quite seriously. Thankfully there were no x rays or exploding bollocks involved, but I still felt its inclusion to be a little off kilter. It only activates when you get a headshot, but I much more preferred the kills that I didn’t get the bullet cam with: just seeing a body drop after I’ve killed it from over 200 meters away is much more affecting than hearing a silly squelch as the bullet spats a brain everywhere.

Of course, as with every SGW game, you have three playing styles at your disposal and playing in those styles will earn you skill points to improve said styles. You can be the ghost and go in all stabby stabby hushy hushy if you like, or you can be the warrior and go in all guns blazing. Me, I’ve always prefered the sniper approach, in any game. I like doing things from a distance, cold and calculating with no risk to myself (again, just to clarify, this is only in games).

Going in loud and proud is very difficult, as the guns have realistically wild recoil and an entire army will rain fury down upon you if you give away your position, and I liked that. You are one man against an army so attempting to take them out head on should be a challenge. You are encouraged to take on all different roles depending on the situation and any mission can be achieved by doing any of them.

The only aspect of my time with Ghost Warrior 3 that stood out to me as being quite bad, rather than just alright, is that the enemy AI at times was rather bad at spotting me. The best/worst example of this was when I was in the process of freeing some captured civilians; I’d sneakily as a snake taken out the four baddies that were guarding the dishevelled church and then creeped inside to see what was occurring. I saw a soldier guarding the hostages and stalked over to take him out, but instead of pressing the stealth kill button I accidentally pressed the ‘interrogate’ button. The soldier didn’t take much convincing and he quickly told me where all his buddies were, which I thought was weird as I’d just killed them all. To my surprise a big white dot did appear on my minimap informing me that there was in fact another enemy still alive and he was actually standing right next to me also guarding the civilians.

The poor bugger apparently didn’t hear the kerfuffle and the brief interrogation, as he stood idly by without a care in the world. I stood right behind him and sniped him from all of ten centimeters away.  There were a couple more instances of the AI failing to spot me despite me being right in front of them, but this one was easily the funniest. Hopefully this is an issue that will be sorted by the time of release.

Oh, one more thing. I didn’t see much of the story, but a character called Rikell was… not very good.

Listen, Sniper Ghost Warrior 3 isn’t a game that is going to set the world alight or be the next big thing. It’s a remaining game in the long fallen through mid tier of games. It does its sniping very well, and everything else it’s just alright with. It may not be the most original or best looking game ever made, but it’s quite alright.