Preview: Here’s a glimpse of what Far Cry 5 will offer 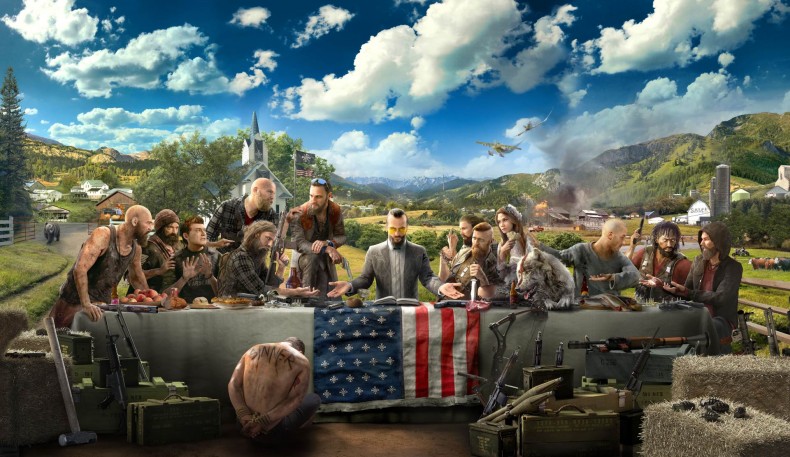 The world, ladies and gentlemen, is going to shit.

Not just because Ridley Scott won’t stop making terrible films or because the price of Freddos keeps going up. No, the world is going to shit because of things like Trump, Brexit, and the general cloud of uncertainty descending upon our lives in recent years.

THAT IS NOT OUR OPINION before you explode in a cloud of fury and Mountain Dew, storming off to the comments section to call us SJWs or liberal cucks or defend the price of Freddos. That was Ubisoft setting the scene for how Far Cry 5 came to be, showing off a series of slides that highlighted recent controversial events in the world, leading us nicely to… the almost-certainly-going-to-be-controversial Far Cry 5!

Far Cry 5 takes place in Hope County in Montana, a flyover American state that’s currently in the grip of a terrifying cult that’s slowly taking over the small town. The cult is led by Joseph, ‘the father’, and there’s a battle in Hope County between them and the residents who want to be left alone to quietly enjoy their lives of drinking Budweiser on the porch and listening to Garth Brooks albums. Hope County is a dangerous to be – there are shoot-outs in the streets, random kidnappings, and heads being dunked underwater in the name of religious fervour.

You play a deputy sheriff who arrives with two colleagues to arrest Joseph for the chaos he’s caused (interesting side-note: you’re now playing as a character you create rather than as a Jason Brody or an Ajay Ghale-type hero). Joseph goes quietly – suspiciously quietly – but the arrest goes wrong when his fanatical followers intervene.

When you awake, you find out that you’ve been kidnapped, along with your colleagues. This is where Far Cry 5 begins.

This being a Far Cry game, you escape. Okay, this is an educated guess – Ubisoft hasn’t actually said you escape but let’s assume there’s more to this game than sitting tied to a chair until you wither away and die. When you eventually fight back, some Hope County residents are happy to lend their arms to the cause, knowing you’re their best shot of getting rid of this cult that’s descended upon Montana.

There’s Pastor Jerome, armed with a bullet-proof vest and a six-shooter hidden in his Bible. There’s Nick Rye, the family man who loves planes, especially when they have a hulking mini-gun strapped to the front. Then there’s Mary May, owner of the Whistling Beaver saloon, out for revenge after the cult kidnapped her mum and her brother while laughing at the name of her saloon.
More importantly, you can play through the entire game in co-op, which is perhaps the best helping hand you could ask for. Unless your gaming buddy is one of those people who says “what? Where?” when you shout things like “SHOOT THE FUCKING BEAR DAVE” or “HELP REVIVE ME QUICK I’M DYING”. We all have them. We all tolerate them. None of us know why.

It’s a bit too early to gain any significant insight into Far Cry 5 itself, besides getting a nice peek at the setting.

There’s still wildlife roaming the lands, from cows to bears, and it’s likely they can be killed and skinned again. Vehicles now stretch from off-road buggies to more unusual fare like tractors and crop duster planes, which hopefully we can fly. Snipers are perched upon water towers, watching over the land. Some of the cult have set up bases on top of shops and restaurants, keeping eye for intruders. The setting is novel but Ubisoft isn’t saying if that same freshness will stretch to the gameplay. Not yet anyway.

In other words, it’s just too early to tell what to expect from the gameplay itself, the thing that really matters after the Far Cry 3 > Far Cry 4 > Far Cry Primal cycle dulled the series’ shine through stubborn repetition. It’s difficult to pluck much from this early trailer. It’s good fodder for something like ‘Six Things We Want To See In Far Cry 5’ (#1 We want to punch a bear in the face. #2, #3, #4, #5 and #6 We still want to punch a bear in the face.) but hopefully the next reveal will show something exciting on the gameplay side to match the setting. Maybe we can ride a bear! Build our own base! Start a petition to lower the price of Freddos!

We’ll have to wait and see.