FIFA 18 is building on the big changes from last year 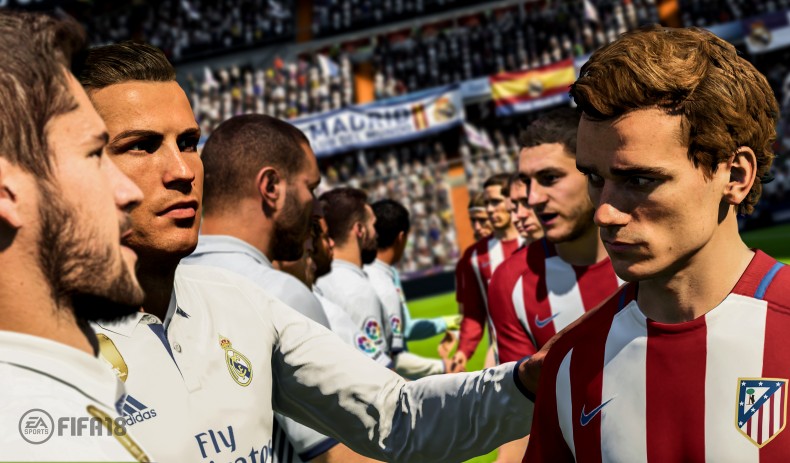 There is a lot to like in FIFA 18, but when creative director Matthew Prior says that FIFA 18 is the “single biggest leap forward in gameplay ever seen” you have to question what FIFA titles he has been playing for the last 20 or so years.

Whereas FIFA 17 was a massive leap forward for the series, with the switch to the Frostbite engine and the introduction of The Journey, FIFA 18 is more of a step in the right direction. There isn’t that many major new gameplay features, and some of the things they are touting as the big changes will sound a little mundane to the more casual FIFA fans. But when all of these small new features come together FIFA 18 certainly feels a lot better to play than its predecessor.

Perhaps the most notable new gameplay area is the overhauled animation system, which is described to us as similar to the move from HD to 4K in the world of TV. Whereas previously it was only possible to change a player’s animation every step (as in physical step they took), it is now possible to change that every frame. This means that changing direction quickly is a lot easier.

When an attacker is running at you with the ball, one quick move to the side could previously see them skip past you if you had planted your defenders foot on the wrong side. Now it is possible to react to their movement before that foot has even been planted, meaning it should be a lot harder to easily run past defenders. This change is less noticeable when you have the ball at your feet, but it certainly feels a lot easier to shift the ball around at a moment’s notice.

Also tied into this is more realistic movement for certain players. The FIFA team seems to have gone big on Real Madrid this year and part of that involved going to do motion capture with Cristiano Ronaldo. If you look at Ronaldo running in game it is eerily life like, from the running style to his dribbling technique. It looks great to be totally honest.

While they haven’t been able to motion capture with every top player out there, the new animation system behind the scenes has allowed them to recreate certain player’s movement style. Raheem Sterling runs with his hands up near his chest, just like in real life. Only a few players seem to have this, but it is noticeable if you know where to look.

Elsewhere teammate AI has once again been improved, and this time it was actually noticeable from the off. Whereas previous FIFA iterations have often felt like you had one option to play the ball to, now there will almost always be at least two. The technical demonstration showed that most of the time when playing in the opponent’s half, two players will move forward to look for the ball, while one will always try and make himself a safer option behind or to the side. It doesn’t always present a ton of great options, but it no longer feels like you are looking for that one killer pass the game wants you to play.

Elsewhere on the pitch there are quite a few small tweaks. Volleys have been improved and supposedly they are changing values to result in more wonder goals. This was clearly turned up to the max for our preview session, as a ton of absolute screamers were flying in during every game. Fingers crossed they tone that down a wee bit. There is also the return of the slow dribble, meaning a simple change of pace can be all that is needed to beat a man, and hard tackles have been added as a middle ground between the feeble standing tackles and crunching slides. Bigger changes have been implemented off the pitch. Arguably the coolest new feature is the introduction of quick substitutions. When the ball goes out of play with a simple tap of the right trigger you can bring up a quick menu of up to three pre determined substitutions. With a further tap of a button once you have selected the desired change the fourth official will pop his board up and your new player will take to the field in seconds. Prior to the match you can set up these quick subs as your please, or you can use EA’s suggestions based on fatigue, behaviour in the game and other factors. It is SO much easier than having to go to team management to make a single change you knew you wanted to make from the start of the match.

Another off the pitch change is to some of the stadiums themselves. The team has put in a lot more effort to make the iconic locations feel like they do in real life. This means custom chants for stadiums, additional features such as litter appearing on the pitch, real flags fans bring and extra pitch side surprises such as a random car. While we only got to see a couple of examples they did look very good, and certainly had more of an atmosphere to them.

Changes to the lighting systems also mean that some of the in game shots look amazing. In fact, one of the most noticeable improvements is how things look both on and off the pitch. Although the crowd themselves only look a little improved, despite that supposedly being a big focus. You can celebrate with them when you score though, even if you are the away team and want to celebrate with the home fans. They are surprisingly receptive to it.

While we didn’t get too much info on the game modes side of things we did find out that The Journey is returning for season two, and Alex Hunter is once again back. We got our hopes up when it was mentioned you can now customise Alex, but all that actually means is you can select things such as his clothes, tattoos and hair style. The team wouldn’t give us specifics, but this year’s offering will apparently go further than the top two english leagues, and with EA’s new bestie Ronaldo confirmed to appear, we expect some kind of European jaunt to be on the cards. The Journey 2 will feature a lot of new footballing celebrities and big name players, hopefully they all put in performances on par with Harry Kane’s award worthy performance in season one. Interestingly there will also be at least one other playable character, although we have nothing else to go on other than that. We have also been promised a branching story, but our guess from the trailer is that the choice is to say with your team or move elsewhere. We would love to be surprised on that however.

Finally a quick word on FUT. Once again we know literally nothing about the new features or player ratings, but we do know that Legends are now no longer exclusive to Xbox One, and will appear on both the PS4 and PC. To continue with the Real love in, Ronaldo (the World Cup winning Brazilian one) has been announced as the first legend on offer.

So then, there are quite a few areas that have changed, but the one thing we couldn’t get out of our head whilst beating former GiaG staffer Colm Ahern, is that it didn’t feel that different. Sure it was better, but with last years wealth of new additions and significant changes, this felt a little underwhelming. There isn’t a new headline feature like The Journey, and there isn’t the monumental gameplay shift that Frostbite brought with it. There are just improvements, which at the end of the day, are difficult to complain about.