Sonic Forces has an electric whip, and is a confused game 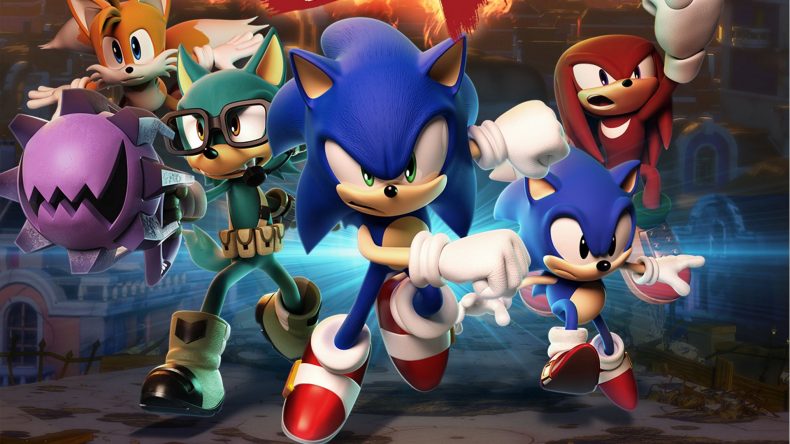 Hey, guess what! Sonic Forces has an electric whip. It also has a flamethrower. Both are part of Sonic Forces’ Avatar Mode, where you get to create your own character. If you’ve always wanted to play Sonic as a rabbit creature wearing a camo tank top and breathing mask, torching enemies with a flamethrower, now you can. Same if you’ve always thought Sonic would be better if you could play as a cream-coloured bat wearing pink shoes and a sports visor, cracking an electric whip at Robotnik’s forces.

If it sounds confusing, it’s because Sonic Forces itself is a confused game. Like Sonic Generations, this has ‘Classic’ Sonic levels (strictly 2D platforming affairs) along with ‘Modern’ Sonic (3D outings that switch between racing in and out of the screen along with 2D platforming sections).

The tone is edgier than Sonic Generations, from the color palette to the music to Knuckles shouting gibberish about Shadow The Hedgehog while you race through each level. There are Red Stars dotted throughout, hidden collectibles for enterprising players (or something you’ll stumble on by accident until you learn the stage’s layout), and more spike obstacles than you’ll know what to do with. Christmas has come early for whatever spike factory Robotnik orders from, as this is the most spike obstacles you’ll ever remember seeing in a Sonic game. Sonic Generations proved that Classic and Modern Sonic can co-exist and even thrive if the levels work and the tone is right. But the main problem with Sonic Forces is that the levels don’t seem to ‘flow’ that well.

Talking about the ‘flow’ of each level sounds like airy-fairy-I-haven’t-got-a-real-criticism-to-make-so-this-wishy-washy-BS-will-do nonsense. In this case, it’s fairly apt. There’s a lot of having to check your speed in ‘Classic’ Sonic levels to avoid the obstacles and pitfalls, along with a lot of stopping and starting in ‘Modern’ Sonic levels because you missed a homing attack on an enemy. It’s not really a case of ‘git gud’, even though playing and learning each level does solve those problems. It’s that the whole ‘git gud’ learning curve isn’t that much fun.

The lack of flow through each level is true even when playing with your own created character. Along with the weapons, you can equip skills such as the ability to explode into the air or turn into an electric ball of death, slamming through enemies. The idea is that these skills allow you to tackle levels in different ways, using the explosion leaps to reach higher platforms, as one example. But it still doesn’t really solve the stop/start nature of each level and it doesn’t make level replays that much more enjoyable while learning the fastest routes. At least there weren’t any complaints about the boss that Sega is showing off right now: Egg Dragoon. This hovering Robotnik machine attacks you with a mini-gun, spinning drills and blocks.
Amongst the blocks are boulders that sit on the ground. You need to wait for Egg Dragoon to line-up with the boulders, then spin attack them back at Robotnik. Interestingly, you can’t recollect your rings when you lose them. There are only six rings on the screen, so it makes sense to collect one and try and leave the other five to collect in case you do get hit. It adds a new tactical element to the boss battle and, for once, makes it quite challenging.

But Sonic games need more than boss battles to thrive and there’s not much else in Forces that inspires hope. It doesn’t help that Sonic Mania exists alongside it, a better Sonic game simply by virtue of stripping everything back to the 16-bit glory days.

Sometimes you can add more by subtraction. You certainly don’t add more by throwing in electric whips and flamethrowers.