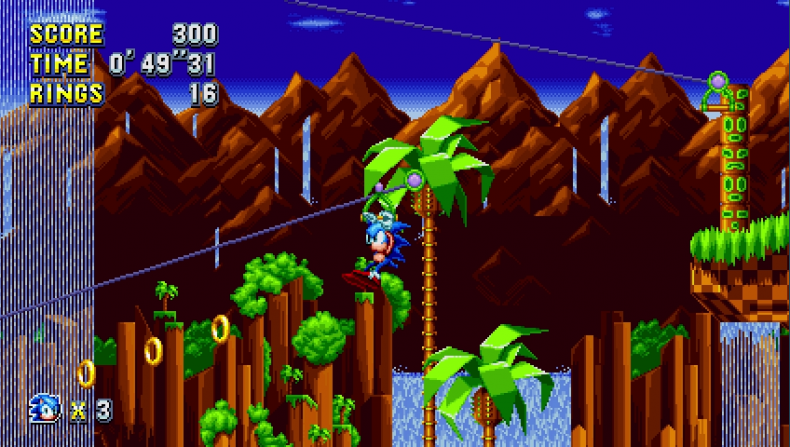 So to answer your two questions, yes Sonic Mania is really good and yes, it’s just like the old ones on Mega Drive.

Are we done here? I think we’re done here. Because that’s all you really need to know. Sonic Mania doesn’t even need a full preview explaining this further. Hell, that intro works as a standalone tweet, and it still has 25 characters leftover for a @SEGA_Europe tag/reaction gif/#hashtag #content #seo wankery.

Imagine, if you will, that SEGA made a sequel to Sonic & Knuckles after its near-perfect run of Sonic outings on the Mega Drive. That’s what Sonic Mania is, starting with a nostalgic trip through Green Hill Zone and ending up in new zones such as Studiopolis and Mirage Saloon. Studiopolis is themed after a film set and feels like an updated version of Casino Night Zone from Sonic 2, with cute touches such as a popcorn machine and camera crew van that beams you around the level. Mirage Saloon is a Wild West level, with spinning chairs, a giant piano you can run across and a pistol that shoots you into the air. Both levels feel like classic Sonic stages, playing like clever pockets of level design and obstacles being stitched together for Sonic to race through.

But for older Sonic fans, the real treat comes from the fresh takes on old zones. Green Hill Zone’s end boss is the perfect example. Remember Dr. Robotnik at the end of Green Hill Zone? After watching you race through loop-the-loops, leap over spike pits and smash through his minions, Dr. Robotnik decided what he needed to stop Sonic was a ball that slowly swung from side to side while he also gave you two platforms to make avoiding it even easier. Literally everyone in the world has played Sonic The Hedgehog, whether it was on Mega Drive back in 1991 or buried on your smartphone between your Tinder and Snapchat apps, and everyone will recognise the old beats here. Starting each level by holding down and mashing A. The desperate scramble to recollect rings every time you get hit. The sound of Tails constantly dying.
There’s no titting about on a hoverboard, no Big The Cat, no cutscenes.

It’s also hilariously tragic to think that for all the Sonic games over the years where SEGA has half-heartedly talked about taking Sonic back to its roots, it’s taken them this long to actually do it and proved they’ve known how to all along.

It’s been easy to assume SEGA misplaced the Sonic elixir somewhere in its offices and now its resurfaced, all these years later, with Sonic Mania proving that they still know how to make Sonic games.

All you need to know is yes, it’s really good and yes, it’s just like the old ones on Mega Drive. Just like I said.