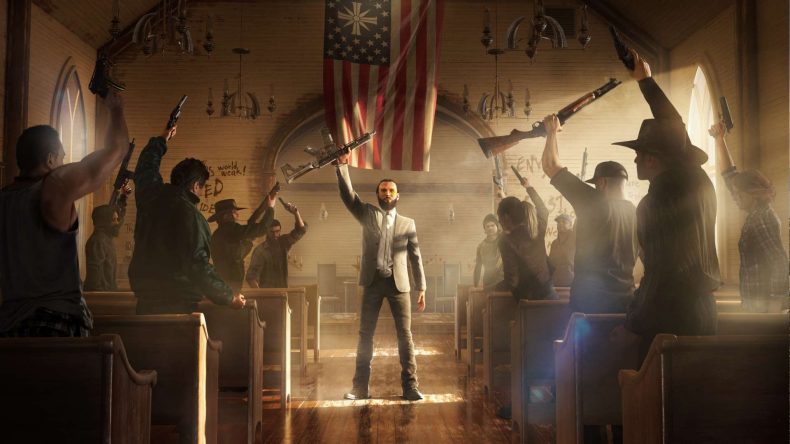 Trying to talk about Far Cry 5 without mentioning the possible political motivations and the commentary behind it would be a damn near impossible dance. After release the internet will be littered with Death of The Author articles and deconstructions, but right now, trying to discuss the games intentions before anyone has actually managed to play the whole thing would be pointless speculation.

Now that the zeppelin has been addressed, we can move on and talk about the game itself for a bit. Set in Montana, the aptly named Hope County is this iteration’s chosen battleground and after some hands on, an iteration is currently the best word to describe Far Cry 5. For better or worse the moment to moment actions remain largely unchanged. I’m a believer that change for changes sake should be generally avoided especially when the working formula is still gold.

My session involved me playing a few missions, some free roaming time, and liberating the now well recognisable town seen at E3. Options were aplenty as to how I wanted to approach it with a bit of exploration revealing new avenues of attack. Setting up your buddy sniper to provide support from the nearby water tower, stealthing it up and taking out watching sentries with the best partner, the dog, zip lining into the enemy’s midst submachine gun in tow, or my own personal favourite, calling in a bombing run on the public execution via the a bearded pair of aviators. The increase in size of these liberations from 7-man guard posts to a couple of residential and commercial blocks makes the engagements feel less Che Guevara and more Uncle Sam. Thematically, if not mechanically, Far Cry 5 differs from previous titles.

Your main mode of transportation is by a monstrous and, as of yet, unnamed truck. This ostentatious beast is emblazoned with the stars and stripes and a bald eagle, it is the most fitting abomination to ride into battle and its overwhelming power on the road couples nicely with your military grade weaponry. Driving around the open world and bestowing freedom upon your enemies is as ludicrous as it sounds, I truly hope Ubisoft do explore the elephant in the room to its fullest, I feel it would be a wasted opportunity if they shied away from it.

Compounding on freedom even further, the demo ended by taking to the skies and dropping bombs on barns and homes and a vehicle convoy which culminated in a dogfight with “The Chosen”. As much fun as the aerial battle was, your control over the plane is rather limited, it will always try to level you against the horizon and prevents you from flying upside down or pitching the plane for tighter turns.

This only became a problem because the enemy aircraft did not appear to have this limitation: he was playing by a different set of rules and was able to perform maneuvers I physically could not. There are still many months to go so I hope the option for full free movement will be in the final release.

Far Cry is still as enjoyable to play as ever, the freedom of choice and playstyle has been expanded and the buddy characters have become bigger players in the grand scheme of things. Speculation will remain for now, on what Ubisoft will make of the opportunities this volatile setting grants. It’s closer to home for many, and I will be greatly surprised if people don’t misconstrue a trailer and attempt to boycott it the same way they unsuccessfully boycotted the recent Star Wars films. The internet is abuzz and even though I chose not to play the spin off title, Primal, I’m looking forward to my return to Hope County next year.