Everything you need to know about Destiny 2 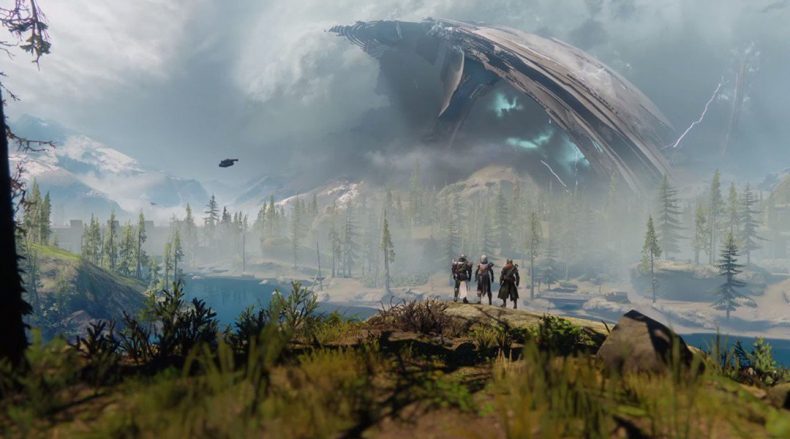 Bungie promised us Destiny 2 would be bigger and more full at launch than its predecessor, and so far that’s turning out to be true. The overall story doesn’t seem much longer (I hit the current soft level cap of 20 and finished the story in around 12 hours, with some messing around in between), but the gameworld itself is certainly busier. There’s so much going on, in fact, that it feels like Destiny 2 throws a new activity at you every hour or so.

To help you out in the new fight against the Darkness, we’ve put together a quick guide to what’s new in Bungie’s highly-anticipated sequel. Oh, and spoilers ahead.

Since the Tower is now a pile of smoldering ruins thanks to an invasion of ‘roided-out rage rhinos, the Vanguard have taken refuge with the common folk of Earth out in the sticks.

The Farm is a peaceful, idyllic commune, and your new social space. Within its leafy embrace, you’ll find everything you need. Lord Shaxx, the Crucible Gunsmith, and the three Vanguard leaders all reside in the main structure, while merchant and quest-giver Hawthorne waits with her sniper rifle and falcon on the top floor. Opposite you’ll see your Vault and Postmaster, Tess Everiss’ emporium, and Tyra Karn, who’ll decrypt your engrams for you.

The Faction system in Destiny 2 is similar to the old one, except the Faction leaders are scattered around the galaxy, one for each of the main planets. This makes it easier to grind tokens which you hand in for rep and rewards post-20.

You’ll unlock them by running through the story, and you can easily fast travel to them when you need to. These are like multi-part patrol missions. Marked as an orange sword symbol, Adventures take you on little excursions around a given area and reward you at the end.

Some of them are pretty cool too, asking you to set an ambush for the Cabal, chase down Fallen thieves, or set up commnication networks. They’re handy when you fancy a quick blast but don’t feel like playing a story mission.

Remember looping the same few areas over and over in Destiny 1, or having to install an app just to see when the next public event would be available? Well, those days are as dead as Eris Morn’s beauty career.

Rally Points are flags marked on the map that denote the location of Public Events. “Rallying to the Flag” activates a timer, which counts down to the event, meaning you can go off and do stuff while you wait. Awesome, right? Yes, it is awesome.

Yup, they added fast travel. No longer do you have to go to orbit to travel to a mission, or return to the social space to hand things in. You can now open the director and travel anywhere within the world you’re on.

Not only does this reduce frustration and speed things up, it also makes up a little for the lack of a Sparrow (Destiny 2’s zippy little speeder-bikes aren’t available until post-20). Marked by little double arch symbols on the map and daubed on walls or rocks in the world, Lost Sectors (of which there are 26 in total) are tiny little dungeons harbouring a bunch of baddies and a boss.

Killing the boss gives you the key to their cache, which contains tasty loot to hoover up. Further challenges such as timers or specific kill targets would be appreciated, but for now they’re just another little aside next to Adventures and Patrols.

This is a weekly event which calls for you to complete multiple public events in a given zone for powerful rewards. As you’ll no doubt be running plenty of PEs anyway, Flashpoints are pretty handy.

There are also “Heroic” triggers in many Public Events, which introduce a tougher boss and better rewards if you activate certain parameters during the Event. It’s entirely optional, or accidental, but it adds another layer to proceedings.

The former are daily quests that replace bounties. There are 3 randomly assigned for each area of a world map, and completing them will earn you Vanguard Tokens for Zavala.

The latter allow you to replay story missions after the campaign is done. Every day, Ikora will have three random missions to replay which grant you Research Tokens to hand into the Warlock Vanguard. At first, I was afraid. I was petrified. If I had a Launcher on, I couldn’t have a Sniper by my side.

At least, that was my reaction. Upon further investigation, however, I discovered that it DOES kind of make sense, especially for PvP. Now you have Power weapons like sniper rifles, shotguns, launchers (rocket and grenade), and swords all in one slot. The other smaller arms come in two flavours, Kinetic & Energy. So you could rock two auto rifles if you like, or two submachine guns, with different effects for shields or flesh.

You can also now modify weapons and armour to do things like reduce cooldowns for particular subclasses, or increase shield regen, among other things. They come in weapon caches from Tess Everis, as activity rewards, and of course, because it’s 2017, you can buy them with real money in the form of Bright Engrams which may or may not contain them.

While the cap of 20 seems low, it’s likely in place to allow for increases through DLC. In the meantime, you now have a “Power Level” which replaces your Light Level. XP translates into Ability Points now, which you spend on nodes in the subclass skill trees. It’s not totally freeform, but it’s easier than having to have a certain class equipped to earn XP for it.

The Subclasses unlock differently too. At or after levels 7 and 15, a class “Relic” will drop. Level it up by killing enemies and completing activities, and you’ll unlock a mission at the Shard of the Traveller where you get to play with your new skill and murder lots of aliens.

Given how popular Clans were in Destiny 1, it seems a no-brainer for Bungie to give them more attention in the sequel. Now they’re fully integrated into the gameplay and you can earn XP for your Clan that rewards you all with perks throughout “Seasons”.

Additionally, completing challenging activities like Nightfalls with your Clan rewards all members, and it makes matchmaking much easier. Although you can now take part in Guided Games, which link you with Clans for Nightfalls and Raids if you don’t have one. All in all, it’s a much friendlier game for soloists and team players alike.

Senior Content Editor Mick has been playing games for over 30 years and writing about them for around 12. After drifting from site to site for a while, settling briefly at the now-defunct Made2Game and freelancing for the gone-but-not-forgotten NintendoGamer Magazine, he came at last to rest at Godisageek. Mick has been a reviewer, staff writer and content editor here for some time, while also moonlighting a little for Red Bull Games. He has 4 kids, has written 2 novels, and sometimes even manages to pay a bill or two. You'll usually find him defending the galaxy in Destiny 2, battling evil in Diablo 3, or lurking in the background on Twitter. Find him there @Jedi_Beats_Tank, or on XBL (JediWaster247), PSN (Jedi_Waster) or Nintendo (JediWaster).
MORE LIKE THIS
BungieDestiny 2