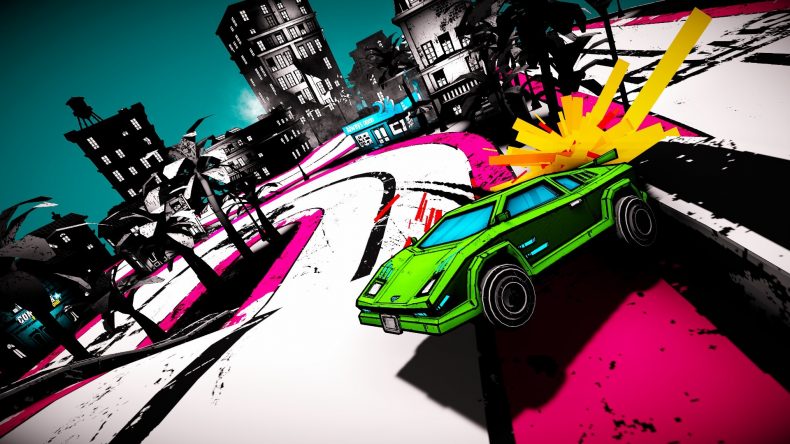 Ask anyone who played games in the early 90s, one game that they’ll most likely remember is Micro Machines because it’s one of the greatest multiplayer racing games from this era. It was seminal for many of us who grew up on the NES/SNES or Mega Drive and with good reason; it allowed us to race around a world that was taken straight out of Honey I Shrunk the Kids. Street Heat is a modern-day remaking of a classic style of racing game with a decidedly retro aesthetic – which might be the most oxymoronic thing I’ve said this week.

Diving into the game you are instantly greeted by a gorgeous retro design of black and white tracks dashed with stark shocks of neon-bright greens, blues, or pink accents to make everything pop out at you. Your ears are then quickly assailed by the pumping notes of retro/synthwave that gets you bobbing your head and ready to race! You take to the track, engines revving, with the goal of being the first to reach 20 points over the series of the races. Each race will see you netting points based on your position across the finishing line and an additional point is awarded to the person who clocked the best lap time. Destruction is a very real possibility – whether by driving off the track into oblivion or collide with a fast-moving train that cuts the track – and should this fate come to pass, you will gain exactly 0 points.

The tracks are small, creating fast-paced races and a real sense of jeopardy when that opponent in the neon green car takes lead and flashes a smiley face emoji at you. I consider myself a level-headed person, but this was the last straw. I tried to ram him off the track, missed by a whisker, and ended up hurtling into oblivion myself. Oh hubris, how you teach me lessons regularly and without sugar coating.

There are a small selection of maps that are voted on between races and these are quickly learned, and the only variance you’ll see in the tracks each time you play them are the randomly placed hazards like the trains and oil slicks, but these are easy to avoid or overcome so the level of challenge that they offer is relatively small. The biggest factor to the challenge in a race is knowing the tracks, your opponents’ driving skills, and how much you budge and push with them. As is the way with racing games in general, if you tussle with another racer, prepare for it to go horribly wrong just as much as it can go right. Street Heat is one of those attempts at filling the ‘couch co-op’ niche that’s been fading out more and more in the past decade. It does also offer those of us whose friends exist across the globe the ability to play together online. The best of both worlds, but I very much appreciate the addition of local multiplayer in games perfectly suited to house and dinner parties with mates.

Currently with the game in Early Access on Steam, there’s not a great deal to keep me coming back for more, but I had an immense amount of fun playing! Development on the game appears active and with a quick turnaround of patches and hotfixes so far, so here’s hoping they will continually develop on what Street Heat offers and realise its potential as an incredibly fun throwback to the racing games of yore. I have high hopes for it, and will be eagerly awaiting its full release.