How to play with your friends in Monster Hunter: World 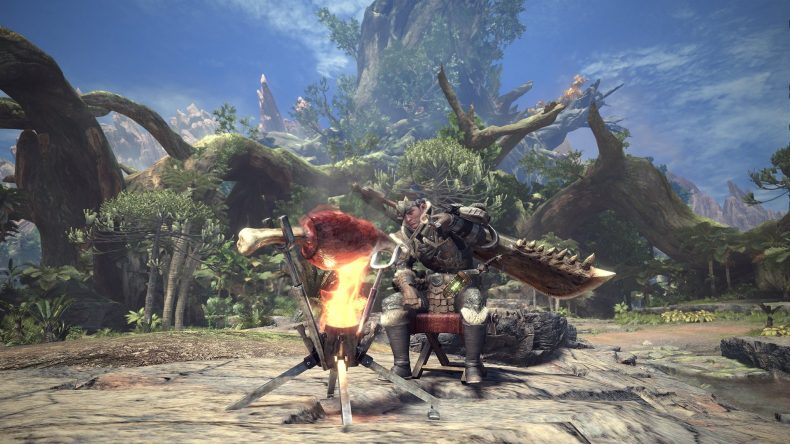 There are two main things you need to do in order to play with friends, and the easiest way to do so, is when you start your game, start a private match that is invite only. The main game loads in online mode, and this is like an instance of the world, so setting it to private/invite only (or even passcode locked if you want) means you won’t get any random folks joining your hunts. Once the game has loaded you in, hit start/options and go right a few steps and invite player. It’ll bring up the friends list and you can send them an invite to your instance.

That’s the easy part done, this gets you and your friends playing in the same “world/instance”. Another way to do this is to visit the top deck of the hub and create a squad (guild) and invite your pals to that. From there you can search for a squad “session” (read: instance) when you start the game, removing the need for a private match but keeping it to the people you’ve approved for your squad. That top area, by the way, is the only place to spend time and see each other outside of quests, too, so sit down and have a beer together! From this point, you need to go to the quest board and pick a quest. Once you’ve set the quest parameters, and chosen a starting point, the game will automatically tell your friends that a quest has been selected and they can choose to join you or not.

But it’s not that simple most of the time, and here are some key points:

Firstly, you can only play quests that you are high enough level for. So if you’re selecting a story mission ten hours in, and your friend has just started, they won’t be able to play, they need to be high enough in their hunter rank.

Secondly, if you’re choosing a main quest, they won’t be able to join you until the cut-scenes have finished. Yes, we know, this is archaic and ridiculous, but for now that’s how it is. The best way to do this (and again, this is a stupid, backwards-ass way of doing this) is to get into the quest to the point where the cut-scenes have finished, then quit the mission. If you’re both doing this at the same time, you can quit out together. After this, once you’ve seen the scenes, you can both start the quest together. Hopefully Capcom patches this, because so many games nowadays allow you to play story missions in co-op and watch cut-scenes together – it’s ridiculous. The alternative way is to fire an SOS flare once you are in the mission. In theory, if you’re in a private instance, your friends should find you quickly and easily.

In terms of free-roaming, there is currently only one way of doing this, and it’s equally irritating and needs fixing. Select an optional quest that is very easy to achieve (find 20 mushrooms, for example) and go do that with your friends (post the quest, let them join the online quest, as per normal). Once this is completed, you can return to the camp together and that puts you in expedition mode, which allows you to free-roam and hunt to your heart’s content.

The only downside is that eventually certain monsters will “leave the area”, so you can get 1-2 big guys hunted before having to leave the expedition and start a new optional mission, and repeat this method over and over. It’s daft you can’t just free-roam together in your world, but again, so far, that’s how it is. We discovered this completely by accident, as even if you head up to the social space on the top floor of the hub and launch an expedition, you don’t go together, you all go in separate individual ones.

These are the ways to play online, and yes, we’re desperately hoping Capcom addresses these, because it’s ridiculous that a game built from the ground up for teamwork is so limited in how you can play with friends. Here’s hoping, right?