previous
A Plague Tale: Innocence has a dark tone, and an interesting take on the horrors of war
random
next
Masters of Anima is a lovely little surprise of a game
0 comments

Vampyr has some interesting mechanics, but still has a bit of a way to go 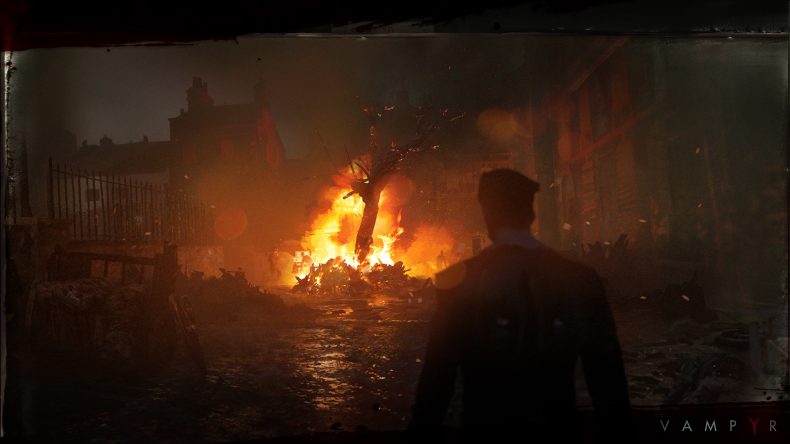 It’s always a shame when you finally get your hands on a game for the first time, after you’ve been following it for years and have always liked what you’ve seen and heard, only to be left sadly disappointed by it. While I still believe there is a lot of potential in Vampyr’s core concept and that longer time needs to be spent with it to fully see the effect of your decisions, from the two hours I spent playing I felt the excursion in a number of key areas was well off the mark.

DONTNOD’s follow up to the critically adored Life is Strange sees us go from leafy American suburbia to the dark, gritty streets of post-World War I London at the height of the Spanish Flu pandemic. You play as doctor-come-recently-turned-vampire Jonathan Reid. As needing to kill and drink people’s life juice to stay alive clearly contradicts his life’s work of trying to save people, Reid has got himself in quite the bind. So, sporting his Olivier Giroud-esque hair and beard combo which I’m certain nobody was wearing back in 1918, he tasks himself with researching the vampire outbreak and bringing it to an end. The really interesting aspect of Vampyr is that in order to grow stronger as a vampire and learn more skills you have to drink blood. But the people you’ll be eating aren’t just random NPCS. No, each of the four areas of the game are populated with loads of fully realised characters that have their own lives and you can talk to every single one of them in depth about said life. So killing someone to feed on them will have a consequence of some kind, depending on that person’s importance in the local community. Each area has a hierarchy of importance for the characters within it, with “Pillars of the Community” being the most important. Killing them and too many other characters will lead to the community’s stability plummeting and for it to be overrun with beats. Kill a pub landlord who keeps his doors open all night for those in need? Then the pub will shut down and the community will suffer.

The developers have added a clever system that prevents you from just flat out killing important story characters just straight away, however, with the Mesmerise system. In order to kill someone you have to first mesmerise them so you can lead them to a dark corner to do the deed. Some characters require a much higher level than others in order to be mesmerised, thus preventing you from ruining the story. While I really, really like this concept of you being able to properly talk to and kill every character in a region, I just thought a lot of the dialogue writing and the voice acting was so poor that I was constantly dragged out of the moment. So many of the conversations were littered with really stilted dialogue that felt so disjointed. For instance, a barman said to me: “have you heard about the murders?” and Reid replies with: “tell me about these murders?” Absolutely nobody in reality talks like that! There was no sign of surprise or horror, just repeating what the barman has just said. There was umpteen examples of this and when so much of a game involves long conversations, when there is so much talking, it’s imperative that it’s engaging throughout. Oh, it’s especially weird when you notice that the top half of characters’ heads don’t move at all.

But yet another part of Vampyr that I really love is that you don’t have to actually feast on any of the characters at all, you can keep to your Doctor’s code and never resort to murder. This, though, makes the game so much harder as leveling up becomes a near impossibility. I went down this route in my play through (which is why I can’t speak for if killing characters actually does make a noticeable difference, but I don’t know if it would in two hours regardless) and by god the game became so tough, so quickly. I was only two levels below the Skals (bad vampires who have no control) I was facing but they were kicking my arse. So this idea of trying to resist the urge of blood, but making things harder by doing so is a really interesting concept and a nice thematic idea that Vampyr is wrestling with. Yet despite this, the second biggest aspect of Vampyr – combat – was also a disappointment as well. Now, I will cut some slack as I had made things harder for myself by choosing not to feast and so I didn’t get access to some upgrade attacks (even though most of the skills on the skill tree were really boring stat increases that you don’t see), but regardless I found the combat to be repetitive and dull. There’s just one optimum way of dealing with enemies, so there’s never any variation. You start by stunning them with your second weapon which allows you to bite the enemies to charge up your vampire abilities or regain health and then you hack at them with your first weapon and throw in the occasional vampire attack until they fall over dead. The dodging, which allows Reid to zip about in a puff of smoke, spices things up a bit but not enough.

It’s a shame because I really like a lot about what Vampyr is about. I do believe there is a lot of really cool, interesting concepts here that could lead to an interesting game. But from the two hours I’ve played at this preview stage the excursion of the combat and dialogue lets the interesting aspects down. Hopefully things can be improved before release.