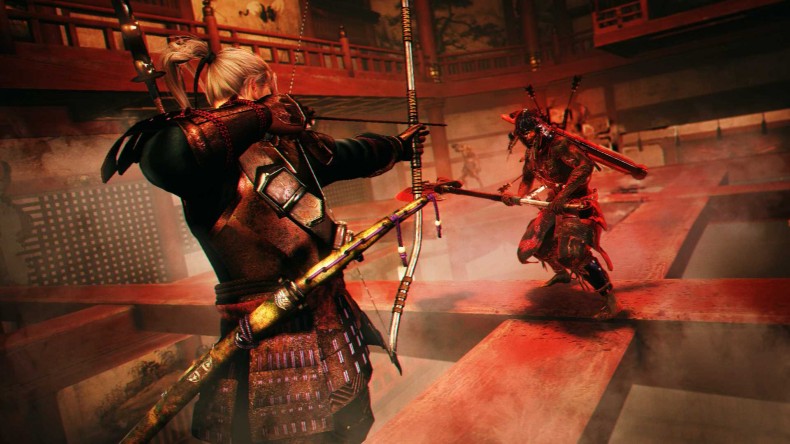 An enemy is hunched over a dead body, with its back to me, preoccupied with rummaging through the corpse. I gradually creep over, knowing an undetected back attack is my best chance. As I near them, my heart beats a little louder unsure if I’m moving slowly enough to avoid detection. I’m almost upon my prey, they’re within striking distance, and I unsheathed my dual katanas as smoothly as possible and brace for attack. Another step forward and my foot moves with the floor more than it should, there’s a slight sound of stone on stone, and without warning three flaming crossbow bolts pierce my back in quick succession, and before my unsuspecting target even notices I’m there, I fall to the floor beside it, dead.

Dead. Again. Nioh has claimed me once more, but this time I’m part raging, part gleefully smiling at the sheer audacity and sweet design of the trap I so foolishly fell for. This was the first time it happened. It wouldn’t be the last.

I’ve been playing Nioh a lot recently, and I’ve found myself in a very optimistic mood as I journey through Team Ninja’s romp through feudal Japan. And that’s not just because the lead character is as wooden and frown-focussed as an Irish version of Kiryu Kazuma, although that does make me smirk. No, the reason for my positivity is because this game is a clear indication of a bright future for a sub-genre, that some may feel has peaked and is on an inevitable downward spiral. A spiral that started once the Ashen One put an end to the Soul of Cinder (or Slave Knight Gael for the DLC fans).

Yes, the Dark Souls series (and include Demon’s Souls too if you prefer) is what I’m referring to. It’s had an undeniably profound impact on gaming over the last decade or so. The series has received critical acclaim, and a legions of loyal fans who have dedicated many hours to the franchise’s intricacies, even eccentricities within its now well-established formula. It’s now arguably its own sub-genre, a name for which is still up for debate, with perhaps “Souls-like” being my most palatable option.

And it’s no surprise that such a beloved and successful sub-genre gets noticed and considered by other game developers. What From Software started, others will try to follow and replicate that adoration and dedication from fans. But the problem that most have found is that From Software didn’t simply succeed because they were first, but because the overall experience netted together to create a seamless, wholesome experience. By copying by numbers the Dark Souls formula you can create a decent game, but as we found with Deck13 Interactive’s Lords of the Fallen, it’s not enough to just take parts or put it together in a different setting, with no new ideas. All that serves is to give credence to the notion that Dark Souls is untouchable, a nod to a quality of its time that won’t be matched by anything that comes after. And whilst that notion is plainly absurd we’re in a place where hard games are constantly compared to Dark Souls and we have “X is the Dark Souls of Y” – the game is being put on a pedestal as a sacrosanct example of gaming. Which I get to an extent, I am a big fan of the series, but there’s clearly a way forward, a chance for progress, and that brings me back to Nioh.

I guess the reason why I was so upbeat about Nioh on numerous occasions whilst playing it, is that it didn’t just do the bare minimum to be classified as a Souls-like. It decided that it would take key gameplay structure from that series, like the constantly alive world, the reset of enemies when resting at Shrines (Nioh’s bonfires), the core combat style, and the reputable, “die and lose everything unless you can get back to where you died in one piece the next time” mechanic. So far, so basic, but the game doesn’t stop there. It was brave enough to throw in different dynamics within the game which actually make the game feel less like a traditional Dark Souls game.

Firstly, the decision to make loot drops random and plentiful rather than restricted and pre-defined completely changes up the equipment planning aspect of the game. Dark Souls chose to go for set pick up points for certain weapons and armour and even controlled “random” drops with drop-rates linked to certain enemy types. Whereas Nioh opts for a more Diablo-style approach where enemies drop random items and money like they’re going out of fashion. Meaning you lose the structure and arguably the ability to take advantage of building up your knowledge of set item locations in favour of having to manage your inventory based on having hundreds of different options for equipment, each with different abilities, the variety of which would make a JRPG blush. And with just that one change, Team Ninja have created a very different approach to equipment management which changes the way you plan and review your equipment. And this is all whilst maintaining similar attributes to Dark Souls such as equipment load affecting your movement, and needing certain stats to use certain equipment. It’s a great example of how to remain faithful but also throwing the rule-book out of the window. Other examples of changes include the use of a Living Weapon, a spiritual animal familiar which you can call upon when you’ve filled up the required gauge, which buffs your stats, adds an element to your weapon and makes you impervious to damage for a short while. This essentially gives you the option of a timely boost when you need it most, be it when surrounded by enemies or during a boss encounter. Another change is the introduction of titles which are acquired by completing mini achievements in the game, such as killing a certain type of monster. This earns you reputation, and after while you can exchange this for a prestige perk. A choice of four random perks is your reward, and whilst small in size, give you different things to aim for and add some variety. There’s even collectables in each area that give different types of boons depending on which of them you find. For me all of these are examples of giving you a little helping hand, and I know in some Souls circles such suggestions of support are sacrilege, but what’s worth remembering is none of these additions break the difficulty of the game or leave you over-powered, at least not for very long, and particularly with regards to the Living Weapon add an extra sense of planning and strategy for when best to use it.

In fact when you really think about it, Nioh has taken a lot of liberties in its choices to try to do things differently. It’s game is split up into missions, which have to be completed before another can be started, ignoring the huge open world of the original Dark Souls, or the limitless bonfire teleportation of the other instalments. It has a comprehensive blacksmith upgrading system that would make Andre of Astora jealous, weapons that improve, rather than degrade the more you use them, and Twilight versions of each mission that ramp up the difficulty for an extra challenge before you even contemplate NG+

But what made me really believe in Nioh as an example of what’s to come is how it tries to beat Dark Souls at its own game. And by that I mean all of the traps, the bait and switch, the blind corners, the things that Dark Souls veterans will have seen many times. My personal highlight is undoubtedly the anecdote I started with where I got royally duped by an unnoticed pressure plate because my focus was on the enemy instead. The game also likes to put enemies in your blind spots, be them melee attackers or long distance archers to catch you off-guard. And during cavernous levels it also has bats flying out of cave mouths at you to catch you off-balance and send you plummeting to your death. Sure initially some of these can feel cheap, but then you get used to the patterns, and listen out for the bat sounds, and suddenly you realise you’re tackling the challenge of the game in the same way as you would in the test and learn environment of Dark Souls, in a new and very positive way. Now of course not all of Nioh’s homages to Dark Souls work. It feels like it tries too hard to have shortcuts and interconnected level design, to the point that you don’t ever seem to have to progress very far in a level before either getting to a new shrine or unlocking a shortcut back to one, which can undermine the feeling of challenge a bit in certain levels. And its story whilst decent, doesn’t seem to have the heavy weight of foreboding or dread that the Dark Souls games manage to achieve. Also, the bosses, despite being varied, lack the stand-out nature of some of the Soul’s series most memorable encounters.

But, and this is the important bit, that doesn’t make it a failure. Nioh’s willingness to combine a core that is loved by many and weave in new concepts and ideas is something that should be celebrated. We know there are no more Souls games coming, and we can’t all just live in hope for a Bloodborne 2 to get our fix, and Team Ninja have shown us that we don’t have to. Their game is proof that a Souls-like can exist that lives up to the weighty name and feels like a Souls homage without being a carbon-copy. It stands on its own two feet as an example of how to move this sub-genre on. It was bold in its decision to break the Dark Souls mould and dare to be different in certain aspects of its design and execution. Importantly rather than being derided for being what Dark Souls isn’t, (or conversely not being what Dark Souls is) it should be celebrated for those differences, and hopefully lead the way for other developers to further enhance and tweak the formula to give us different but familiar Souls-like experiences for years to come.