PUBG for Xbox gets a new vehicle, new weapon for Miramar, performance improvements, and more in latest patch 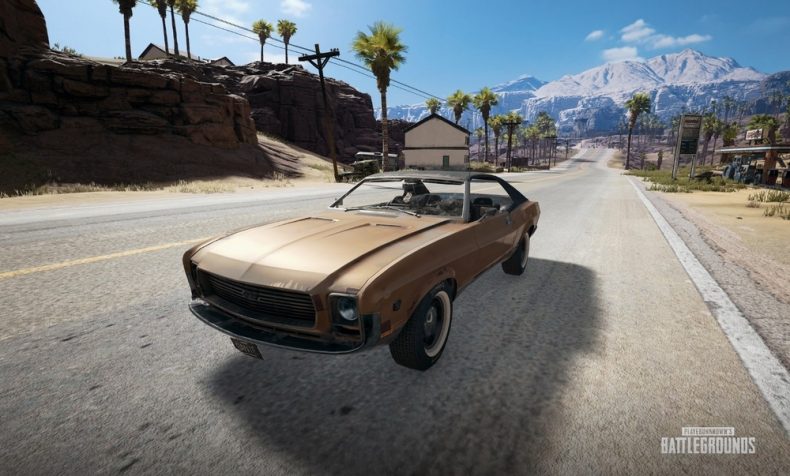 PUBG on Xbox Game Preview just got a big update adding a new vehicle, a new weapon, and more.

The 17th update was in the public test server before going live today with performance improvements and more. The patch notes are below:

OC and AS Server Merge

In an effort to improve matchmaking times, the OC and AS servers will merge to become OC/AS. The server will be located in Australia, so players in the OC region shouldn’t notice much of a change in performance.

We’re resetting the Leaderboard with the new patch! After the reset, the new Leaderboard will need to populate new statistics of at least 1,000 players, so it may appear to not have results for a short time. SMGs
Adjusted SMGs to be more effective in short range combat
Increased limb shots modifier
Slightly increased the damage of the Micro UZI, UMP9, and Vector
Decreased vertical recoil on all SMGs
Decreased recoil and scope sway when moving in ADS (aiming down sights)
Increased ADS transition speed
To make the Vector a little easier to find, we’ve increased its spawn rate at the expense of the spawn rate of the UMP-9 (overall SMG spawn rate remains the same).

ARs
Rebalanced ARs so none is the “objective” best—the power differential between each is now reduced, but each brings advantages to different situations.
Slightly decreased the damage of the M16A4, SCAR-L, AUG, and M416
Increased reload time by 30% for the SCAR-L, M16A4, and M416
Increased reload time by 10% for the AKM
Increased vertical and horizontal recoil for all ARs except the
AKM
Decreased recoil recovery rate for all ARs
Restricted big scopes (8x and 15x) for use with all ARs
Modified recoil animations for all ARs
First shot (including first shot after recoil resets) from the M16A4 now has less recoil.

Other guns
Slightly increased the damage of the DP28 and M249
Restricted big scopes (8x and 15x) for use with LMGs (DP28, M249)
Reduced crossbow reloading time from 4 seconds to 3.5 seconds
Weapon sway has been adjusted for all weapons (slightly increased side-to-side movement). And sway is now more pronounced when holding your breath.
Weapon sway when moving is now also reduced by the cheek pad attachment
Cheek pads now help you recover from weapon sway more quickly after moving

Level three helmets now only spawn in care packages (and one is guaranteed to be in every care package)
We’ve reduced the spawn rate for AR extended quickdraw magazines
Adrenaline syringes now spawn (rarely) alongside normal loot in the game world
Adjusted the casting time of Adrenaline syringe from eight seconds to six seconds
The tactical stock and cheek pad are now less effective at improving recoil recovery rate. It now improves ADS speed.
Gameplay

The SLR spawns alongside normal world loot. It’s a DMR which uses 7.62mm ammo and contains 10 bullets per magazine (20 bullets when extended.)
The SLR is more powerful than the SKS but has more recoil. Recoil control is the key to using the SLR effectively.
New Vehicle

The Mirado is a classic muscle car: a fast, four-seat sedan that’s limited to Miramar. It can be found around downtown areas and main city streets

Think of the Mirado as a compliment to the other unique vehicles on Miramar: The van is extremely sturdy, but slow and ineffective when taken off-road; The pickup is great for off-road travel; And the Mirado is the fastest way to blaze down a highway.

Improvements have been made to throwables (frag grenades, stun grenades, and molotovs).

Weight changes
Frag grenade: Increased from 12 to 18
Molotov cocktail: Decreased from 18 to 16
Smoke grenade: Decreased from 16 to 14
Stun grenade: Decreased from 14 to 12
Increased frag grenade damage and effective range
Frags previously had to be within 2.6m of player models to deal lethal damage. They now deal lethal damage within 3.5m, moderate damage from 3.5m through 8.5m, and low damage from 8.5m through 10m.
Stun grenades’ blinding effects have been improved
First, let’s explain some terms. “Direct effect” is defined as stun grenade explosions occurring within a 100˚ angle of the player’s visual field. “Indirect effect” occurs when stun grenades explode outside of that “direct effect” range and players are within 5.5m of the explosion
The maximum effective range of stun grenade has been increased to 20m
Depending on distance from the explosion, the direct effect can blind the player for a maximum of 5.5 seconds, and a minimum of one second (when 20m away).
Depending on distance from the explosion, the indirect effect can blind the player for a maximum of three seconds.
Characters blinded by a stun grenade now cover their faces. This is a new animation.
Spectators are now also blinded when spectating someone hit with a stun grenade
Stun grenades will now briefly blind and deafen the thrower if they explode behind their back when cooked.
You’ll now be unable to ADS while blinded.
Molotov cocktails now have new effects and their damage has been increased.
Molotovs can now deal indirect damage and burn damage (as damage over time), depending on whether or not you’re standing directly in the flames. If you’re in the flames you’ll take both types of damage.
Indirect damage (taken when standing in the flames) has been increased from 10 to 12.5 damage per second.
After catching fire, players will take burn damage as damage over time (10 damage per second) for a total of four seconds.
You’ll now be unable to ADS while taking burn damage.
Flames now spread further along wooden surfaces in houses
Flames from Molotovs spread further if another Molotov is thrown on top of the flames.
A new animation has been added for character models who are suffering burn damage. They’ll attempt to pat out the flames using their hands.
Character Movement

We’ve slightly decreased the movement speed when holding SRs, LMGs (M249, DP28) and shotguns. Your equipped weapon affects both your sprinting speed and your running (normal movement) speed.
We’ve removed the first shot delay when your character is not sprinting
Chambering a new round in certain weapons (M24, Kar98k, S1897, etc.) no longer limits you to walking speed while aiming down sights
The amount your camera shakes after being shot (“aim punch”) now depends on the amount of damage received.
Boat and Swimming Adjustments

Boats now sink when destroyed
We’ve made some adjustments to the way swimming works to reduce the effectiveness of hiding underwater.
We’ve decreased the maximum submersible time from 35 to 15 seconds
Once you’ve run out of air, you’ll now take 10 damage per second (up from four damage per second)
We’ve increased the delay for breath recovery time from one to four seconds. (In other words, when you lift your head up out of the water, it’ll now take four seconds before you begin to recover your breath)

On Erangel, all windows with bars have had the glass removed.
Added 26 graffiti images to buildings in Erangel and Miramar.
Added advertisement banners for PGI (PUBG Global Invitational) to buildings and billboards on Erangel and Miramar
The winning player or team will now be given approximately 8 seconds to celebrate their victory before the match ends and results are displayed.
Spectators can also watch the winning player or team ﻿celebrate﻿﻿
To improve visibility of the Blue Zone in the map, areas under the Blue Zone are now colored blue A marker has been added to the map that allows players to check the flight path of the plane.
The path is visible from when players are at the waiting lobby up until the point when they fall down to their final drop destination.
Added a UI message showing when healing items can’t be used.
Improved the in-game minimap
The mini map now dynamically zooms in or out depending on the character’s movement speed, enhancing your ability to see what’s around you.
You can now change the reticle style and color on the red-dot, holo-sight, and 2x scope using the scope zeroing keys (hold rb, then move L-stick while ADS: brightness, hold rb then press ↑/↓: reticle shape change, color change)