Three years on Rocket League is toxic, but brilliant 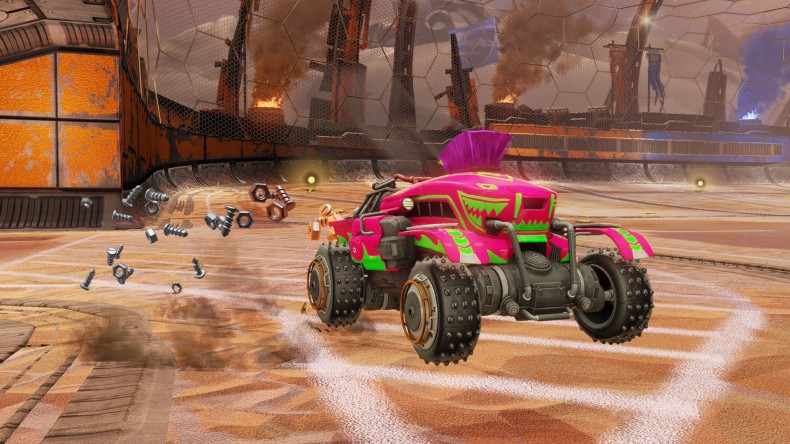 When it first launched on July 7 2015 I don’t think many people thought Rocket League would be as popular as it is today. Launching on PC and PS4, the follow up to Supersonic-Acrobatic-Rocket-Powered-Battle-Cars really took off with it’s take on automotive football, and now has a huge eSports following. The game has really progressed since its rather muted launch.

But what of my love of the game? I was enamoured when it came out, I wasn’t the best at it by any means, but I always worked hard and scored some decent goals, I sucked at aerials (hitting the ball while maintaining altitude) though. At the beginning I plugged a God is a Geek 1v1 tournament, did all the organising and when we did a test run with Adam and Colm overseeing events as commentators I got absolutely mullered by former contributor, friend of the site and all round good guy Ryan Sandrey. That one game still resonates with me today. That video is on the Internet, where I let in goal after goal and cannot find a response. Adam and Colm laugh it up in character but every time that explosion goes off I die a little inside. My confidence took a major knock and I barely touched the game after that, slowly but surely drifting away until it disappeared off the front page of my PS4 game list and I basically forgot it existed.

Fast forward to November last year and Panic Button brought the game to the console of the moment, Nintendo’s Switch and all those feelings came bubbling up again – while it’s not up to the standard of the PS4 version it’s an incredibly faithful port and well worth owning – but it wasn’t just the game’s presence on Switch that brought about my Rocket League reawakening, that came quite a bit later. It seemed my son Alex had found Rocket League on the Switch when I left the console at home one day and had taken to playing it when he could. My boy was practicing in training, playing online and getting better all the time, all the while I had absolutely no idea he was even playing it until I came home one day and found him on it. I did have to take the opportunity to remind him that it would look perform considerably better if he played it on PS4 instead, and it was that moment when he switched (lol) from one version to the other that my renaissance began.

Sitting down to play the game with him again was a great feeling; as a parent it’s great when your child takes an interest in a game that you like and as a result can play together. As I challenged him to a one on one I did not really know what laid in store for me, I lost four games to him, and only beat him twice, one of my losses was a massive 10-2 drubbing; the boy is only 8 years old! I realised if I wanted to play this game with him I was going to need to improve and quickly. Starting to play Rocket League again handily coincided with a series of events in the game where you earn an in-game currency for playing matches, this in turn allows you to buy accessories, crates or decryptors (items that open crates but remove the ability to trade the item gained). Not only that, but Rocket League Championship matches were being broadcast through the game itself via Twitch, if I wasn’t playing Rocket League at this point I was watching it instead. Now, if my son was playing Rocket League he would play 2v2 while I play 3v3, but if we sat down together I would join him in his preferred mode, and it’s helped us both massively.

I’ve learnt a lot from watching him play, basic boost jumps now lead to slightly more prolonged aerial touches and many times when I would misjudge my block on a shot I now connect, granted there are still times when I will dodge past a ball rather than into it to clear, but these instances are becoming much fewer. When we play together I tend to take up in defence while he goes on attack. Seriously he’s good, he’s scored 1,932 goals in 769 matches, that’s an average of 2.5 goals a game. While I seem to make a decent goalie, only letting us down through the odd high-ball misjudgement, or slightly poor positional choice (an easy thing to do in a fast paced game).

Here's me joining a game of Rocket League and making 4 saves in just over a minutehttps://t.co/1aG2nXxPVo pic.twitter.com/3o6WEKrXcr

It really helps that the Rocket League Championship Series was broadcast not long ago, which me and my son found ourselves watching together. Keeping up with the exploits of NRG ESports, Cloud 9 (featuring my son’s favourite player Squishy Muffinz) and eventual winners Dignitas (which confused my wife due to sharing the name of a suicide assistance group) was part of our weekend routine, a couple of ranked matches together followed by watching a few championship games before his bedtime was great. We enjoyed it immensely and with games continuing past his bedtime I would regularly keep him updated with events and watch the catch up streams with him the next day.

There were some amazing moments during the series, I mean it was quite something to see that pretty much every game is conducted in the air rather than on the ground, it takes all my effort just to make the odd aerial interception. Then there were the air dribbles which continue to blow my mind, before the entire thing culminated in the final game with Europe’s Team Dignitas taking a 3-2 lead with four seconds remaining before conceding an equaliser after a lengthy session of keepy-uppy by NRG ESports before JSTN finished it off, sending the championship through to extra time and a Turbopolsa winner after twenty-two seconds, it was crazy stuff and I witnessed it first hand. If there is one problem with this amazing game it’s the occasionally toxic behaviour of some of the players (Nic shows that R6: Siege seems to more rife with this sort of behaviour), you’ll frequently find players quit if a goal is conceded after a few seconds (easily possible before everyone is into the game’s rhythm), or the frequent trash talk repeat with slurs deliberately typed with spaces to avoid the game’s language filter. I’ve even found myself having to sidestep the question of what “cunt” means after someone typed it in chat. This is something Psyonix still needs to get to grips with because no amount of blocking or reporting is going to solve this. I mean, just see Twitter for example.

But, it’s been three years since Rocket League was released and it just goes from strength to strength. The game has a constant stream of new content to unlock and still feels fresh despite no gameplay changes being made. The players make up their own moves and they can create tutorials to teach you their techniques. This terrifically fun game shows no signs of slowing down, and Psyonix have gone on record stating that they have no plans for a sequel any time soon considering Rocket League is still so immensely popular, its burgeoning eSports scene is testament to that.

The thing is, if you played Rocket League back in 2015 and for some reason fell away from it now might be the time to go back and try again. I tend to flit from game to game, never settling, but after a painful hiatus, the game well and truly has its hooks into me again and I couldn’t be happier.