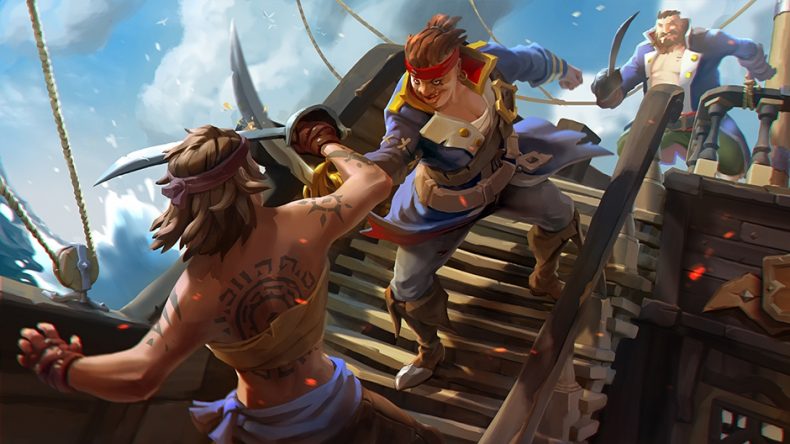 Video games are a fantastic escape, and many of us play them for different reasons. Ultimately, they help us escape to a different place and have fun along the way. Sometimes, we can encounter toxicity online, whether that’s in a game of Rainbow 6 or Rocket League, or reading through negativity on social media. It’s easy to see the bad in the gaming community, but that’s not why we’re here today.

We at God is a Geek think that games are a good thing, as well as the majority of players being lovely, decent people who just want to have a laugh and play some games. If not for our love of games we wouldn’t be here bringing you articles, videos, podcasts etc. You wouldn’t be here reading this right now if not for that.

To show our love of all things gaming we thought we’d share our most wholesome moments as an attempt to spread love and positivity, and show there’s some good peeps out there still. A recent moment for me came from the unusual place of Sea of Thieves.

SoT isn’t known for being the friendliest of places, obviously with it being full of pirates who are after that hard earned booty or keen to use your sloop for target practice. A moment of silence for my fallen chickens, pigs and snakes caught up in the fighting please. They’ll be sadly missed.

On one particular session, I was on my way back to cash in a few chests from a Gold Hoarder mission and noticed a sloop sailing in my direction. As with most players I thought this one would be like the rest and take me out in an attempt to steal my hard-earned loot.

After preparing for a fight I thought I’d try the peaceful approach in an attempt to keep a hold of my day’s earnings. As the ship was getting closer I tried to give them a wave in the hopes they’ll see me as friendly and refrain from greeting me with the usual cannonball to the face.

Luckily this player was on the same boat (yay for ship based puns) and decided to greet me by playing some music. For reasons I can’t remember I thought that dropping anchor seemed the safe thing to do and as I did so the player also stopped their ship and jumped aboard.

I was wary there was an additional player around ready to shoot me in the back, but that worry quickly disappeared as the player pulled out their accordion and started playing a wee tune. I decided the only thing to do was to join in, so I took out my Hurdy-Gurdy and we jammed together on the ship and the sun rose, trying to communicate through song as well as the limited chat options available to us.

After about 5 or 10 minutes of playing some music we bid farewell to each other and sailed off in separate directions.

In a game where the aim is to be as pirate as possible, which includes taking out other players and their ships, it was nice not worrying about ulterior motives and being able to have a nice time playing some piratey melodies. It’s been one my favourite random encounters. As I’ve written about before, my son has gotten pretty heavily into Rocket League; he’s pretty damn good and likes to regularly open crates when he earns himself money for keys by being a good boy. I came home one day to find all of his crates were gone, we’re talking over twenty of them, just vanished. I sat down and chatted with him and it turned out he had been trading them with online randos expecting them to give him something nice in return, which they didn’t. I was heartbroken for him to have had his trust broken like that. Anyway, I went on Twitter to vent about how people could so callously take advantage of a little boy when a follower said he’d be happy to give my son some of his crates. So, that night I went on his account, made a party with this person and they just gave him thirty or so crates out of the goodness of their heart.

There are some rotten people in Rocket League, but it’s so nice when someone can do some good like that for another person. It really warms my heart. I’ve been playing a lot of Forza Horizon 4 lately, to the surprise of nobody, and already I’ve enjoyed some nice moments within the game. With its shared world, you’re always driving past other players and I’ll often beep at them in acknowledgement. They don’t often beep back, but it’s just my way of being a little social without actually being too social, because I’m such an awkward idiot.

Imagine my surprise then, when I was parked up waiting for a Forzathon Live event to begin, alongside half a dozen other players, and I managed to set off a chain of car horns! I’m a Halo fan, so naturally I equipped the Halo Theme horn as soon as I was fortunate enough to win it in a wheelspin, and just decided to play it to break the silence as everyone simply sat waiting for several minutes. Soon enough, there were themed horns blaring and people started doing donuts I couldn’t help but smile at what I had started. Forza Horizon 4 is a wonderful game anyway, but this was a moment that made it that little bit more special.

I also used to play a tonne of Destiny on PS4, especially pre-The Taken King, and have a specific memory from when the beta was running shortly before release. I was at the maximum level the beta would allow (I think it was about level 8 or something like that, but it’s not important) and was just enjoying wandering around Earth in Patrol, battling squads of Fallen enemies and searching for chests. I was so intrigued by the world that I just wanted to spend time in it, and sometimes I liked to help out fellow players (something that I continued to do throughout the full game, when I saw them in the middle of a tough-looking fight).

I was in the plane graveyard and had just destroyed the group of Fallen that spawn near the tunnel, on the high point at the back of the area. I turned back to look at the view of the planes and noticed a player in the distance, they were struggling against a rather large bunch of Fallen, but luckily I had my sniper rifle with me. I brought up the scope, took a deep breath and began loosing rounds in the direction of my fellow guardian’s enemies. I dropped a few, then watched as the other player began taking out the others as the tide of battle turned. I offered a bow from my sniper spot when the fight was won, then went on my merry way.

I’m not great at shooters, and I’ve never been especially great at Destiny, but that’s why I enjoyed that moment. I felt useful, despite never knowing if that player appreciated my help or not.

There’s a lot of criticism you could lay at Destiny’s door. Whether that be Bungie’s money-grabbing exploits, including locking content out for players. Or even the fact that it’s an absolute grind-fest to reach the higher levels. One thing you can’t criticise though, in my eyes, is the community of players that the game attracts. Online gaming often gets derided for its toxicity, but my experience with fellow Destiny players has always remained respectful, cooperative and fun. I vividly remember when I first embarked on the game’s infamous Raid – a special type of cooperative mission that requires high-level experience, gear, lashings of cooperation and trial and error. I partied up with a couple of friends I knew from online forums but to make the numbers up to the required six, meant I was also teamed up with players I’d never spoken to before. So not only had I no clue what I was doing, my inexperience would be laid bare for all these strangers to see too.

It’s an experience that should have been daunting, not only due to its relative difficulty but also socially challenging as I tried to not make myself look like a complete noob. But to my pleasant surprise, the reality couldn’t have been further from the truth. With every mistake I made, there were strangers and friends to help me through, guide me past my mistakes, and offer tips they had garnered through their experience. But this was more special because during Raids everyone needs to have specific roles in order to succeed. If you don’t do you job well, the team suffers, and with that comes pressure, especially on my inexperienced shoulders. My fellow players dealt with this in the best possible way. With a mixture of focused direction and empathy, I knew I was important and doing my part, but the pressure wasn’t too high to make me fearful of failure.

It meant those evenings on Raids were some of the most rewarding online experiences I have ever had, because I took part, I learned, and I enjoyed being part of a team that was always working towards a common goal. Throw in a good dollop of banter and laughs, and those nights just flew by, and when we got to the end and succeeded it was all the sweeter thanks to the journey I’d had to get there. These are just a few examples that some of us here at God is a Geek wanted to share with you lovely people.

Remember though that for every toxic player you come across you can rest assured that there are at least 100 players ready to help you out that’ll make some memories like the ones you’ve just read.

Help us spread the love and let us know what your most treasured memories are, the ones that have a special place reserved in the ol’ gaming memory box.

Video games are cool. Don't let anybody tell you any different.
MORE LIKE THIS
DestinyDestiny 2Rocket LeagueSea of Thieves