previous
ESports Review: Everything You Need to Know
random
next
Watch the brand new trailer for Yooka-Laylee and the Impossible Lair
0 comments 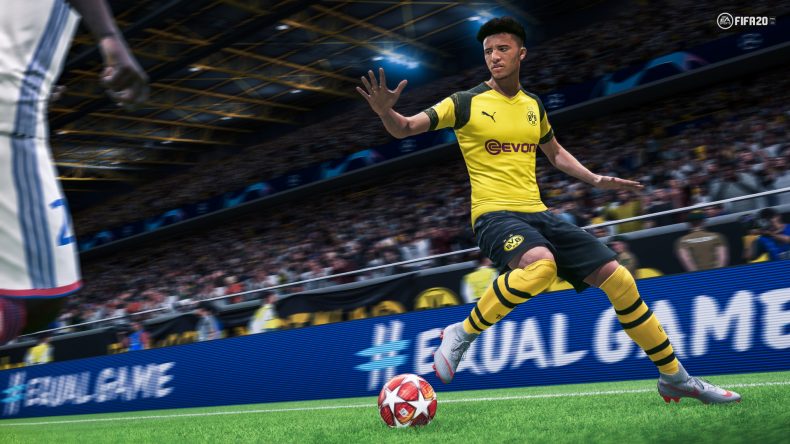 It’s easy to get frustrated with FIFA, and even when you tell yourself that you won’t get annoyed at all you find yourself watching replays of goals you conceded and blaming the AI. Or at least that’s what happened in my first game against another human in FIFA 20. As he was attacking down the wing my defender initially decided to track a run at the back post, then decided to run towards the ball and then tried to go back to tracking the run, but it was too late, the ball was played across the box and ended in the back of the net, with my indecisive defender nowhere near the scorer. The replay was telling, the defender seemed to change his mind at random, and that hesitation gave the attacker the space needed.

You know the kind of thing I’m talking about: players changing direction multiple times before committing to something; players ignoring the most obvious runs, and players just running out of position every chance they get can seem like things that pop up every game, when in reality it’s much rarer than that.

But this time it really hurt, as just hours before, Sam Rivera (Lead Gameplay Producer on FIFA 20) had shown an example of how the AI is improved compared to FIFA 19 to stop things like this from happening. Admittedly it was the only time I noticed this across multiple hours of play, and in FIFA 19 it probably would have happened more, but it still stung that the AI being super indecisive cost me a win (the match ended 1-0).

“What I can tell you is that it is much improved in FIFA 20”, says Rivera when I tell him about my crushing loss. “Obviously it’s a video game, it’s a calculation that it is making that is not necessarily going to be one hundred percent like a human, but it’s getting closer. So you may still see movement that maybe is not 100% realistic once in a while. But it was a big focus for us to make sure that the game, when you compare FIFA 20 side-by-side to real life, FIFA 20 just looks much more like football in general. So what you will also see is that they stick to their formation positions a bit more, and that altogether just looks like that player; he’s where he’s supposed to be. And maybe once in a while he will change his mind where he’s going without the need for it. But it is going to be in a much more controlled way now. Basically, we have more control over what the players do every single fraction of a second, we try to keep it more composed, more realistic.”

It’s almost ironic that the biggest tech issue I noticed with FIFA 20 was to do with AI defending, which has been strong for the past year or so. In fact, some players have even taken to just letting the AI do most of the defending for them, it was that good in some situations. But now that idea seems to be up for question. No longer will the AI dive in for a perfect tackle, or push opponents into a crowd of your team. Instead they basically feel like they just stand in the way, waiting for someone to jump past them. This isn’t a bad thing, it forces you to (mostly) play as the defender who is going to challenge for the ball, and requires you to actually be a defender. Otherwise it will just be too easy for the other team.

“When somebody has the ball, what you will see is that the AI doesn’t get as close as before, it stays further away”, says Rivera. “So that’s the intention, away from the ball remains quite similar in terms of marking, but playing the ball, you get less support from the AI. The other thing, though, is if you if you don’t switch to the player that is close to the ball, then it is much easier to dribble by the AI defender, so basically in a one on one between AI and the dribbler, the AI is not really going to do much”.

The result of this, and some other changes such as strafe dribbling (which allows you to slow down the pace of your dribble but have greater control of the ball) makes it feel like beating your man is easier than ever. With greater control over the weight of your touch, you can go from tapping the ball inches from your feet to easily knocking it five yards past a defender who lunged in erratically. Chaining skill moves one after the other may not be possible anymore, at least most of the time, but it now feels like you can beat most players without them.

The negative side of this is that things once again feel pretty slow. Being able to slow down the pace of your dribble obviously takes the speed out of the game, but even generally FIFA 20 feels a little slower at times, especially when it comes to counter attacking. When you would want your wingers to be sprinting down the pitch making runs while your striker holds the ball up around the halfway line, they simply refuse and only go a couple of yards ahead of you. This basically means you have to beat your man to advance the ball, or hang around long enough for a player to finally make that darting run forward.

It is obviously pretty difficult to get a feel for what will be a strong tactic and what will be underwhelming with just a few hours of play, Rivera even mentioned that the pro players at the same event who played for slightly longer didn’t manage to find anything too overpowered, but this reduced counterattacking pace did make it seem like playing down the wings would be a little weak. Considering that for the pros last year one of the best tactics was to hit an El Tornado skill move, then cross the ball to the back stick for Ronaldo to head in with ease, this might not be a bad thing, but it seems that other nerfs to that particular strategy would have done the trick.

“We realised that when the ball is in the air, so after the tornado, after a flick, and you kick it, there’s not enough error in your kick”, says Rivera. “So in real life, you could go to the wing; flick the ball then cross it, but you just don’t do that because it’s just easier to get it down on the ground – there’s less error kicking from the ground. So we needed to add error to kicks, to shots, or crosses that happen when the ball is in the air. So that’s what we’re doing, because the option should be there for you to do it, but it should have a more of a more realistic outcome.”

The key takeaway from my time with FIFA 20 was that, perhaps more so than other years, 11v11 feels very similar to the last year. There doesn’t yet feel like a killer obvious feature that really makes the moment-to-moment action significantly different. If you liked FIFA 19 and just wished some instant-win strats were nerfed than you’ll like this, if you didn’t like FIFA 19 then there’s not that much here that will make you change your mind. When the biggest overhaul to a system is free kicks and penalties, things that at most crop up a couple of times per game, you get the feeling that, for the 11v11 experience at least, not much has changed.

For what it’s worth the new penalty system is a massive improvement over the previous one. The new UI for aiming your kick removes the feeling of being cheated by a system you couldn’t see easily, and removes some of the random feeling, but the button press timing and error markers make sure that it’s still easy to mess up. As far as penalties go this is the best they have ever felt in FIFA. The free kick system is going to take some time to figure out: every one of my attempts either had too much or too little spin, and none went in, but from the few attempts I had it certainly feels more complex than before. Whether it will be now worth shooting more times than playing it short and keeping position will remain to be seen, but it certainly feels like the kind of system you could master with enough practise.

FIFA 20 seems a little slow for my liking, and my go to strategy of counter attacking and having a big man hold the ball up for wingers to sprint ahead seems to be just about dead, but like every FIFA it’s still great fun to pay. The changes to the background systems that you may not notice too much seem to have lowered the amount of irritating moments, such as an improved tackling decision-making-system which reduces the amount of tackles where the ball just bounces straight back to your opponents – which is a god send – and when you do score a banger it still feels amazing, a feeling FIFA has really mastered over the years. FIFA 20 will be great, at this point it would probably be harder for EA to make it boring to play, but it does feel like the main focus this year has shifted away from big changes on the 11v11 pitch, and into other areas, which I’ll have more to say about on this very site, pretty soon.

Hands-on impressions based on a press trip. EA paid accommodation and transport.

eSports! I joined God is a Geek all the way back in September 2013 and since then have spent most of my time on Dota 2, and occasionally posting the odd review, news article or totally wrong predictions for The International. When I am not playing Dota I can probably be seen watching some kind of strange eSport or begging for more Twitter followers (@MikeStubbsy if you are interested). Aside from GiaG I am a computing student, football coach and major Apple fanboy.
MORE LIKE THIS
EAea sportsFIFAFIFA 20