FIFA 20’s Ultimate Team has loads of new customisation, and people are going to be angry 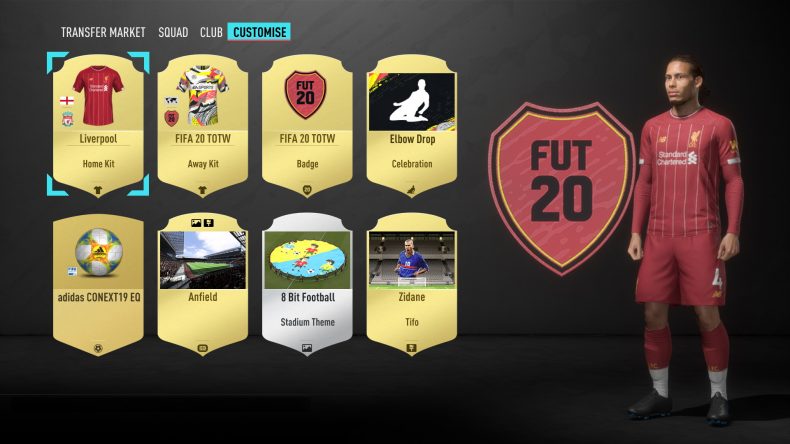 A lot of people are probably typing some very angry comments about the just revealed changed to FIFA Ultimate Team coming with FIFA 20. On the surface the changes are pretty minor: some new cosmetic items; a Fortnite style battle pass to unlock new toys; a few new game modes to play, and year long challenges, but you can be sure that despite the fact that all the new additions are basically option extras and the core of FUT remains exactly the same, people will be very upset.

But why would they be upset with that? I hear you ask. Well dear reader, FUT 20 allows you to position a giant (quite literally 50 feet high) dabbing unicorn behind your goal. Some people aren’t gonna like that.

This comes from the new customisation options that really allow you to make your club feel different. No longer will every opponent feel exactly the same; the only variance because of the kit they use, now you can have one of a wide variety of unique logos (including the unicorn) and can see them positioned around the stadium, including having them printed on the netting between the crowd and the pitch, resulting in a giant dabbing Unicorn taunting you as you try and score. If you do want to keep things simple as they have been ever since FUT started then you can continue to use real world badges and make it look exactly like whatever team you want, but the fact that you will have to compete against players with a dabbing unicorn taunting you is going to make a lot of people unreasonably mad.

Of course the unicorn is an extreme, and I expect that there won’t be many more outlandish options, but even the less crazy options will still be fun to see. You can have a gigantic version of Steven Gerrard behind your goal if you want, although in the definitely-not-final-build I played his head was cut off in every camera shot because he was so large (that will be fixed for launch I’m told). And while I didn’t get to see too many options the extra in stadium customisation is certainly a good idea. It gives people way more customisation options, will give you more things to work towards unlocking, and will surely make some people very angry indeed, which will be hilarious: it’s a win-win scenario.

Outside of these extra cosmetics there are a few other additions that will further extend the FUT experience for the more hardcore players. There’s a new set of season challenges, with each season lasting a few weeks, and something that is basically the battle pass from Fortnite, where you level up with XP and unlock new cosmetics and probably get a few loan players for every level. For those who play FUT religiously this adds another level of progression, which will surely be welcome, but it’s difficult to see the more casual players really getting involved with having to grind 30 levels to unlock the top reward. The casual players will most likely find more fun in the new game modes, similar to the ones added to kick off last year, which are all present in FUT now. There’s also new additions such as a King of the Hill mode where keeping the ball in a specified area of the pitch will increase your multiplier and then if you score with a multiplier active you get more goals. So if you get up to a multiplier of three in a zone and then go and score you will get three goals instead of one. I didn’t get to play that mode, so can’t give a verdict, but the chances of this being something other than “play once and forget about it” seems pretty unlikely.

FUT is once again struggling to iterate because the base of the mode is pretty much as perfect as it can be. Any major changes to the way it works would probably make it worse, so more customisation options and unlockables is the only way to go for now. It may be seen as underwhelming in some quarters, and some probably won’t like it at all as it takes away from the “realism” in a game where you can literally create fantasy football lineups and play with them, but FUT 20 was never going to feature groundbreaking changes, and this seems like a good way of keeping it fresh.

Impressions based on press preview trip. Hotel and flight paid for by publisher

eSports! I joined God is a Geek all the way back in September 2013 and since then have spent most of my time on Dota 2, and occasionally posting the odd review, news article or totally wrong predictions for The International. When I am not playing Dota I can probably be seen watching some kind of strange eSport or begging for more Twitter followers (@MikeStubbsy if you are interested). Aside from GiaG I am a computing student, football coach and major Apple fanboy.
MORE LIKE THIS
ea sportsFIFAFIFA 20FUT