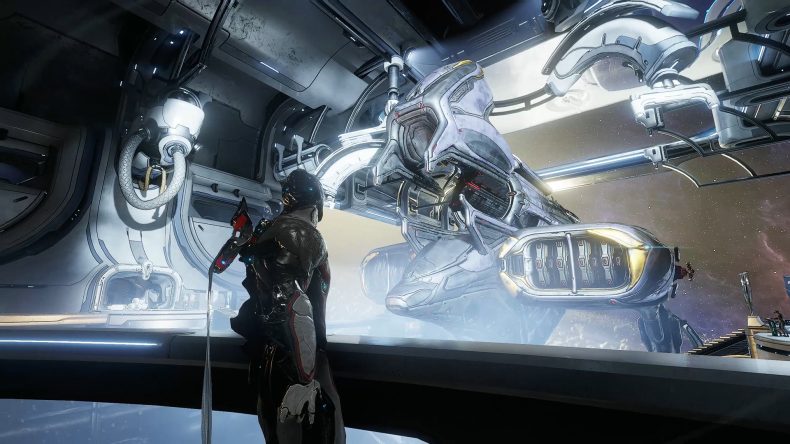 Fresh from TennoCon 2019, Digital Extremes debuted a 30-minute demo of new expansion Empyrean, alongside a new cinematic intro movie directed by Hollywood director Dan Trachtenberg (known for the excellent 10 Cloverfield Lane and being the latest director in charge of the upcoming Uncharted movie).

Meanwhile, the next big thing in Warframe is Empyrean. While it has no release date as of yet, Digital Extremes was keen to show off a lengthy demo at the fourth annual Warframe conference, TennoCon. Empyrean hands players control of the Railjack battleship and introduces space combat and exploration, which will include new territory in the Origin System.

The Railjack comes with an in-ship control system that doesn’t just allow movement and combat, it’s a fully functioning battleship with controls for shield deployment and missile volleys, alongside the ability to send out Archwings and infiltrate enemy ships. Player ships can be customised and upgraded, too. Digital Extremes provided a raft of new Empyrean information too:

Have a look at the massive Empyrean demo here:

A third open world was also teased during TennoCon, with the Duviri Paradox update reveal. This new world will see a new, surreal environment where Operators have grown into fully mature adults.

Finally, Warframe’s latest seasonal content, Nightwave Season 2 and Wukong Prime was announced to be available right now across all platforms. Here’s the official blurb, straight from the horse’s mouth. Well, from Digital Extremes’ PR, at the very least:

One thing’s for sure: Warframe players have got a lot to look forward to! Our very own Mick Fraser is probably wetting himself right now. Hell, maybe it’s time I finally returned to the game, too…