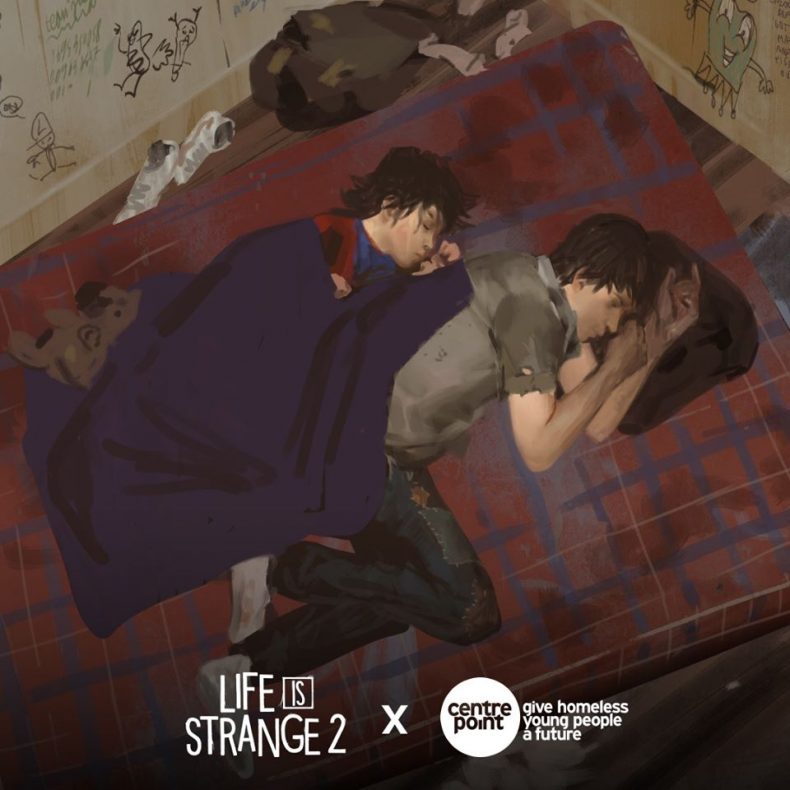 Centrepoint are the UK’s leading youth homeless charity, believing that “every young person should be supported to have a home and a job regardless of their background or start in life.” The charity runs a free phone, email and online chat service for young people aged 16-25 who are homeless or worried about being on the verge of homelessness. With  a 165% rise in rough sleeping since 2010, Centrepoint are needed now more than ever.

“Life is Strange as a series has provided players with a glimpse into slices of life they may have never even considered, and has provided awareness of a great number of issues faced by young people in our society, creating some truly inspirational conversation among players. In Life is Strange 2, the Diaz brothers are cast out on their own, dealing with issues many homeless young people face on a daily basis. We know that Life is Strange fans are passionate about the themes they encounter in the game, and so by partnering with great organizations like Centrepoint, we hope to provide a way for them to get involved with helping share the message that there are places young people can turn in times of hardship.” “When Square Enix approached us, and introduced us to Life is Strange 2, we were incredibly impressed by the game’s portrayal of homelessness among young people. Sean and Daniel find themselves made homeless at the beginning of the game. And though throughout the story they find places to stay, however, that doesn’t necessarily mean they have a home.

Being homeless means not having a safe place to call home. We know thousands of young people sleep rough every night, but there are thousands more sleeping on sofas, floors, night buses or with strangers – these are the “hidden homeless”. And it’s far more prevalent than people think – in fact 73% of young people we recently surveyed said they had sofa surfed as they had nowhere else to stay and 27 per cent spent a night in a tent.

Homelessness can be devastating for a young person’s mental health, the majority of young people who come to us have experienced negative mental health and feelings of loneliness.

We hope that if you’ve played this game, and been affected by the situations Sean and Daniel find themselves in, you can reach out to us by calling our Helpline on 0808 800 0661 or contacting us online via the Centrepoint website.

I believe the game will encourage people to look into how young people are living these scenarios in reality, and that there are things that can be done to support them.”

As part of the partnership, Square Enix’s Life is Strange channels will continue to promote Centrepoint’s ongoing campaigns, including an awareness livestream.