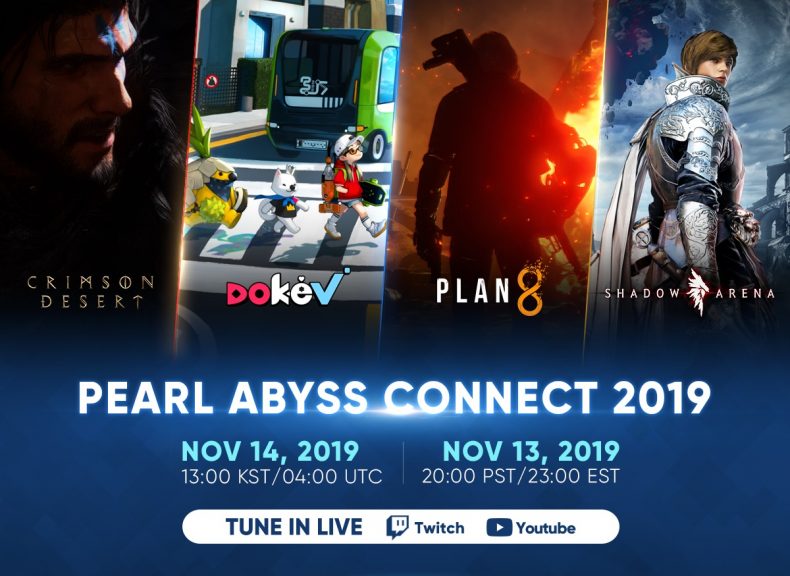 Pearl Abyss have announced that three new games are due to be released ahead of their Pearl Abyss Connect.

Plan 8, Crimson Dessert and DokeV are currently in development with more details, as well as trailers, being announced at the Connect event.

The Pearl Abyss Connect will be taking place on November 14 in Busan, South Korea. The Connect event is due to start at 4:00am GMT / 5:00am CET and will be streamed via Twitch and YouTube.

Until then we have a little bit of information on each of these three new games:

Plan 8 is classed as an exosuit MMO Shooter. Joining the team as Technical Advisor is Minh Le, known as being co-creator of the Counter-Strike series. Production is being led by Seung-ki Lee, formerly the Environment Art Director of Black Desert Online and Black Desert Mobile.

Last of the three is Crimson Desert, an open-world fantasy MMORPG. The gist of Crimson Desert is three tribes being in an open war, fighting for control of the Pywell continent. Jason Jung, formerly the Game Design Director of RYL Online, is producing Crimson Desert. Joining Jason Jung is Dae-il Kim, founder of Pearl Abyss. The action combat system is in the hands of Eter Lee, former Lead Combat Designer for RYL Online and C9.

In addition to these new games announcements, Pearl Abyss will also be running a Closed Beta Test for Shadow Arena. Shadow Arena is a new fantasy arena fighter and a trailer will be arriving soon. Shadow Arena is also being produced by Kwang Sam Kim, lead producer of Black Desert for consoles.

If fantasy arena fighting games has your interest piqued there’ll be hands-on gameplay available at G-Star 2019.