“The dolphins will forever have a place in my heart”: Interview with Jill Johnson, Associate Producer on The Sims 4: Island Living 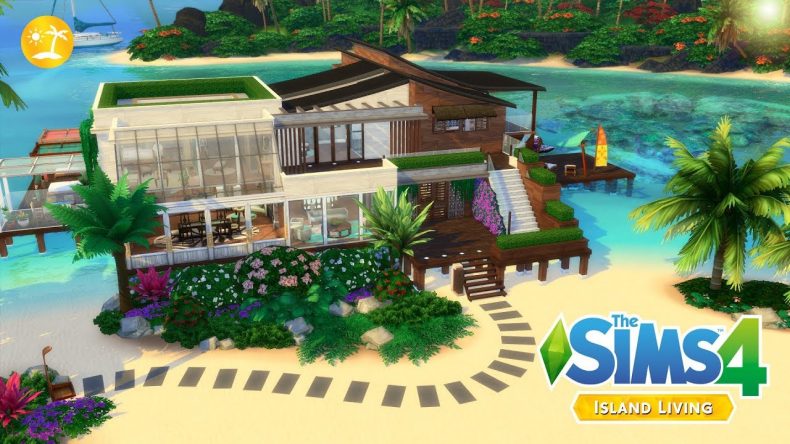 Since its release five whole years ago, The Sims 4 has remained incredibly popular for both PC and console gamers alike. Earlier this year, we saw the release of the latest expansion, Island Living, which features a tropical island getaway complete with beach barbecues, umbrella drinks, and the usual Sims social shenanigans.

We got to chat a little bit to Jill Johnson, Associate Producer at Maxim, about why The Sims is still such an enduringly popular brand, what it’s like to work on it, and the challenges faced by her and her team. Island Living introduces a host of new features, interactions, furniture, gadgets and – interestingly – animals, to the Sims 4, some of which Johnson is incredibly proud of.

“The Dolphins will forever have a special place in my heart,” she explains. “Just having them as a feature in the game added a few extra warm fuzzies to most of our days at work. The idea of having dolphins in the game came about really early, almost as soon as we settled on a tropical theme. It just felt like such a natural part of the ‘island life’ fantasy that we wanted to live out. I don’t think any of us quite expected being able to play, talk and pet the dolphins in those early days of development. Just being able to see one in the world was exciting.” Being able to achieve something of a career dream sounds incredible, but according to Johnson it was hard to believe the dream was coming true. “As we were having our tech checks and design reviews, in the back of my mind I was secretly thinking ‘Is this really happening? Did someone just say we’re making an animation for the dolphin to spit in your face?’ So dreamy. When all was said and done, that whole package of what the different disciplines did for the dolphin still just blows me away. The model is adorable, the animations are endearing, and the voice is possibly my favourite audio of my entire career in The Sims.”

Of course, working on something as intricate and popular as The Sims can’t be all sunshine and rainbows, and at times it produced its own challenges. “Working on Island Living was like the butterfly effect of game development,” Johnson admits. “The features were all so closely intertwined and reliant on each other, it was nuts! It seemed like every work-in-progress feature had an impact on every other work-in-progress feature and the slightest change in anything would have a cascading ripple effect.”

Indeed, the amount of extra calculations to consider sounds staggering. “In order to approximate the sizes of our neighborhoods, we first needed to sort out what was a comfortable wading distance and how deep or shallow an incline our animations could support for humans of all ages.” But not just humans, right? I mean, this is The Sims after all. “And mermaids,” Johnson clarifies. “Dogs too if you have The Sims 4 Cats and Dogs Expansion Pack. And small dogs. We needed to define how big our boats were going to be early on to make sure they had enough room to turn.” If anything, it forced the team to come at the development of Island Living from a different angle. Says Johnson: “It’s almost like we needed to work backwards to make sure all the pieces were working together. In addition to that, we had to sort out how to support water lots, a brand new lot type and how they interplayed with Sims; new stilt foundations, boats, docking points – and don’t forget to make sure there’s a spot for the toddlers to splash! On top of that, we had the Island Event and Conservation layers to balance. I’m in absolute awe at how impressively our team collaborated to pull all these pieces together. This was definitely one for the books!”

It’s also worth considering that this was a very different concept to previous expansions in many ways. The team had to think about things they’d really never dealt with before. “Island Living has more outdoor gameplay than I’ve ever seen compared to other expansion packs within the The Sims 4,” says Johnson. “Swimming in the ocean, in itself, complete with boating and dolphins is a huge addition of activities you can do outside of your home. In addition to that, we added sunbathing and beachcombing, Island Events, Conservation, the island Waterfall, and cool new ways to fish that all wrap up in a luscious backdrop to enjoy. Who would ever want to go inside?”

Unsurprisingly, Johnson’s team took a good deal of inspiration from the fans. Community feedback is becoming more and more important during game development, with social media giving the fans a much larger podium than ever before. “Probably the main area that was reinforced by Community sentiment was the ability to take up residence on the Island,” she confirms. “There were some natural inclinations toward making this a destination world, but we’d heard enough feedback from our players that they wanted to live on a tropical island to confidently sway our decision to a residential world type. We also heard plenty of comments around players wanting Mermaids, and to that we said ‘Yes please, you got it!’” “The Marine Biologist branch of the Conservationist Career was also inspired by community feedback,” Johnson explains. “Last but not least, our Off The Grid Lot Trait was motivated by the community challenges our players were doing similar to the Rags to Riches Challenge, as an example. One goal for this lot trait was to give that type of challenging gameplay an easier starting point than having to enter a bunch of cheats or use a spreadsheet.”

Johnson also tells us how one of EA’s in-house employee initiatives helped shape Island Living during development. “There was a mystical alignment of the stars while we were working on Island Living. Coincidentally, unrelated to the Sims, EA spun up a new Employee Resource Group called Aspire, right as we were solidifying our feature list. Aspire is a group of EA employees representing Asian and Pacific Islanders,” she clarifies, “that helps in lending advice to game development teams while a project is still in development. We had a review and brainstorm with them to make sure we were accurately portraying Pacific Islander culture and people. Their advice helped us refine our presentation of our Child of the Island Personality Trait quite a bit.”

Some of this advice proved utterly invaluable, even translating to features in the game. “The Masarap Ang Spoon and Fork wall decoration in the buy catalogue is a direct result of feedback from the Aspire group,” says Johnson. “The timing was perfect and I’m so happy they were here to collaborate with us! They had some wonderful notes and insight for our team that definitely drove some shifts and new content we hadn’t thought about before.” Being a part of the team that created The Sims 4’s biggest and most ambitious expansion to date obviously left Johnson with some fond memories, but there was one element of production she was particularly fond of: “The puns!” she says. “It’s fascinating how many beach and ocean references naturally came up in just in normal conversation. Throughout the course of making this pack, we devolved into a bunch of joking dorks. From day one, it was really hard to avoid having any serious tech conversations that didn’t involve ‘diving in’ or ‘being in the same boat’. Some people were a little crabby about all the dorky puns at first, but eventually they too started to dip their toes in. Not that I’m fishing for compliments or anything, but eventually a handful of our team also took the plunge and we started punning it up on porpoise. The brilliance was washing over us. Eventually we just couldn’t kelp it.”

I thought we were bad here, but Jill Johnson really put us in our plaice.

If you’re a fan of The Sims 4, be sure to check out the Island Living expansion, available now on PC, Xbox One X and PlayStation 4.

Senior Content Editor Mick has been playing games for over 30 years and writing about them for around 12. After drifting from site to site for a while, settling briefly at the now-defunct Made2Game and freelancing for the gone-but-not-forgotten NintendoGamer Magazine, he came at last to rest at Godisageek. Mick has been a reviewer, staff writer and content editor here for some time, while also moonlighting a little for Red Bull Games. He has 4 kids, has written 2 novels, and sometimes even manages to pay a bill or two. You'll usually find him defending the galaxy in Destiny 2, battling evil in Diablo 3, or lurking in the background on Twitter. Find him there @Jedi_Beats_Tank, or on XBL (JediWaster247), PSN (Jedi_Waster) or Nintendo (JediWaster).
MORE LIKE THIS
EAMaxisThe SimsThe Sims 4