Game of the Year 2019: A Plague Tale: Innocence 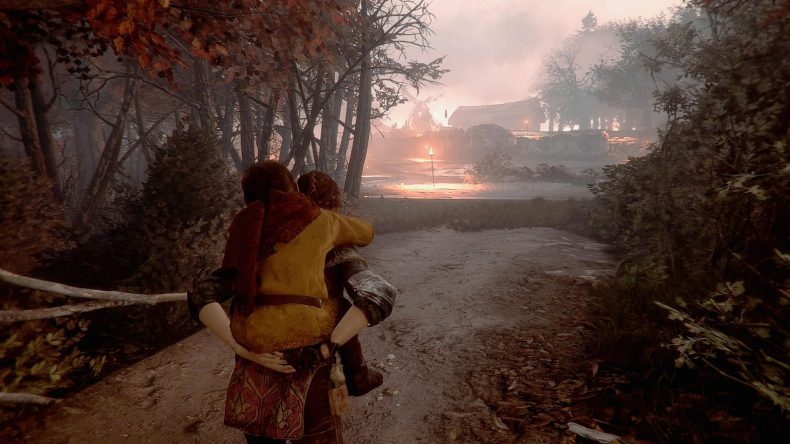 The tale of Amicia de Rune and her struggle to keep her little brother Hugo safe amidst the horrors of France during The Hundred Years’ War has a straightforward enough premise, but within the very first hour it becomes apparent that A Plague Tale: Innocence is far more than it appears.

Hugo is sick, you see, and it’s his illness and its bizarre side effects that have led the dreaded Inquistion to come looking for him. With their parents slain and their world in tatters, the de Rune children flee their family home into the noxious wilderness. Amicia is no fighter, and armed only with her trusty slingshot and a variety of ammuniation types that she must either craft or find, she often has to rely on her wits to survive. At various intervals this involves the use of light and shadow, fire and fear, to control the swarms of plague rats ravaging the countryside. But this is only a small part of it. Yes, it’s tense to creep past armed soldiers or pick your way through swirling, churning lakes of rats, but the real triumph of A Plague Tale: Innocence is the character development of Amicia and Hugo. The former in particular goes from a selfish, precocious rich girl to a mature young woman who will do anything to protect her family, while the latter learns to not only harness the strange power within himself, but to brave the terrors of the world alone when he has to.

And the supporting cast is just as strong; all children or at the most young adults, thrown into a terrible situation together with no choice but to make the best of it, and rely on each other to survive. There are some truly touching moments in the story, a handful of real surprises and one heroic death that feels not only painful but truly earned by the character. Even the primary villain hunting the de Runes – initially a two-dimensional bogeyman – is shown to have real beliefs and faith that what he is doing is the right thing to do, no matter the cost.

Ultimately though, what A Plague Tale: Innocence really shows us is what happens when a studio is truly passionate about a project and is left to make the game they want to make. There are no micrortransactions or store fronts to be seen (and this is 2019, for goodness’ sake), no forced or tacked-on multiplayer, no clumsy RPG mechanics shoehorned in. It’s a story-driven survival game that puts its characters and world front and centre and succeeds simply by being incredibly playable.

There’s an almost incongruous charm to it, an undeniable beauty in the macabre locales, from corpse-strewn battlefields to dingy prison cells, and when the game brightens up and pours autumnal sunshine onto the glittering waters of a lake or sprinkles drops of dappled gold through a forest canopy, the engine dazzles. But of all the praise heaped upon it, what impresses most about A Plague Tale: Innocence is that no one saw it coming. Understated and under-hyped, it slipped quietly through our defences as surely and as swiftly as a de Rune, and left an indelible mark on 2019. We’re not sure the franchise is ripe for a sequel, but one thing is certain: this won’t be the last thing we see from Asobo Studios, and there’s no chance they’ll ever be able to release a game so stealthily again.

A Plague Tale: Innocence is a magnificent achievement, and one that we are proud to crown as God is a Geek’s 2019 Game of the Year.

Senior Content Editor Mick has been playing games for over 30 years and writing about them for around 12. After drifting from site to site for a while, settling briefly at the now-defunct Made2Game and freelancing for the gone-but-not-forgotten NintendoGamer Magazine, he came at last to rest at Godisageek. Mick has been a reviewer, staff writer and content editor here for some time, while also moonlighting a little for Red Bull Games. He has 4 kids, has written 2 novels, and sometimes even manages to pay a bill or two. You'll usually find him defending the galaxy in Destiny 2, battling evil in Diablo 3, or lurking in the background on Twitter. Find him there @Jedi_Beats_Tank, or on XBL (JediWaster247), PSN (Jedi_Waster) or Nintendo (JediWaster).
MORE LIKE THIS
a plague tale: innocenceAsobo InteractiveFocus Home InteractiveGOTY 2019