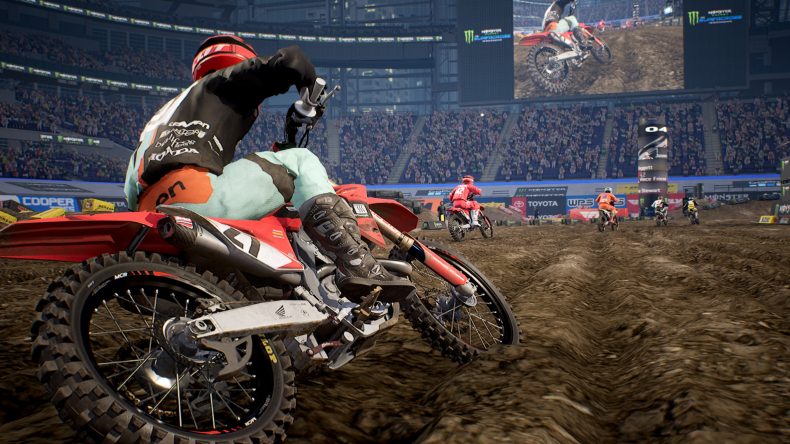 There is always a touch of dread when you’re asked to preview a sequel in a game series you didn’t particularly like. In that dread, however, lingers a hope that things might be different this time, that another chance will yield a more positive result. Happily, Monster Energy Supercross 3 might be one of those positive results, at least in its preview build. To be completely fair to developer Milestone, although I didn’t like the first game at all, I never got around to trying its first sequel. Monster Energy Supercross 3’s improvements seem to have addressed a lot of my concerns from that original game, and is rather fun at times.

The early build on PC gave me access to every rider in the 450sx class and every official circuit on the calendar, to race as much as possible in single races and time trials. That’s a fair amount of content available for a preview, with Compound circuits to come as part of the full release next month. Somewhat irritatingly, though, in order for me to change any visual or audio settings, I had to wait until I had loaded into an event. Not exactly a deal-breaker, but it seems an odd design choice. Why were these options not available from the main menu? Anyway, once my settings were sorted and I had the resolution settings and sound levels I wanted, I immediately noticed the impressive presentation and polish already present in this unfinished build. The first game didn’t have a huge amount of grunt in its polygon count, but made up for it with some realistic lighting, but Monster Energy Supercross 3 evens the playing field with some higher quality detail in the bikes and environments, which look all the better when you add the excellent lighting from floodlights and fireworks. All running smoothly at 60fps in 1080p, with just the occasional dip.

Before each race, the screen begins to darken at the edge and the sound ramps up, which does a great job of increasing the tension and getting you amped up for the gate dropping. As soon as it does, all hell breaks loose. The drag race to the first corner begins, dirt flying and engines roaring as over twenty riders make a beeline for the optimum racing line, inevitably leading to carnage. Although the AI generally feels much improved, you begin to just accept the odd flying bike as a few competitors collide at the start like it’s an online race with rowdy and unsportsmanlike players.

Once you make it through the pile-up into turn one, the improved bike physics become immediately apparent. Turning no longer feels twitchy and imprecise, and you don’t become separated from your bike if you so much as look at the barriers at the track’s edge. That’s not to say you’re now glued to your bike’s seat and it’s impossible to fall off, but if you do fall, it’s likely as a result of your own mistake. Perhaps you didn’t brake enough for that bend, or perhaps you misjudged a jump and overshot your landing, or perhaps you simply hit the throttle too hard and unbalanced yourself as you exited a tight corner. All of these things happened to me during my time with Monster Energy Supercross 3, so I know whereof I speak. Fortunately, these can be undone with the returning rewind function, erasing your mistakes as you learn to control your bike. There’s an impressive amount of challenge in this latest game too, with the AI being competitive at every level. Riders fight for every position, sometimes a little too hard, as they do in real races. This adds to the authenticity, as competitors get their elbows out, nudging each other through corners and over jumps. Thankfully, perhaps because the game would be unplayable otherwise, you won’t be knocked off your bike should a rival hit your body with a wheel, or vice versa.

All this pushing and shoving might unbalance your bike though, so you’ll need to make sure your front wheel isn’t going to bury itself in the mud when you land a jump. Upon landing, your weight might be a little too rear-heavy (no, I’m not saying you have a fat arse) and acceleration will only lead to your bike doing a backflip and your poor rider will be left sprawling in the dirt like a snow angel. Only less majestic and with limbs pointing in the wrong direction.

Within a few races, that dread I felt before playing Monster Energy Supercross 3 had faded away. Every race was exciting and action-packed, and everything looks stunning even in this unfinished version of the game. All of this makes me optimistic for next month’s full release.

Monster Energy Supercross 3 is coming to PC, PS4, Nintendo Switch, and Xbox One on February 4, 2020.