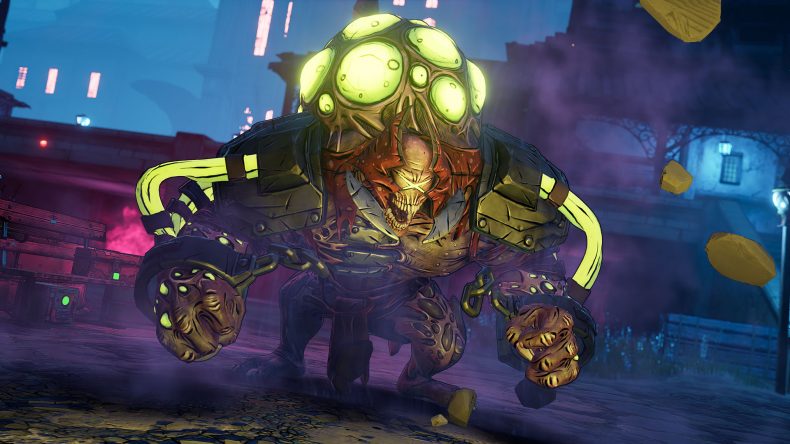 It’s been a busy time for Borderlands 3 at PAX East, as two big announcements were made today. Firstly, it’ll be releasing on Steam March 13, 2020, and will include PC crossplay with the Epic Games Launcher. Secondly, the second campaign add-on, ‘Guns, Love, and Tentacles: The Marriage of Wainwright & Hammerlock’, is launching March 26, 2020 across all platforms.

The announcements were made during the Gearbox Main Theater Show at PAX East earlier today, along with information regarding content coming to Borderlands 3 over the coming months. Thanks to some new SHiFT matchmaking functionality, crossplay between Steam and Epic Games launcher will be possible, with various features being adding the following weeks after its launch. As for the new campaign, the story follows Sir Alistair Hammerlock and Wainwright Jakobs and their engagement, and what better way to celebrate than on the icey planet of Xylourgos? The party is being held on Cursehaven, an eerie town located beneath the carcass of a dead Vault Monster.

A group of weird occultists who worship the carcass really want to break up proceedings, leaving you to fight against them and the evil they worship. Hammerlock and Wainwright’s wedding planner Gaige – a fugitive vault hunter – returns to help you in your assault. There’s dangerous enemies and bosses including alien beasts and hideously mutated occultists, interesting backstories of the cursed townfolk, new gear, weapns, and cosmetics, and more. Guns, Love, and Tentacles is included in the Borderlands 3 Season Pass and Super Deluxe Edition, and you can watch the trailer here:

Along with the two big announcements, concept art from the third campaign add-on was released, and you can see it here, and it’ll include dinosaurs and outlaws! All the free updates coming in the spring were outlined in a new content roadmap, starting with Mayhem Mode 2.0 in April, and the Revenge of the Cartels seasonal event.

In May, the second Takedown arrives to Borderlands 3. Similar to Takedown at the Maliwan Blacksite – which released last November – the Guardian Takedown will offer some of the most challenging content in the game. This intense standalone mission will be themed after the mysterious Eridians and will feature new bosses and new gear and cosmetics as well. The difficulty will scale to the size of the player party by default. However, if you want to experience the Takedown in its true form, you can select “True Takedown Mode,” which tunes the difficulty for a party of four fully leveled-up Vault Hunters regardless of party size.

There will be more info released soon, including what will be coming towards the later parts of 2020. You can catch the full PAX East panel on Bordelands’ Twitch Channel, which includes a chat with Studio Head Randy Pitchford, as well as Eli Roth, the newly-appointed director of the upcoming Borderlands movie, currently in development with Lionsgate and Arad Productions.

Video games are cool. Don't let anybody tell you any different.
MORE LIKE THIS
Borderlands 3PAX EastSteam