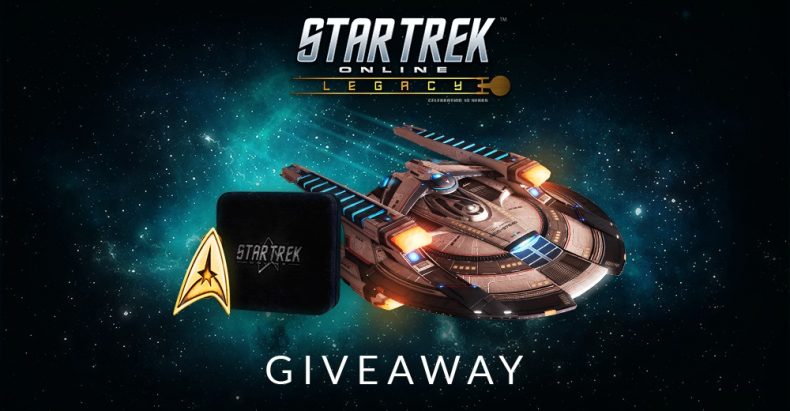 To coincide with the 10th Anniversary of Star Trek Online on PC, we’ve got loads of free stuff up for grabs, including plenty of in-game codes, and three limited edition STO Anniversary badges. The anniversary update celebrates 10 years of STO with brand new episodes featuring Jeri Ryan as Seven from Picard and Sonequa Martin-Green as Michael Burnham from Discovery, so if you want to enter, just follow the steps below.

We have three different tiers of prizes to give away. Our bronze prize is the Federation Elite Starter Pack, which will help new players get started in their journey to become acquainted with STO. The pack includes:

Our silver prize is the T6 Europa-Class Heavy Battlecruiser. This Europa-class heavy battlecruiser is well-suited to the frontiers of the federation, and will help greatly with exploration or defensive missions. It is named after the U.S.S. Europa – a Nimitz-class vessel lost at the infamous “Battle at the Binary Stars” under the command of Admiral Brett Anderson in 2256. This modern 25th-century counterpart to that ill-fated flagship of yesteryear has been fully outfitted with the latest in team support capabilities, and a substantial array of versatile armaments. If you want to win big and win a limited edition Star Trek Online Anniversary badge, as well as the Federation Fleet Admiral Faction in-game content, our gold prize is the best of the bunch. The in-game content includes:

To enter the competition, just follow the instructions below. We’ll be choosing the winners at random for each of the three tiers. The competition is for UK entrants only, and closes on February 18, 2020 at 12am. Good luck, and live long and prosper.

Video games are cool. Don't let anybody tell you any different.
MORE LIKE THIS
competitionStar Trek Onlinestar trek online: legacy