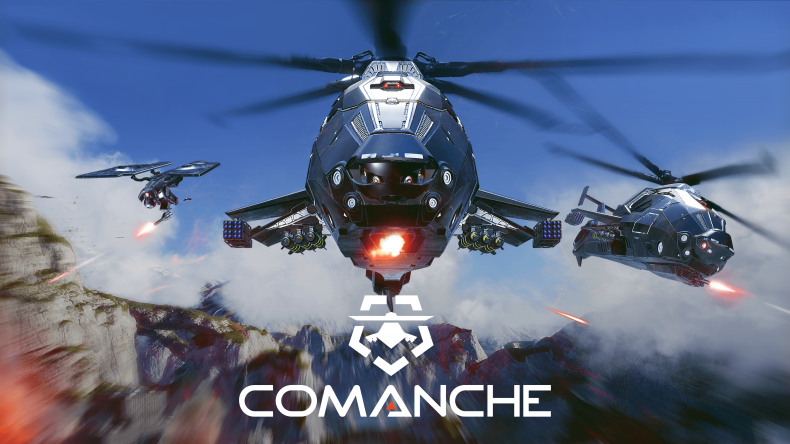 The Comanche series has been going for a long time. The first game arrived in 1992, but it’s come a long way since then and, although the series has lain dormant for nearly twenty years, THQ Nordic has revived the franchise for 2020. Developer NUKKLEAR has been handed the reins for Comanche’s return, and you can play the game for yourself on Steam, where it was recently released in Early Access form.

But should you play it for yourself? That’s the question we aim to answer for you, right here.

Being in Early Access means that Comanche is in its most basic form right now, with limited content and even more limited options. Indeed, there aren’t even proper graphics options, as I couldn’t change resolution settings. A quick look at the Steam discussions page told me that it defaults to your desktop resolution, but that wasn’t true at all. I ran it using both 1080p and 4K desktop resolutions, with no difference. It looked like it defaulted to 720p at best, which isn’t exactly ugly, but it did leave it looking rather pixelated. Basic resolution options should be present right from the start, even in Early Access. That said, despite the only visual options being an overall quality setting (I opted for “epic”), it still looks pretty good. The water looks lovely, with realistic reflections and waves lapping at the rocks below. Flying over forests, you can see individual trees (but don’t get too close, yeah? Things tend to get crashy and fiery) even as you pass by at speed. It’s just a shame it all seemed to look like I was viewing it through a nostalgic, pixelated filter.

While Comanche aims to recreate helicopter combat, it isn’t exactly a full simulation. Much like Ace Combat 7, it straddles the line between realism and arcade shooter, preferring a faster-paced approach to the genre. To support this, Comanche is set in a fictional near-future, albeit following an event based on recent history. A secret project continues the development of the cancelled RAH-66 Comanche, resulting in a technologically advanced, highly maneuverable, stealth helicopter. Complete with its own unhackable drones.

These drones are what separate this game from other helicopter combat games, as certain mission objectives require their use to infiltrate indoor environments. Suddenly, the game goes from aerial combat simulation to something resembling Descent, as you engage in drone-to-drone shootouts in confined spaces, or have to take down individual soldiers as you make your way to a control panel that will allow you access to a new area. I really quite enjoyed these parts of the game, as they weren’t held back by the awkwardness of the helicopter’s controls. Yes, I’m afraid to say that Comanche’s helicopter controls feel clumsy – at least when using a gamepad. You can select a more arcade control scheme, which feels more immediately accessible on a controller, or go for the pro option if you want more complete control over everything. Sadly, the options are very limited and so the currently-experimental arcade mode removes the option to strafe from side to side, and trying to rebind controls simply doesn’t work right now. Even when you opt for the pro scheme, the inversion options are seemingly backwards on certain movements, with no way to change it. It can make things rather difficult during combat situations as you struggle to avoid the laser-guided accuracy of enemy fire.

Thankfully, to counterbalance these control issues (whether intentionally or not) if you die in combat, which you probably will, all is not lost. Much like the original Battlefield: Bad Company, all the enemies you killed remain dead. You simply go back in to finish what you  started, though it sometimes feels like a war of attrition, smashing yourself into the enemy lines until they break.

This isn’t helped by the sheer length of story missions. To be fair, Comanche only has one mission right now, so perhaps it taking upwards of an hour to complete is good, content-wise. The available mission is at least split into chapters, so if you don’t fancy completing it in one go, you can quit out and return to the beginning of the last chapter you started. Though I hope you enjoy the overuse of military lingo and callsigns, because the game throws them about like they’re going out of fashion. I found myself tuning it out like white noise after a while.

Comanche also falls into that old trap of being always-online for no discernible reason. While playing the story mission, or even the tutorial, pressing the menu button doesn’t pause what’s going on in-game. Do single player games really still need to do that in 2020? Indeed, you can’t even play the campaign at all if the servers are struggling, which they apparently are. On multiple occasions, I couldn’t log in and the only option was to shut down the game entirely and relaunch to try again. Why not allow me to retry straight away? Hopefully these are teething issues during the Early Access period, but it’s not an ideal start.

That said, the online portion of the game does have potential, though it’s very much a ghost town in these early days. In all my time with the game, the multiplayer was barren. When I finally got a game after waiting for ten minutes, it usually ended up one-on-one in games meant for up to eight players. Others could join in mid-game, but it was still difficult to truly judge the quality of the online game. I only got to check out Black Box mode, in which destroyed Comanches drop their boxes and you have to race down in your drone to pick it up. In a full game, this would require immense teamwork to protect stationary helicopters while the pilot is on drone duty. In such small matches however, it’s relatively easy to do when you’ve got a good eight second window before the enemy respawns.

Comanche is a game that could be good fun once complete, but in its Early Access state, it’s missing too many basic features and this results in a really mixed experience. So, to answer the question I asked at the beginning: I really can’t recommend playing Comanche for yourself just yet, but it’s certainly got enough potential to warrant keeping an eye on how it develops.