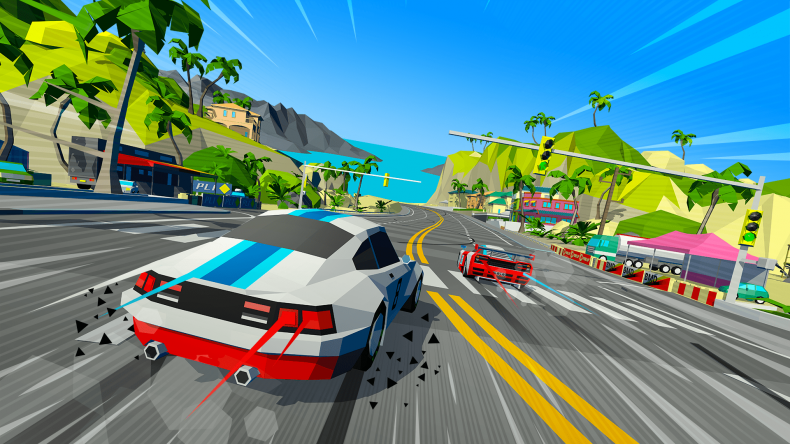 Let’s face it, most of the racers of this generation have been simulations of some sort. We’ve had Gran Turismo Sport, the Forza Motorsport games, the DiRT Rally and F1 series, even the Forza Horizon games have simulation-based handling, and it’s left the arcade side of the genre a bit unloved. It’s mostly been populated by kart games, really. Thankfully, Hotshot Racing is here to change that.

Sumo Digital, creator of the recent Sonic Racing games, and Lucky Mountain Games have decided that arcade racers need to have their time in the sun again, and so Hotshot Racing is revving its engine on the starting grid. With visuals inspired by some of the Sega greats like Daytona and even Virtua Racing, and gameplay that feels somewhere between Ridge Racer and Burnout, Hotshot Racing is all-in for that arcade rush.

Having spent some time with a demo version of the game, with a surprisingly large amount of content to explore, I’ve really enjoyed the almost nostalgic feeling that comes with this game, despite being more of a sim racing fan, myself. Cars feel light and responsive, no matter which class you choose, and every race feels exciting as the AI keeps pace with you to keep things competitive. The rubber banding isn’t too obvious either, and careful management of your boost stops it ever feeling like you’re always in danger of losing a race unfairly. Likewise, if the AI bashes you into a barrier, you’ve got the chance to catch up. Assuming you’re fast enough to hit the checkpoints before time runs out, of course.

Right from the start, even the title screen feels like a trip back to arcades in the 90s. The music is almost uplifting and the voice exclaiming, “Hotshot Racing,” when you press the A button, just feels very Sega. It takes me back to childhood memories of playing Sega Rally or Ridge Racer in Blackpool arcades as a kid, while on holiday with my family. It’s great.

Upon starting your first race, you get a little intro to the track (totally skippable, if you’re not into those things) complete with the overly enthusiastic announcer offering a few words about the location, while the camera pans over different sections of the circuit. On the start line, holding the accelerator just enough to keep your revs in the yellow so you get a boost start, you wait for the beeps and off you go, straight into high speed racing with seven other cars. Every one of those cars is driven by the eight characters available in Hotshot Racing, each and every one of them being some form of caricatured stereotype, from Alexa, the country girl looking to prove she can be a racer, and Aston the spoiled, smarmy Brit, all the way to Keiko the Japanese drifter and Mike the American boy scout. Each of them has their own little story, learned through winning a Grand Prix, which seems to be the game’s campaign mode. I was surprised when my first GP win was rewarded with a story cutscene.

Each character has four cars, each with strengths and weaknesses, but all equally competitive for all race venues. Balanced cars are all-rounders, as you’d expect, Acceleration favours fast starts and quick cornering, Speed is built purely for top speed but is slightly weaker around bends, and Drift tends to be great for cornering and gathering boost through drifting. Each car is cosmetically customisable, from the paint job to spoilers and even steering wheels, with loads of stuff unlocked through completing objectives as you race. Others are gifted for winning Grand Prix or trying out other game modes.

In this demo version, arcade races, Cops and Robbers, and Drive Or Explode are the three modes available to play outside of Grand Prix mode. However, the extra modes show off Hotshot Racing’s biggest weaknesses. Cops and Robbers is potentially fun, as you either play as a Robber and has to outrun the police, or (unsurprisingly) as a Cop and have to smash into the Robbers to take them out. However, this game mode was confusing as I simply couldn’t work out exactly how to earn enough money to win. It would seem obvious, except if you start as a Cop, it’s unclear when you actually make money and honestly, it’s too chaotic to really enjoy. Drive Or Explode is better, with its challenge of staying above a certain speed limit which increases with each checkpoint passed. However, it does show off how overly aggressive and harsh the AI can be, resulting in an experience that can be a bit hit-and-miss.

As I said earlier, the rubber banding is never really a problem, but the AI itself can be a real irritation. There’s nothing wrong with there being a bit of shunting and door-bashing, or occasionally being rear-ended (oo-err!) as an opponent drifts right into the back of you, but it’s disappointing to see those moments where the AI pushes into the back corner of your car, leaving you helpless as you can’t turn out of it and you end up in the wall or facing the wrong direction. I’m all for nostalgia, but that part of older games’ AI simply shouldn’t be happening in 2020. Especially not in a game that has timed checkpoints.

The actual racing is where Hotshot Racing really shines. Its sense of speed is enough to make you feel the rush of the race, but not so much that you’re screaming and crashing all the time. It’s also incredibly easy to control, with a real Mario Kart-like drifting system, as a quick tap of the brake will see the back end stepping out and low-poly smoke pouring from your tyres. Much like Nintendo’s iconic racer, you don’t have to worry about spinning out either, it’s designed to keep you moving forward at all times. Drifting fills up your boost bar, as does drafting behind cars ahead, and if you fill a section of the bar, a quick tap of the A button sees you rocketing toward the horizon. You can even save up your boosts, with up to four of them available overall. That’s a great tactic for the final lap, to keep yourself at the front of the pack.

It may have some issues with its AI and some weak game modes, but Hotshot Racing has incredible potential to win your heart through its racing. It has certainly won a place in mine. Plus, there is still time for Sumo Digital and Lucky Mountain Games to smooth out the creases and even add more tracks and improved game modes before its intended Spring release.