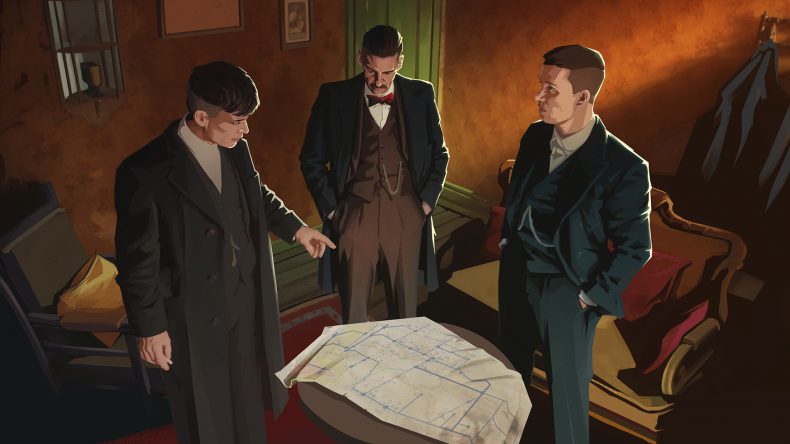 The award-winning TV show Peaky Blinders is heading to consoles and PC, thanks to FuturLab and Curve Digital. Take a look at its debut trailer:

Peaky Blinders: Mastermind is a puzzle-adventure, set before the events of the hit series’ first season. Players will join the Shelby family’s criminal organisation “as they discover a sinister plot to put Tommy out of business.” Using Tommy’s talent for forming complex strategies, the game will see those strategies come to life as players take control of key members of the Shelby family. “There’s a point in the show where Tommy Shelby explains he has no concern for the past, nor the future; all he cares about is a crucial moment he recalls the soldier’s minute,” details Marsden. “We designed our game around that idea, allowing the player to plan actions backward and forward in time, choreographing an ensemble cast of characters to synchronise their actions during these crucial moments. The player gets to feel like the smart and sophisticated leader that Tommy is, so we think becoming the mastermind will resonate with fans of the show and gamers alike.”

Players will be able to freely set and rewind each character’s path during missions, tuning their actions for perfect coordination, in order to solve complex puzzles. The game’s development has even involved Steven Knight, creator and writer of the TV show. He says:

“Peaky Blinders has become more than a TV show, it has become a worldwide phenomenon.  With the launch of the Peaky Blinders: Mastermind game we are inviting you to enter that world and take part in it, live in it and take your place beside the Shelby family as they fight for their very survival.  You’re going to have to be as smart as Tommy, as tough as Arthur, as ruthless as Polly. Good luck and remember, you really are a Peaky Blinder now.”

Peaky Blinders: Mastermind is due for release this Summer on PlayStation 4, Xbox One, Nintendo Switch and PC.