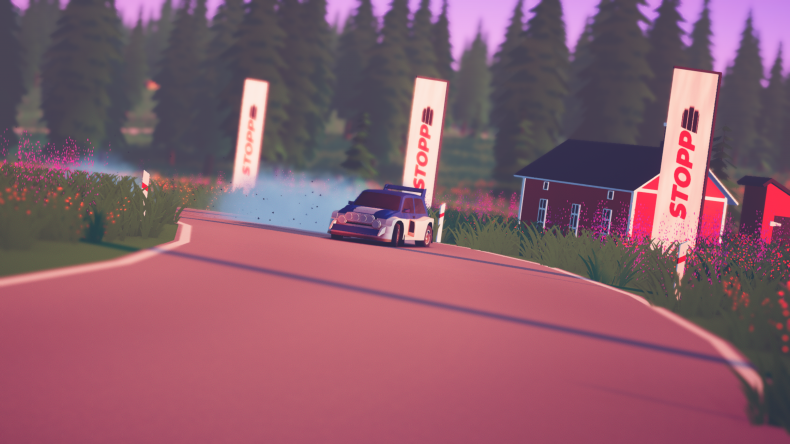 If you haven’t played Absolute Drift, Funselektor Labs’ fantastic, top-down drifting game, you really are missing out. It combined low-poly, almost Mirror’s Edge visuals with a surprisingly realistic handling model, to create a game that just felt like something different. It looked like it should play like Micro Machines, but actually having to think about real driving physics while looking at this semi-cutesy, highly stylised driving game, was a really unique experience.

It seems like art of rally is the natural evolution of what Funselektor Labs created in Absolute Drift. It takes that familiar, deceptively realistic handling model and although it still uses low-poly visuals, gone are the stark Mirror’s Edge whites and reds, instead replaced by environments filled with natural greens, browns and yellows as are common in the rally world. Think Lonely Mountains: Downhill or even Totally Accurate Battle Simulator, only without the daftness.

When I was made aware of art of rally, my ears pricked up like a dog hearing the sizzle of bacon cooking. Then came the realisation that a demo existed and, to continue the dog analogy, I raced through the download link as quickly as said dog bounding into the kitchen to get a piece of that bacon. Only I’m not as cute as a dog.

A tiny download of under 200mb meant that I was actually playing art of rally within minutes of finding out it existed. How often does that happen? The demo only comes with one stage in Finland, albeit with the ability to drive it in reverse, and you can cycle through different conditions. Driving in the wet is so much more intense than you would think, possibly more so than in the “proper” sims like WRC 8 and DiRT Rally 2, and driving at night requires every ounce of your concentration.

If you play the demo, take some time to familiarise yourself with the handling and controls, take it slow at first, because otherwise you’ll end up in the trees. You should never be ashamed to play around with the assists either (in any racing game), to find the sweet spot for you, personally. Even knowing it was from the maker of Absolute Drift, I still found myself forgetting how realistic it would feel, then proceeded to make a mess of things, particularly in my first wet drive. Thing is, I still found myself loving the experience.

art of rally is still a top-down driving game, you can’t play it using a cockpit camera or bonnet cam, don’t confuse it with a proper sim. It feels similar to DiRT 4 in its handling, giving you a bit more immediate movement and better control through braking and cornering, but turn off all the assists and it does a pretty good impression of the simulations.

Top-down racers can be problematic, mainly due to the camera not being able to properly show you what was ahead. Thankfully, art of rally’s intelligent camera always pans behind your car, keeping it at the bottom of the picture, saving the majority of the screen real estate for the road ahead. The faster you go, the further out the camera goes, allowing you plenty of time to process how to deal with that upcoming corner and when to start braking or lifting off the accelerator. 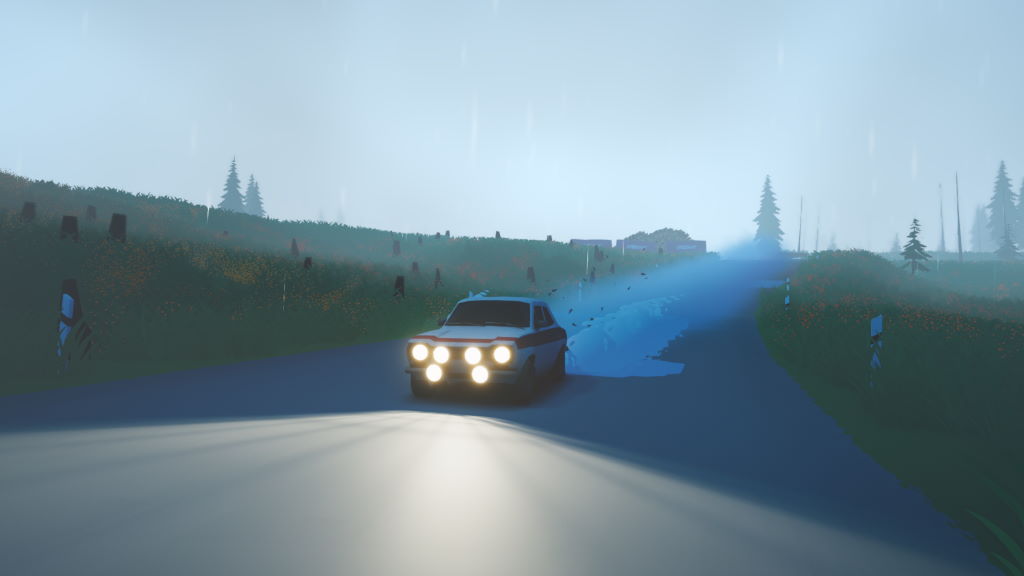 What it doesn’t always convey properly, however, is the changes in elevation. Specifically jumps and severe drops. As I learned the two available routes, I found myself suddenly unable to control my cars because it was actually in mid-air, which wasn’t necessarily apparent at first. Hopefully this is something that can be ironed out later (this is only a demo, after all) because it could be a rather large problem, especially without a co-driver giving you instructions. Whether the full game will add pace notes is unknown, but that would at least be one way of warning you about those incoming dangers. I think it says a lot that that’s my only real complaint about the demo.

One thing I would laud above most things, is the sound. Not just the throaty sound of the Group B 4r6 and the gunshot-like pops of its exhaust echoing through the Finnish forest, but the astonishingly good music provided by Tatreal. I normally don’t like having music going while I drive in motorsport games, but there was no way I was switching off those synths and Eighties-sounding beats. The soundtrack wouldn’t be out of place in Mass Effect or Deus Ex, I just found myself oddly energised while listening to art of rally’s music.

Being a lover of more realistic racing games, I love it when something like art of rally arrives out of left field. It feels both familiar and unique, simple but challenging, but above all, it’s a damn good time. I will be playing this demo for a long time, anxiously awaiting the full game later in 2020.