previous
Why The Last of Us Part II's release means the world to me
random
next
New story content 'Aftermath' coming to Mortal Kombat II, RoboCop joins the roster
7 comments 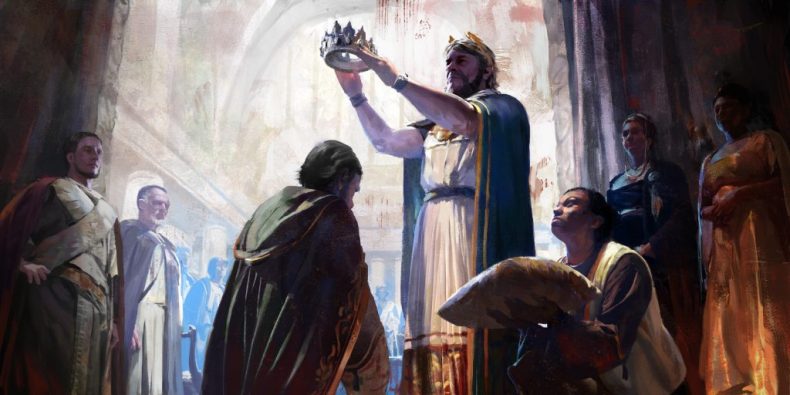 The strategy genre has been around for decades now, and sometimes it can be hard to imagine where it goes next. The 4X sub-genre has been through a lot, from the early days of Civilization and Age of Empires right through to the impressive Total War franchise. Comparisons are always made in new strategy titles to those previous stalwarts, and the same is true of new entry Old World as it enters Early Access on PC. With Soren Johnson, Lead Designer from Civilization IV at the helm, these reflections are even more justified. What is clear straight away is that whilst Old World is all about ancient history, it’s keen to frame itself as something new in a crowded genre.

The initial premise is one you’ve seen many times before. You take control of one of the main empires of history, from the Greeks, to the Romans to the Egyptians, and try and replicate their rise to supremacy. Delaying their inevitable downfalls for as long as possible might not be a bad idea either. But in a similar way to Total War: Three Kingdoms, the focus is very much on you as an individual, and the choices you make. These will not only affect the future for you and your family but also your chances for prosperity for your future empire. Firstly, you’ll be established as a main character from your chosen empire’s history. You’ll have a wife, and likely before long a child to call your own. Over the passage of time, you’ll be able to make decisions affecting your family, ranging from your child’s education and development, to potential nights of infidelity with unnamed members of your court. Your decisions always have consequences, sometimes this can affect whether your relationship or opinion rating from other family members flourishes or takes a hit.

But like with most things in Old World, it goes deeper than that. Your decisions really affect how everyone perceives you, including leaders of other empires and that can bode well or ill for you depending on how you manage it. Also different decisions can affect how the general population feels towards you too. You may be viewed as bold or bitter for example depending on decisions, and these traits can affect the productivity of your towns and cities, granting you bonuses or restrictions. This adds significant weight to some of the choices you need to take outside of the normal strategy management.

And there’s more than meets the eye to the management side too. There’s your familiar quantities of food and stone to manage to keep your people alive and structures maintained. You can also mine iron to help with weapon production for your militia. But aside from physical resources you’ll also be juggling other metrics that support your kingdom. You’ll manage Science to support your research, Culture to build Wonders and even a Training metric to upgrade your fighting units. It all adds a significant level of complexity to proceedings that can sometimes be missing from other strategy titles. The other main difference in Old World is how time passes. Each turn represents a year of your empire. And your life is finite, so it’s important to make the most of it. As you get older, and eventually die or rescind command, your heir will take over. So it is important the decisions you took in their upbringing and how it affected their traits and perception. You’ll also spend your lifetime building your Renown across the land by achieving feats and goals you set yourself. It will then be up to those who come after you to continue the legacy you began.

But aside from your individual lifespan, that yearly passage of time is integral to the main strategy sim gameplay. Everything takes a matter of years to produce, which in this case is turns. There’s no instant-build button, so every building or upgrade you begin is a time commitment, making the decision bear more weight. And your options are limited to the number of units at your disposal. A Worker can build additional buildings, either rural ones like farms and mines, or urban alternatives such as libraries or barracks. Settlers travel off to other city sites and establish a new city to broaden your reach. The various militia units can attack enemy strongholds to weaken your enemy, and Scouts can traverse the map, identifying threats or harvesting materials from the land to add to your collective pool.

Any unit requires a certain number of Orders to complete an action – another type of currency. These are regenerated each turn and control how flexible you can be each year. Certain decisions and buildings can also affect your Order regeneration rate. So it’ll be up to you to figure out the best use of your units in a given year. Is it better to concentrate on improving your cities, or expanding to new areas, and potentially fighting off enemy units? New units can be created at city centres, but each of these take numerous years to develop, and so there’s never an instant solution. Whilst some of these mechanics are explained during various tutorial stages during the first few turns of play, some of it isn’t. Old World takes more of a back seat when it comes to explaining itself, instead choosing to rely on your curiosity as a player. Hovering over a unit, resource or building will offer more insight to what’s happening, and there’s a literal encyclopedia of knowledge off the main menu of the game should you need further clarification on things. It rewards those who want to understand it’s layers and nuances, and how all of the choices you make have a real impact.

And that really is the crux of how Old World is to play. By having a lot of different metrics to juggle, a progression system that takes time to develop and purposeful choices, means it really makes you think. Everything you do carries weight, either for your empire right now, or how it might struggle or flourish in the future. If you focus on expansion instead of shoring up your military you could find yourself unstuck. Similarly if you don’t recruit enough Settlers, the enemy could tap up all the City Sites and you’re left languishing behind.

Often in strategy titles you can find a quick fix to get you out of a bind. Whether it’s rapidly creating additional military units or investing in a certain resource that you’re running low on. Old World doesn’t afford you that luxury. It requires you, well, to be more strategic than in other strategy games, because how you go about things has a long-term impact. And that makes Old World feel incredibly new and fascinating despite being a well-trodden genre in a familiar setting. It’s well thought through, reasonably well-executed, and is definitely one to keep an eye on as it progresses through its Early Access phase.