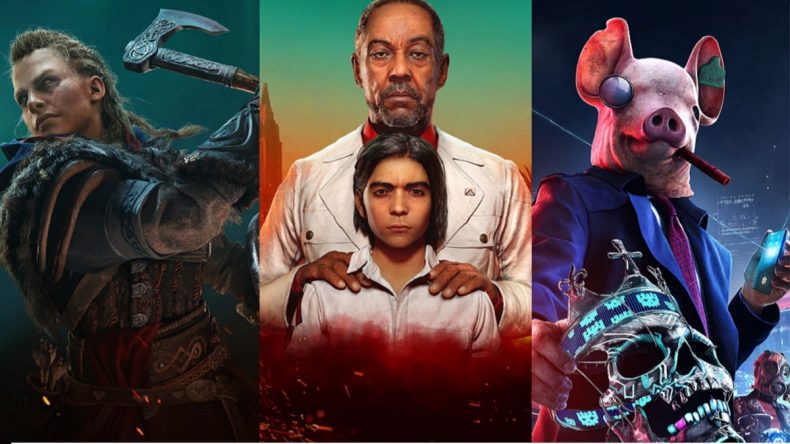 Last night Ubisoft showed off new trailers and gameplay from a variety of their upcoming games in their Ubisoft Forward presentation, along with release dates for Assassin’s Creed Valhalla and Watch Dogs Legion. We’ve put together all the announcements, along with the trailers that were revealed below.

With recent teases on social media, Far Cry 6 was finally revealed. Featuring Breaking Bad villain and star of The Mandalorian, Giancarlo Esposito front and centre, the trailer sees him teaching his son about being a ‘leader’ in a fractured country. What’s more, Far Cry 6 will be released on February 18, 2021 for PlayStation 4, PlayStation 5, Xbox One, Xbox Series X, PC, and Google Stadia.

Ubisoft announced that Assassin’s Creed Valhalla will be coming out on November 17, 2020 for PS4, PS5, Xbox One, Xbox Series X, PC, and Google Stadia. Players that buy the game on current-gen consoles will receive the game on next-gen at no additional cost. If you want to know more about how it is to play right now, you can read and watch our hands-on preview right here.

Ubisoft Forward kicked things off with a Watch Dogs Legion cinematic trailer directed by Emmy Award Winner Alberto Mielgo. We then got to see some amazing gameplay footage that showed off just how recruiting different citizens of London will help you to overthrow the hold Albion has on London. It was also announced Watch Dogs Legion would be releasing on October 29, 2020 for PS4, Xbox One, PC, and Google Stadia. It will also release on Xbox Series X and PS5 upon launch.

For those of you hyped for the new free-to-play battle royale shooter Hyper Scape, we got a brand new cinematic trailer. Not only did we get more of a feel for Hyper Scape, it was also announced that an open beta for the game was available straight away for all PC players.

For those still playing Ghost Recon Breakpoint, a new Title Update was announced that will bring AI teammates to the game, as well as a limited time event and more. It will drop on July 15 for PS4, Xbox One, and PC.

Another brand new game was announced in the form of Tom Clancy’s Elite Squad, a free-to-play mobile RPG featuring iconic characters from the Tom Clancy universe, including Sam Fisher from Splinter Cell. It will release August 27, 2020 for iOS and Android devices, and players that pre-register now on Google Play and the App Store will get exclusive in-game rewards, such as Montagne, the iconic operator from Rainbow Six Seige.

Video games are cool. Don't let anybody tell you any different.
MORE LIKE THIS
Assassins creed valhallaghost recon breakpointHyper ScapeUbisoft