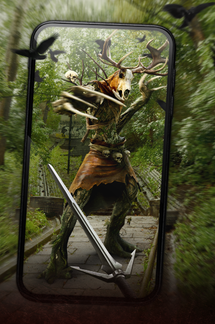 Spokko, a member of the CD PROJEKT family, has announced The Witcher: Monster Slayer is heading to mobile devices. This will be a free to play, augmented reality, location-based RPG set in The Witcher universe.

The Witcher: Monster Slayer is set before the events of The Witcher games series. Monsters are everywhere, and the new role of “witcher” is in charge of taking them down. It’s down to you to become an elite monster hunter using advanced AR features that will change your surroundings to that of the fantasy realm of The Witcher.

In Monster Slayer you can track, study and fight monsters, some of which are new and some you’ll recognise. Depending on the time of day and the real life weather conditions depends on what you’ll come across.

If you are going monster hunting though you’ll need to prepare. Preparation will include brewing potions and oils, crafting bombs and monster bait and upgrading your character. You’ll then be ready to make those monsters taste steel in first-person AR combat.

Monsters aren’t the only thing you’ll come across though. You can also take part in story-driven quests inspired by games in the series. These quests will test you as you attempt to become a professional monster slayer.

There is no release date for iOS or Android but this is due to be revealed later in the year.

For now you can have a nosey at The Witcher: Monster Slayer trailer just below this.