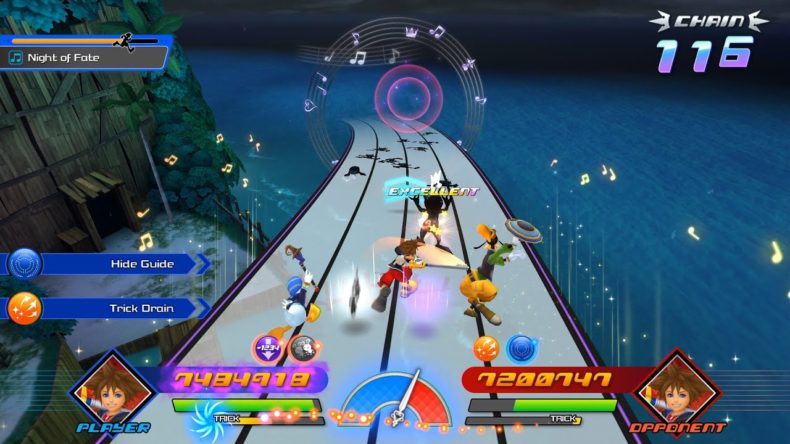 Kingdom Hearts is renowned for having a convoluted story. I’ve played all of them, and I still couldn’t tell you what they are about. For all the different threads and directions the narrative went throughout the series, it was still a hoot, and at the end of the day, you get to venture through multiple DIsney worlds, meeting tons of colourful characters from your favourite House of Mouse feature films. Kingdom Hearts: Melody of Memory takes a fresh look at the overarching story and places it in a rather different type of game. Although I only got to play four different levels – or tracks – it has the potential to lure old and new fans in, although it is a little rough around the edges.

Taking a break from the hack-and-slash action, Kingdom Hearts: Melody of Memory is a rhythm game that sees you press buttons in time with music whilst moving on rails through different worlds from within the series. Each level looks like a race track, with three lanes for each character you play as. For the demo, I was Sora, sharing the screen with Donald and Goofy. As you automatically move forward, pressing either L1, R1, or X will make you attack an enemy. If you press two of these buttons together, you attack two, and pressing all three will see Sora, Donald, and Goofy lash out in unity. 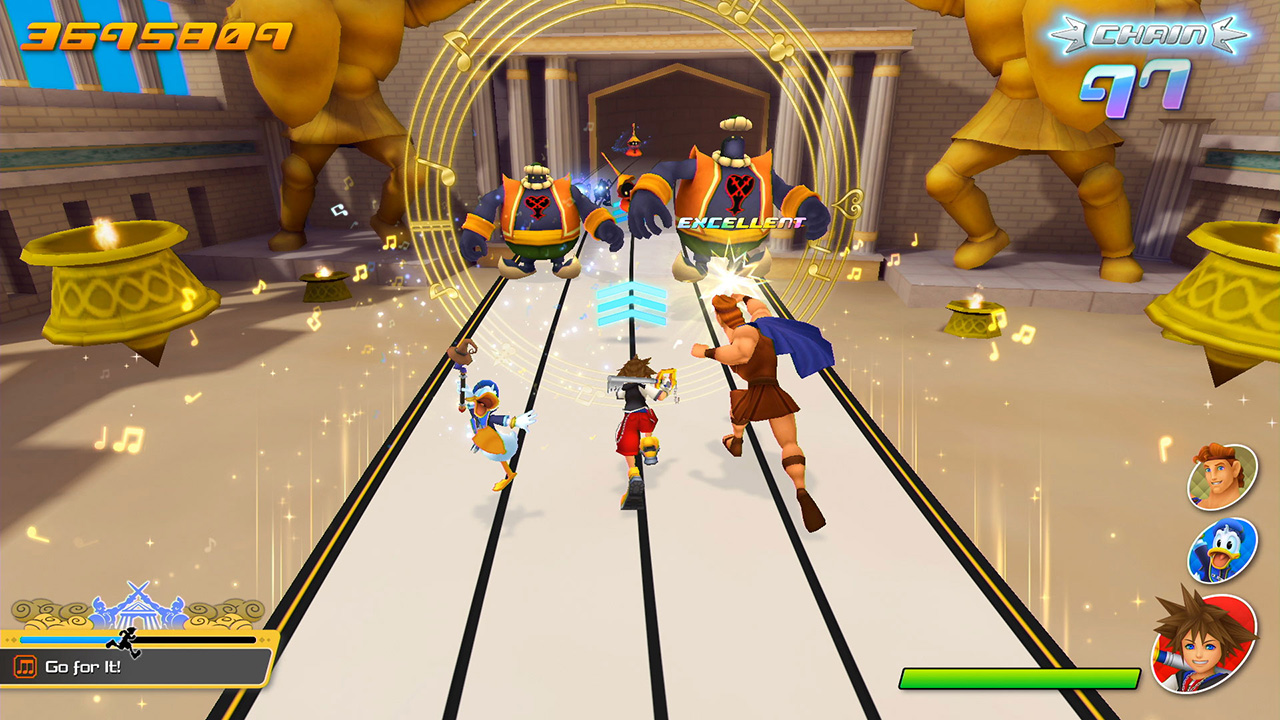 The more enemies, the more buttons you press. Simplifying attack patterns to just these three buttons means you’re not overwhelmed by different button prompts. So far, attacks can only be performed by pressing these buttons. Due to this, there are some other actions you can do, such as jumping and gliding. Jumping on a beat and then striking an enemy, and gliding from side to side whilst collecting notes opened up the gameplay somewhat, and pressing Triangle when encountering a gem lets you perform a special attack. There didn’t seem to be a whole lot else to do, but I am hoping new attacks and moves become available as I’m sure I would grow quite bored quite fast.

There were a fair few different enemy types, and using these skills can allow you to take them out in different ways. Bigger foes require more than one hit, and some launch projectiles at you, requiring you to jump out of the way. There’s still the normal Heartless to defeat, but I hope we get plenty more enemies, including some of the bosses that made the main games so memorable. There’s potential in flooding levels with myriad enemy types, and I just hope the full game offers a whole manner of attacks to deal with.

Some of the tracks made it quite easy to follow the beat, whilst other songs weren’t as defined. At times I found it hard to follow the music, which led to failed attempts and a severe loss of concentration. The soundtrack has always been a plus point in the series, and I loved listening to the music, but if you are making a successful rhythm game, the beat needs to be obvious if you are supposed to follow it. There are three difficulty settings, and the harder it is, the more XP you gain. Trying all three gave me an idea of how tough it was going to be, but after seeing how chaotic it can become, having those music beats as unclear as they sometimes can be means the game needs to improve on this. 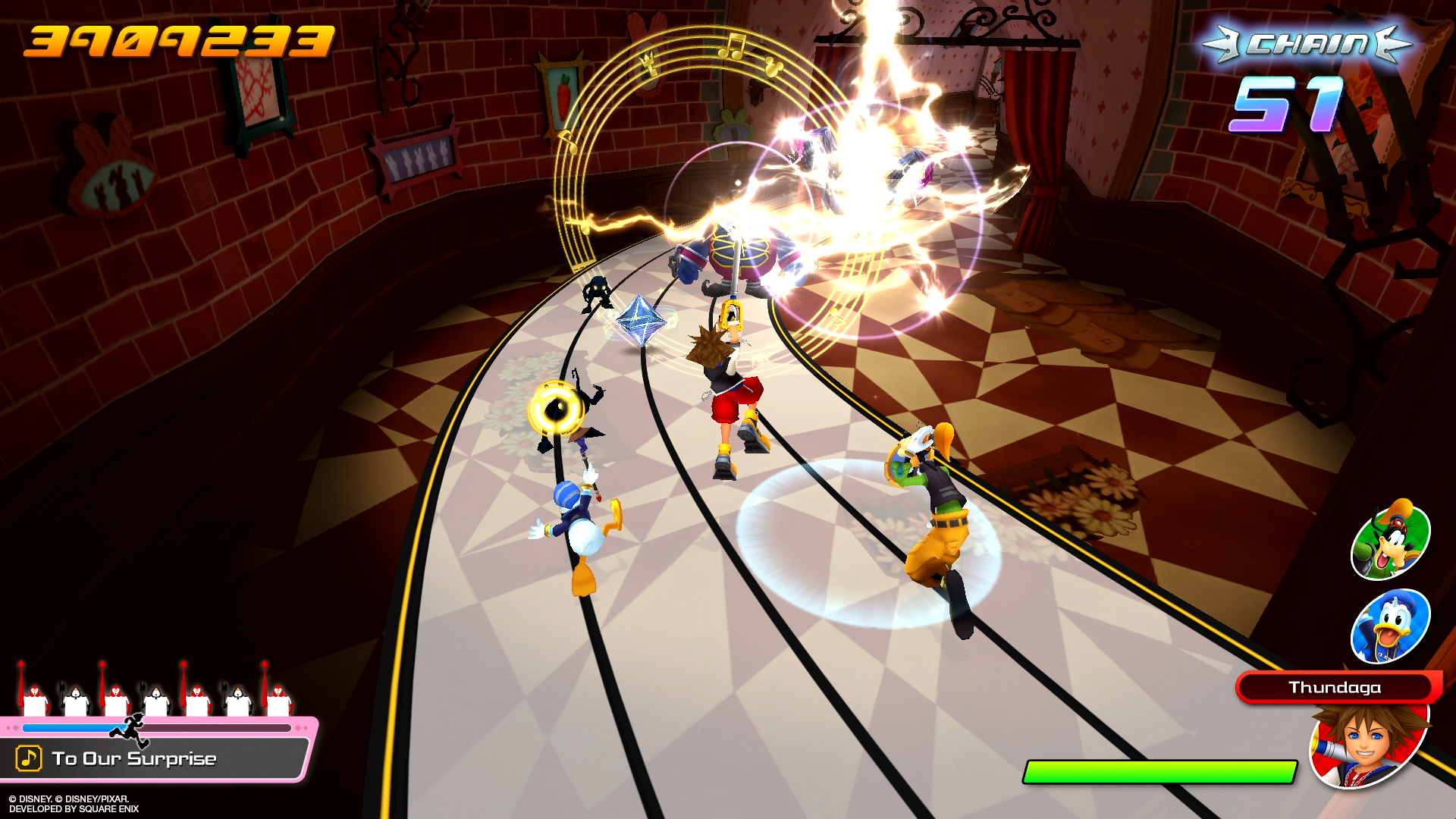 You can build chains of attacks to earn more XP, and the only way you aren’t allowed to finish is by losing all your health. Health is lost by unsuccessfully hitting an enemy or missing them completely, so the need to focus on every Heartless in the vicinity is vital. If you strike at exactly the right time, you will gain an ‘Excellent’ rating, building your score even more. Perhaps the biggest downer is the way it looks. Kingdom Hearts III wasn’t as stunning as I thought it might be, and this looked like a last-gen game in particular moments. There is still a bit of time to sharpen it up, but I was surprised at how graphically inferior it was to other PS4 games this late in its cycle.

Although there is very little to go on at the moment, I enjoyed my time with the Kingdom Hearts: Melody of Memory, demo and I hope to see tons more Disney content when the game releases. The gameplay is great, and when it works I enjoyed myself, but those subtle notes need to be more prominent. The visuals are disappointing, but there’s still time to improve some of the way it looks. Despite this, I think I’m going to enjoy it when it releases, especially if they include some original Disney tracks. Here’s hoping!

Video games are cool. Don't let anybody tell you any different.
MORE LIKE THIS
demoKingdom Heartskingdom hearts: melody of memorysquare enix