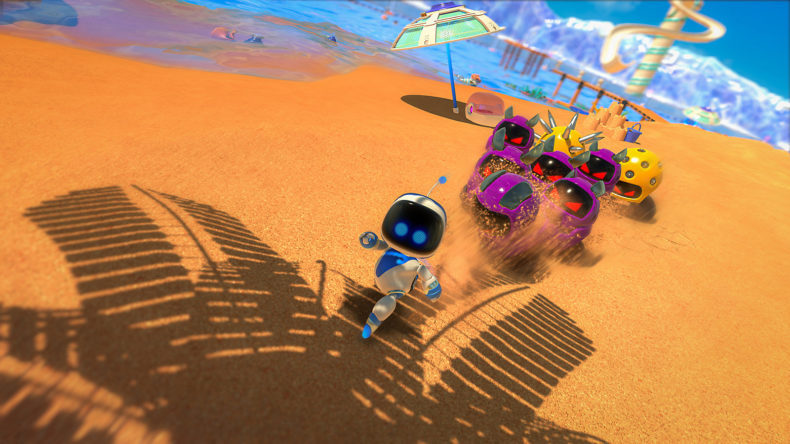 I remember the feeling of excitement as I took delivery of my PS5. For one, it had arrived on time unlike my absent Xbox Series X, and also the box was huge, like the best presents at Christmas when I was a kid. I was beaming, I couldn’t wait to get it all set up and experience truly next-gen gaming. “Think of the graphics, and the load times” I was saying to myself as I hurriedly unpacked and assembled the new shiny behemoth on my desk. I was wondering which of my two physical games I’d bought – Marvel’s Spider-Man: Miles Morales or Demon’s Souls – I would boot up first. After waiting for what felt like an eternity for all the updates and game transfers, I sat down to play. For some reason, I made the decision to actually try something else first. And it was the best decision I’ve made with my PS5.

I opted to play Astro’s Playroom, which came pre-installed on the PS5. I reasoned if I didn’t play it now, I maybe never would – falling into the list of games I keep meaning to go back to. So instead I booted it up, and I don’t think I stopped smiling from beginning to end.

As a self-confessed Nintendo fanboy, I feel I’m allowed to say I’ve grown up with some pretty solid platformers. Mario has always been at the forefront of platforming innovation, and even the release of Super Mario 3D All-Stars is a testament to the quality Nintendo has put out in the 3D platformer genre over the last two decades or so. So I’m used to quality (and I’ve played some poor imitations in my time), but the quality of platforming design in Astro’s Playroom is exquisite. From the opening of the first level where you shoot down a water slide into a gorgeous beach area, bussing with life, it’s clear there’s an amazing attention to detail here. 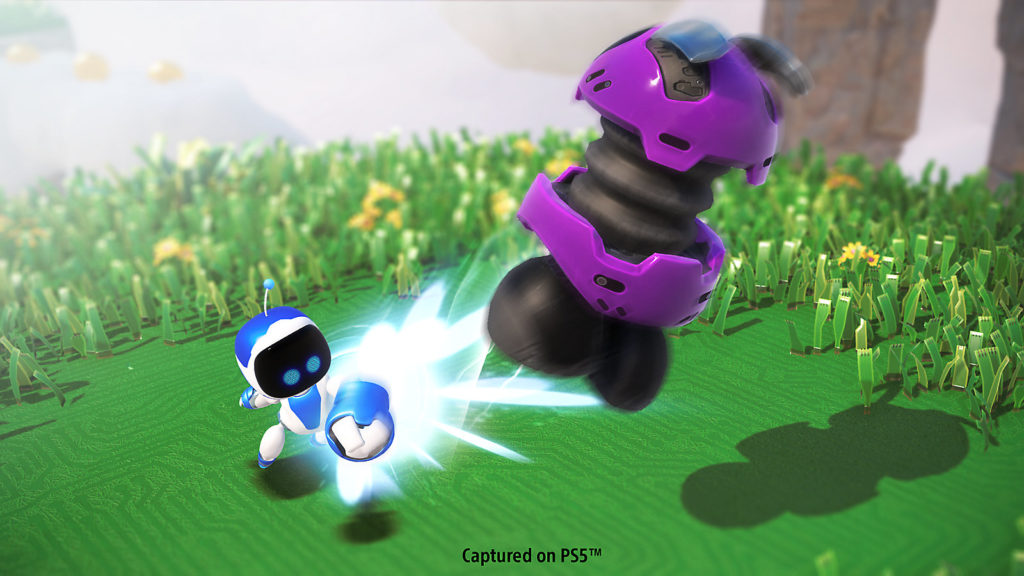 The movement, jumping, and general platforming feel tight and responsive as Astro leaps this way and that, meaning you always move how you think you should, not unlike everyone’s favourite plumber. Astro also makes quick work of the few enemies you might meet with some quick flurry attacks which land with purpose and precision.

So far, so good, but it wasn’t long into the opening level that I begin to appreciate something else. The DualSense controller in my hand is not just a simple conduit for button presses to actions on screen; it is clearly something more, something special, something surprising. I first really begin to notice it when I approach a blustering sandstorm obstructing the level’s checkpoint. The rumbling actually feels like small grains of sand jostling between my fingers, as the wind howls in my face. Rumble functionality for next-gen indeed, in your face Switch JoyCons.

But what elevated this almost straight away above a mere gimmick was what came next. After pushing through the sand and past a brief pool section, I came to a checkpoint and Astro donned a new suit. Now I’m using the triggers to bounce everywhere, shifting the controller to manage the direction, and pressing the trigger down harder to move further. It’s incredibly clever and very responsive, and I’m doing regular platforming, as well as smashing through walls, and dealing with moving platforms too. It blew my mind a little, and I wasn’t even through the first level yet. 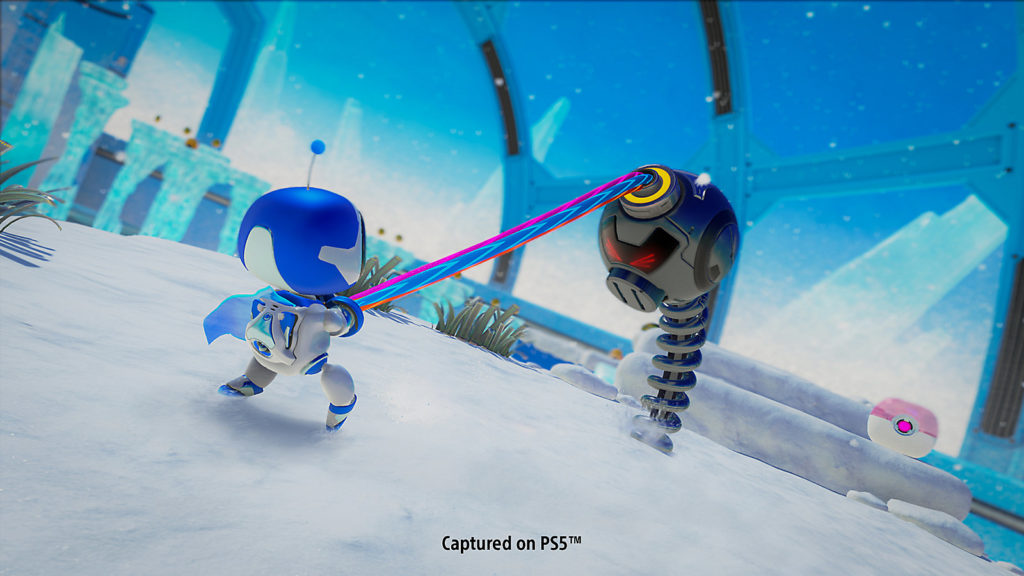 What followed were more and more examples of how to use the controller in different ways to move around. Future levels were split up into normal Astro platforming sections and then different suits to don with different traversal ideas. As well as springing around, I could also become a climbing monkey, swaying from outcrop to outcrop scaling vertical walls, or become a small rocket ship blasting through space. Each one felt unique, but accomplished in its execution, and I began to wonder just what this controller could be capable of moving forward, and I’m sure many developers are thinking the same.

So Astro’s Playroom is definitely “surprising”, but it’s also worth mentioning it’s deserving of the “nicest” moniker too. It looks lovely, with each level split into different themed areas, all with their own character and charm. The delightful melodies that play in the background are occasionally mixed in with rousing tunes or actual songs with lyrics to add more flair to proceedings. It’s also really quite amusing too, with plenty to see and do, not least the numerous Astro camera robots dotted around the place shooting scenes from well-known games and films. 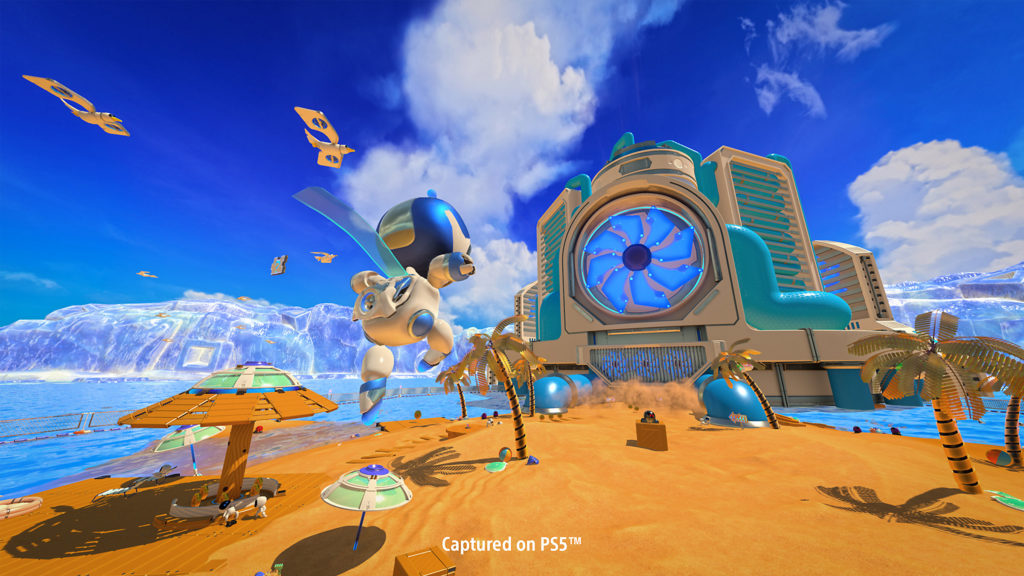 But perhaps the other most obvious thing about Astro’s Playroom is that it’s a true celebration of the era of Playstation. Sony are clearly proud of their ever-expanding gaming legacy and they aren’t afraid to show it off here. With plenty of collectibles to be had, which are different pieces of Sony gaming hardware throughout the last few decades, it’s hard not to reminisce. And it does it with such a lack of arrogance, and more just a joyful wish to share memories with you, that you can’t help but wrap yourself in it and be left smiling.

Astro’s Playroom is fully deserving of its 2020 #GIAGGOTY award for Nicest Surprise because it was just that. A consummate, engaging platformer that can stand against the very best of them, as well as lifting the lid on just what the DualSense controller can really do with some thought and innovation. And the experience was just so wholesome thanks to the nostalgia of its content and the high standard of its execution. As a built-in game to the PS5, no one was expecting much, and what we got was the perfect introduction to next-gen gaming on the PS5. If you own Sony’s next-gen console, and you haven’t yet played this, then you really should. And if you’re getting one in the future, do yourself a favour and make sure this is the first thing you play. You definitely won’t regret it.