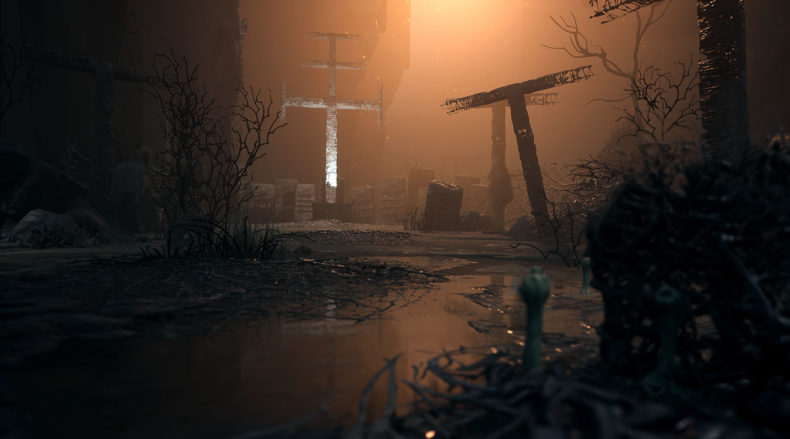 Bloober Team’s upcoming horror The Medium is without a doubt their most ambitious game to date, but it is also the first next-gen exclusive on Xbox Series X|S (discounting the PC release). With that in mind, we take a look at everything we know about the game so far, including what it’s about, the unique dual-reality gameplay, and the atmospheric soundtrack.

When does The Medium release?

What’s The Medium about?

According to The Medium’s website, the official synopsis reads:

Discover a dark mystery only a medium can solve. Explore the real world and the spirit world at the same time. Use your psychic abilities to solve puzzles spanning both worlds, uncover deeply disturbing secrets, and survive encounters with The Maw – an entity born from an unspeakable tragedy.

You’ll play as a medium called Marianne who visits a hotel in Krakow, Poland during the late 90s. Whilst there, you’ll uncover the mysteries of a horrific tragedy that happened there whilst exploring both the real world and the spirit world through dual-reality gameplay. The main antagonist is The Maw (voiced by voiceover legend Troy Baker), a malevolent spirit who comes after Marianne in both worlds. We’ve seen some impressive videos highlighting who the characters are, and what they’ll be up to when the game releases later this month. Only a few days ago, Bloober Team released a live action trailer which does a great job of getting us in the mood to understand and enjoy the main premise of the game.

Why does the artwork look familiar?

Zdzisław Beksiński, the famous Polish painter, has played a huge inspiration in the game’s design as well as its dark undertones. In his own words, Beksiński called his paintings “baroque” and “gothic,” and after seeing some of them from his “fantastic period,” you can see why. Lasting for almost 25 years, he created some disturbing paintings filled with horrifying backdrops, macabre figures, and hellish creations.

Bloober Team coined the term “dual-reality gameplay” as a way to describe what you’ll be doing whilst playing The Medium. Essentially, it means that you’ll be playing in both the real world and the spirit world at the same time. For example, when Marianne moves in the real world, picks something up, or interacts with a puzzle, she’ll do the same in the spirit world. To best highlight this, Bloober Team released a video earlier this month that showcases dual-reality gameplay in a 14-minute video.

Who has written the soundtrack?

If you haven’t already recognised the haunting tones of The Medium’s soundtrack through the various trailers, Silent Hill veteran Akira Yamaoka has created the soundtrack for The Medium along with Bloober Team stalwart, Arkadiusz Reikowski. This pairing promises some truly epic music, with both composers doing fantastic work in their respective genres.

Are there any pre-order bonuses?

If you pre-order The Medium on PC via Steam or Epic Games Store, you’ll receive the digital soundtrack and artbook for free. Unfortunately, there aren’t any pre-order bonuses on Xbox Series X|S.

Is The Medium coming to other platforms?

Right now the developer has said it’s only focusing on the announced platforms, but with previous games there’s been a period of 4 to 6 months of exclusivity. Blair Witch came to PC and Xbox One first, then later came to PS4 and Switch. Given that the studio is independent and has already recouped costs on the development, it’s highly likely the game will eventually come to PS5 as well, and we’d guess around halloween time, or perhaps 6 months after Xbox Series X|S release.

Video games are cool. Don't let anybody tell you any different.
MORE LIKE THIS
Bloober TeamThe Medium