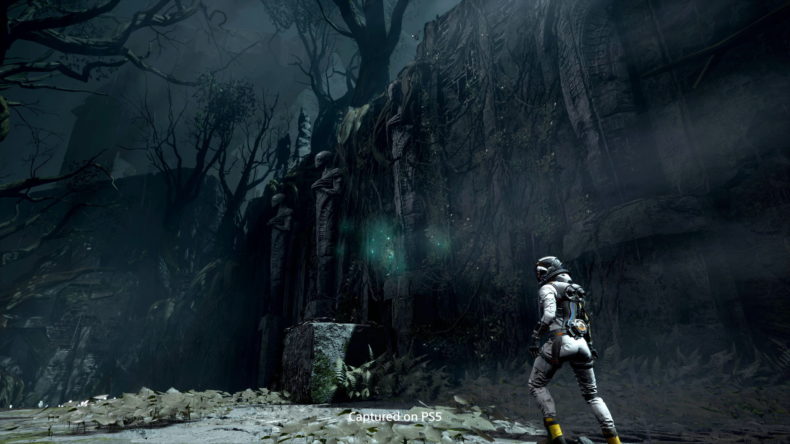 Mortality is a hard thing to live with, no pun intended. The thought that at some point everyone’s little bubble will burst is not something we like to talk or even think about on a regular basis, but it’s one of the most prevalent themes in video games where it’s often trivialised to an extent. I mean, if you could only play a game once, die, and then never ever play it again they wouldn’t be half as much fun, would they?

Like a multitude of games before it, the latest video game to not only feature death and respawns but to actively weave that theme into its very fabric is Returnal, the new third-person roguelike from Housemarque. Most famous for frantic top-down shooters like Dead Nation and Alienation, or the inimitable blaster, Resogun, Housemarque isn’t an outfit often associated with third-person action – but they will be after Returnal. Of that, I have no doubt. Having spent a few hours in its stunning, terrifying world, I can confidently say that as long as it continues the way it has started, Returnal has insane potential.

Returnal hands-on: Round and round again

Returnal follows Selene Vassos, a scout working for Astra, whose mission it is to investigate and survey distant worlds. In the intro she loses control of her ship, the Helios, and crashes on Atropos, a dark, apparently dead world littered with the remnants of an ancient civilization.

I was blown away immediately by how polished the opening few hours are. The swampy, forbidding forests of Atropos seethe with atmosphere; alien fauna sways and writhes, lighting the primordial gloom with bright smudges of bio-luminescence. At first, Selene believes she is alone – until she stumbles upon a body. Her own body, mauled and lifeless, discarded in the mud.

What follows is a deepening nightmare as you navigate the sepulchral undergrowth and crumbling ruins of this bizarre world, facing death over and over in a constant loop that sees you crash, survive, explore, die, each time growing just a little stronger and a little wiser. This is Metroid by way of Dark Souls, or perhaps the other way around, with Housemarque’s trademark panache for shooting and dodging stitched into every fibre.

Failure is a learning experience

As with many modern Roguelikes, each death is an opportunity to learn and adapt. Though it’s too early to comment on what Selene’s suite of abilities may eventually become, it isn’t long before you begin to unlock permanent upgrades to her suit that stay with you beyond each Cycle. Weapon upgrades remain, too, but weapons themselves don’t – and each time you rise again you’ll do so clutching your tiny sidearm and nothing else. 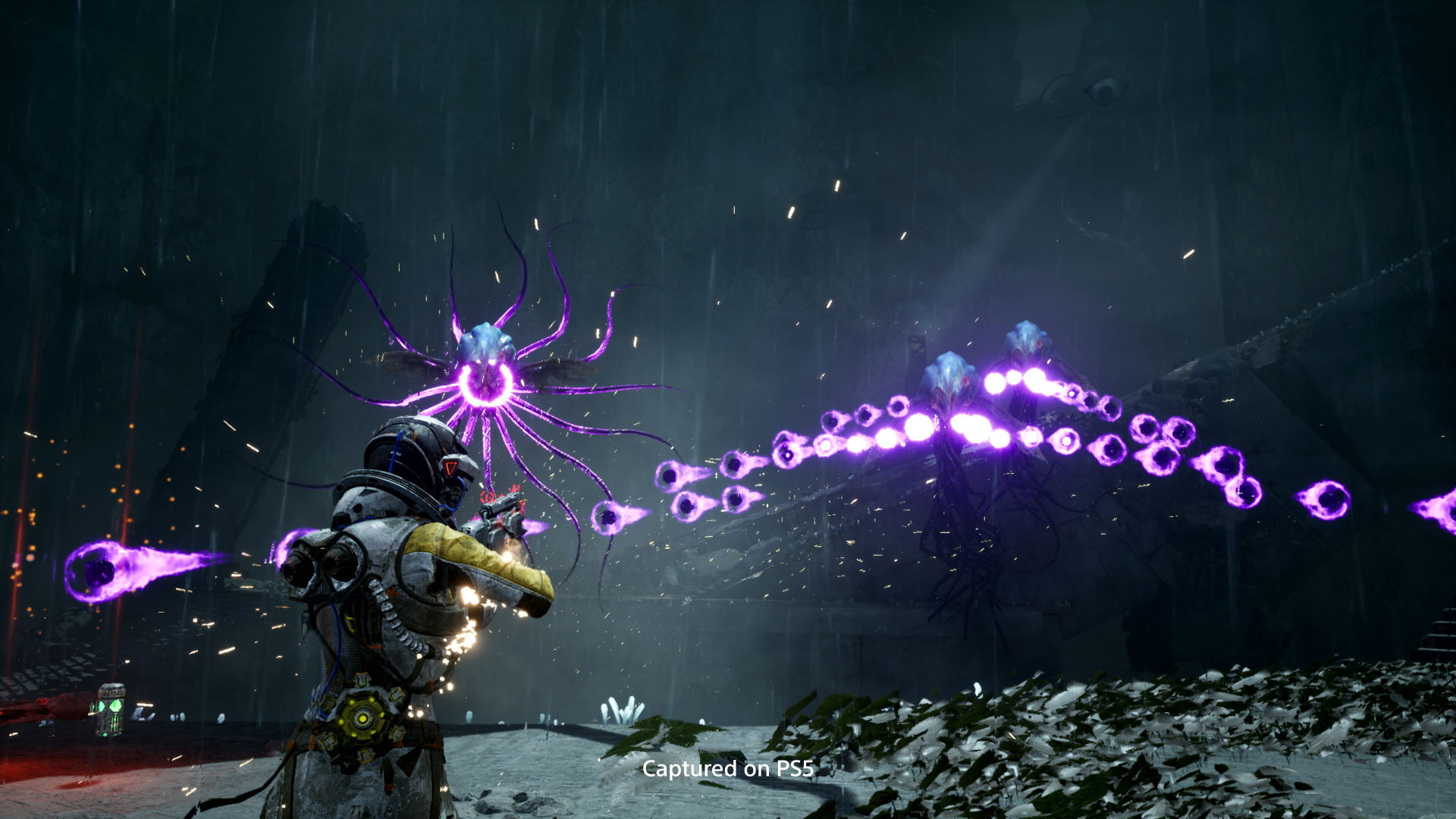 The Cycle itself is designed to throw you. I can’t tell if it’s procedurally generated or set on some kind of loop, but every new life presented me with a different version of Atropos. Some were wildly different, others identical save for an extra enemy here and there. But I saw collectibles and consumables – highlighted by spears of colour-coded light – up high on ledges I couldn’t hope to reach, hinting at suit upgrades yet to be unlocked.

As you fight, Selene will experience Adrenaline surges, each one (for a total of 5) increasing an intrinsic trait that makes her stronger or more capable for that particular Cycle. From a nifty reload mechanic to greater weapon proficiency, these surges are tactile, measurable indication that you’re getting better and tougher during the course of each Cycle, and as your abilities and confidence grow, so too will your range, aided by teleportation devices scattered around the ruins that can either target specific destinations of send you to the nearest linked device to aid in backtracking and exploration.

So far I haven’t seen quite enough of Returnal’s exploratory mechanics to know for sure if the systems in place have legs to carry it, but the combat is another matter. Selene’s suit allows her to jump, dodge and sustain a few good hits, while the weaponry I’ve seen – sidearm, alien assault rifle, and a bizarre scattergun – are incredibly satisfying to use, with an alternate fire mode that does devastating damage and repeatedly makes me jump with its recharge sound effect. 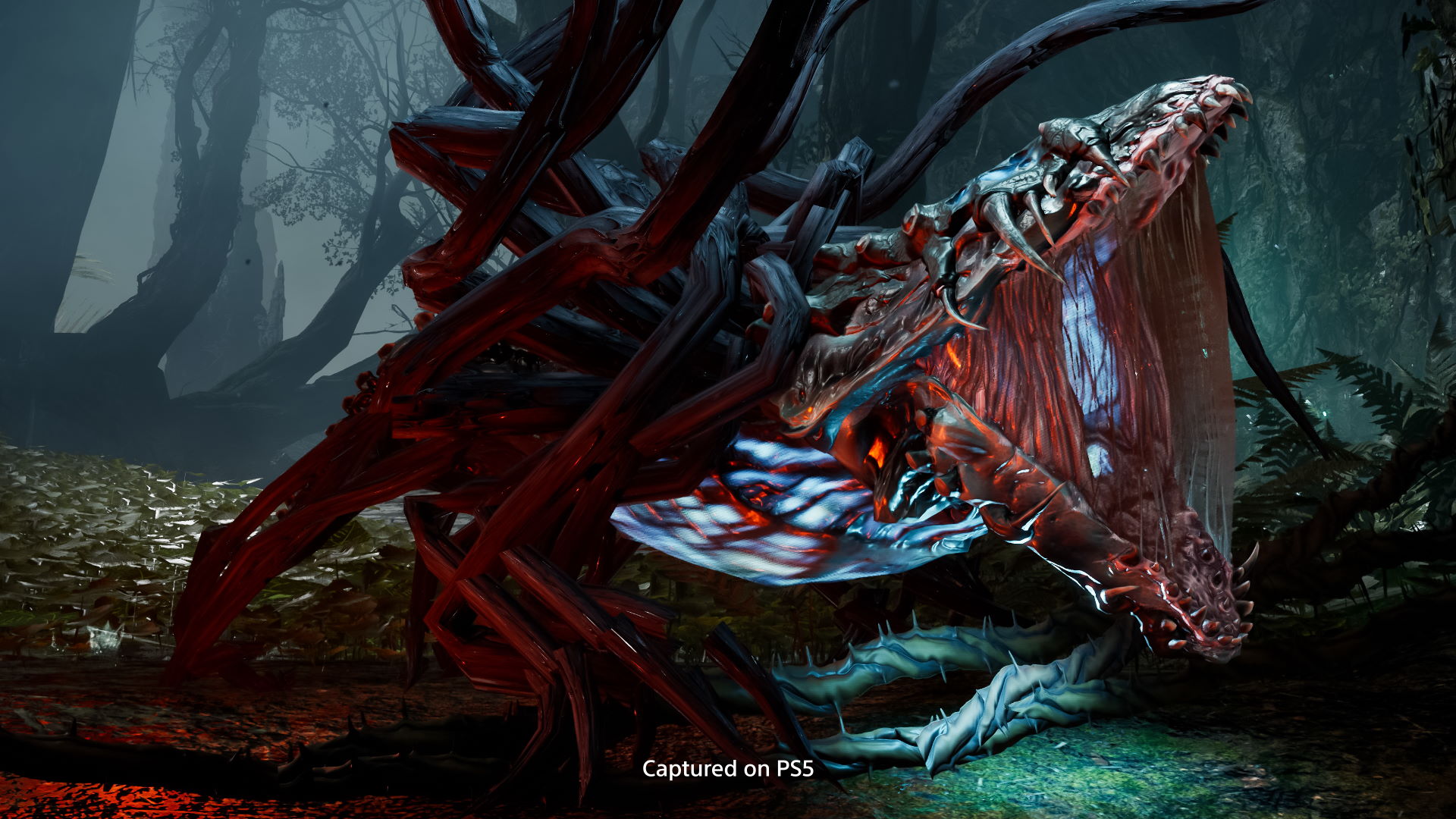 I will say that I’m finding the haptic feedback in the DualSense 5 a little distracting. Yes, it adds another dimension to the experience – you’ll feel the patter of rain, the shock of sustained damage, the buzz and shrill and whizz of technology in operation, and the palm-punch of gunfire, but the behaviour of the left trigger suggests that Housemarque don’t want you aiming down the sights of your weapon (fully depressing the left trigger charges your alternate fire mode), while the almost constant vibration through my hands made me put the controller down for a moment during the cutscenes between deaths.

At this early point, the greatest praise I’ll bestow upon Returnal is that I’m utterly enamoured. I’ve only come across a few mini-bosses so far; one was a huge tentacle beast that reminded me of the Mimics in Edge of Tomorrow (perhaps intentionally). It destroyed me in seconds and made me realise that I need to get much tougher before facing it again. But I was hooked in the first 20 minutes and the moment I turned off the PS5 I wanted to go back. At the moment, the biggest downfall is that coming out of the game resets your Cycle. If you want to stop midway you have to use the PS5’s rest function which, for many people (myself included) still causes issues with the PS5’s database.

Still, that aside, Returnal is shaping up to be an excellent addition to the PS5’s fledgling library of exclusives. It’s dark and stormy and immensely challenging, but so far it’s also satisfying, intriguing, and incredibly promising.

Senior Content Editor Mick has been playing games for over 30 years and writing about them for around 12. After drifting from site to site for a while, settling briefly at the now-defunct Made2Game and freelancing for the gone-but-not-forgotten NintendoGamer Magazine, he came at last to rest at Godisageek. Mick has been a reviewer, staff writer and content editor here for some time, while also moonlighting a little for Red Bull Games. He has 4 kids, has written 2 novels, and sometimes even manages to pay a bill or two. You'll usually find him defending the galaxy in Destiny 2, battling evil in Diablo 3, or lurking in the background on Twitter. Find him there @Jedi_Beats_Tank, or on XBL (JediWaster247), PSN (Jedi_Waster) or Nintendo (JediWaster).
MORE LIKE THIS
housemarquereturnalSony