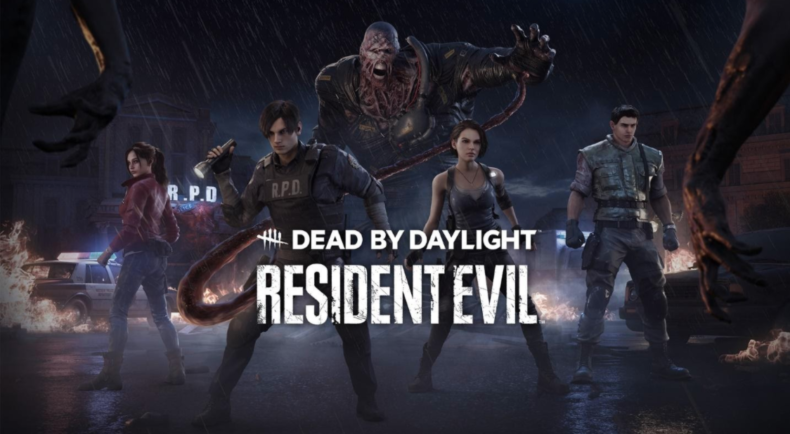 Dead by Daylight has announced the arrival of several beloved Resident Evil characters to the franchise. The long awaited Resident Evil Chapter is available now and includes the ability to play as Leon S. Kennedy, Jill Valentine, Nemesis and through Legendary Set pairings, Chris and Claire Redfield.

Dead by Daylight, Resident Evil has been anticipated by lovers of the game for some time. The chapter will include Nemesis, known in-game as The Tyrant. The Tyrant will be accompanied by zombies hailed as the first AI-controlled characters to step into The Fog. With the ability to infect Survivors with his powerful tentacle, leaving them not only weaker but louder.

Survivors Jill Valentine and Leon S. Kennedy can defend themselves using three perks unique to their character. However, there are also vaccines dispersed throughout the Raccoon City police station to relieve infections and continue their mission. Will they be able to fix generators, open the gates and save their lives?

Hailed as an important milestone for Dead by Daylight, Dave Richard, Creative Director adds the the addition of Resident Evil not only adds a popular horror franchise but new dynamics with the AI-controlled characters. This is where he feels that players will experience a brand-new experience with new elements to discover.

As well as Nemesis, Jill and Leon by purchasing the Legendary Sets they will also get to play as Chris Redfield and Claire Redfield. The S.T.A.R.S agents are available though The Resident Evil Collection in the in-game store.

Chris Redfield is paired in a Legendary Set with Leon S. Kennedy. Whilst Claire Redfield is available in a Legendary Set with Jill Valentine. The brother and sister wear their S.T.A.R.S Alpha Team uniforms featured in the original game. Dave Richard, Creative Director for Dead by Daylight hopes that the addition of Chris and Claire Redfield adds a richness to the chapter whilst giving the players a treat.

Dead by Daylight , Resident Evil Chapter is available now via Nintendo Switch, PS4, PS5, Stadia, Steam, Windows Store, Xbox One and Xbox Series X and S. Buyers of the Resident Evil Chapter will also get an free exclusive Umbrella Corporation in-game charm. Various other promotions are available to players with 50% off on selected items, including the Dead by Daylight game and chapters on their chosen platform.