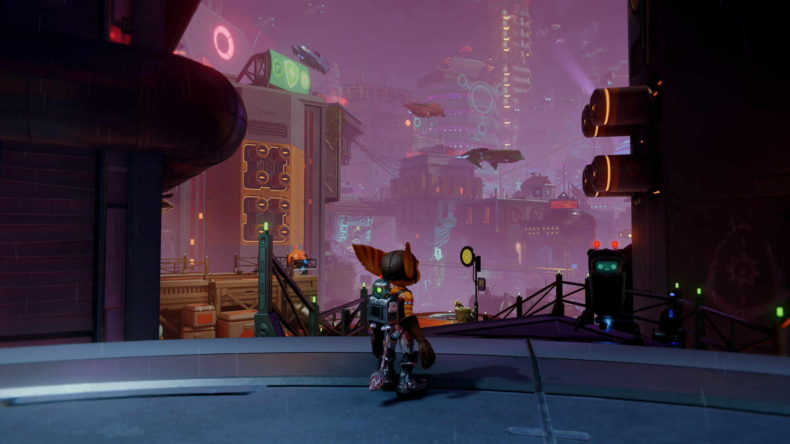 Whether you’re a newcomer to the series, or a veteran, we’ve got some Ratchet & Clank: Rift Apart tips to get you started, right here. While it’s not a highly difficult game as such, there are some things you need to know. We’re not going to teach you how to shoot a gun, but we’ll make sure you don’t make mistakes with your weaponry.

From smashing everything, to how the new armor collectibles work in the game: we’ve got you covered. Does the game have a major signpost for the “point of no return”? We’ll let you know. What weapons should you use? We’ll tell you! Let’s get started.

Use every weapon all the time

To level up weapons in Ratchet & Clank: Rift Apart, you need to use them. This may sound simple, but when we say use them; we mean use them a lot. You don’t have to get kills with them, as such, but sticking to tried and tested weapons will end badly.

Ultimately, you don’t control which ammo you pick up, either. So if you don’t get comfortable with the massive array of weapons on offer, you’ll struggle in some battles. There’s a lot going on as well, with the incredible 4K HDR visuals on offer. Make sure you know if it’s your weapon causing that explosion, and that it’s not the enemy doing it. 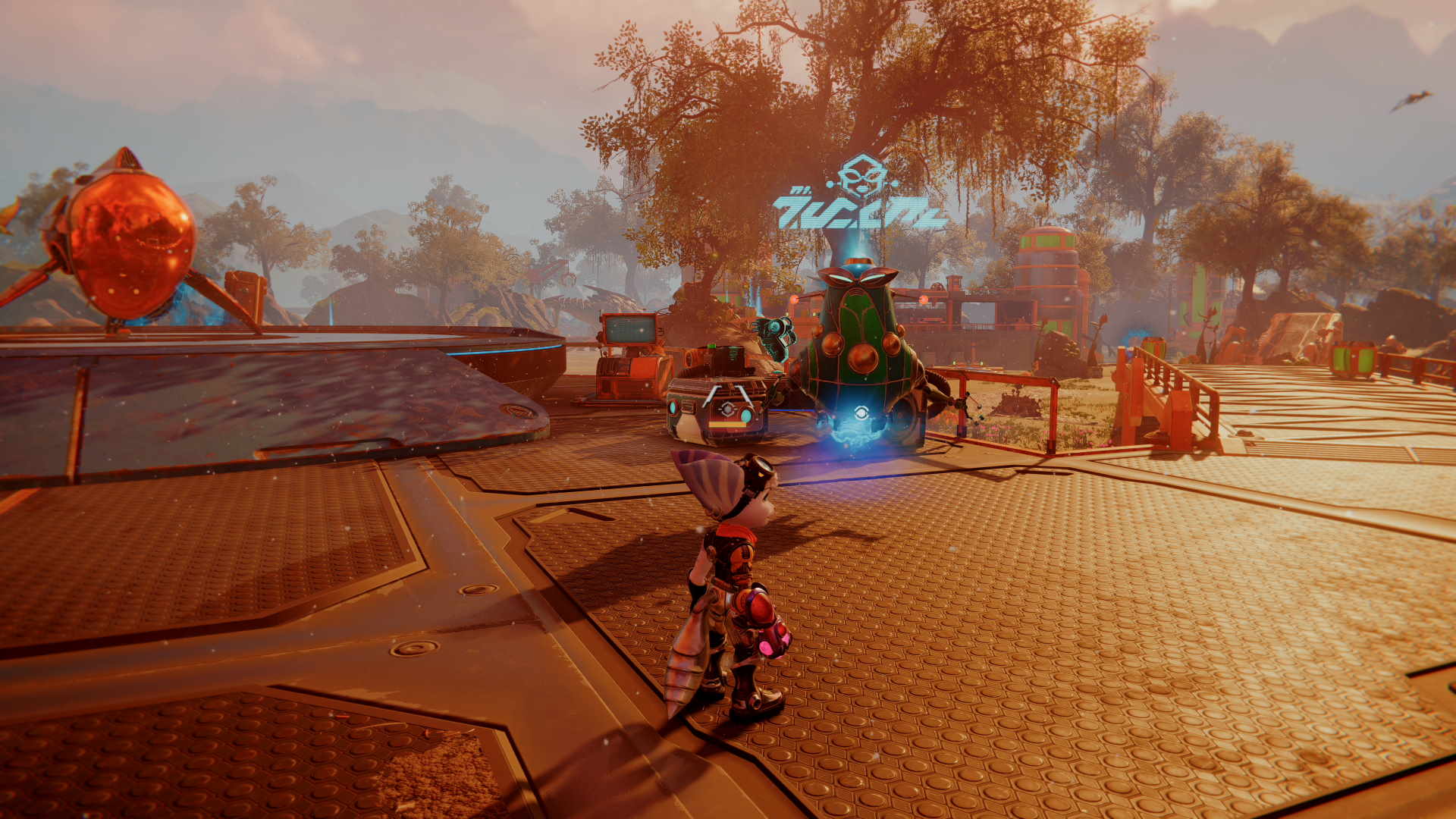 Leveling up weapons doesn’t just make them stronger, it opens new skill trees. Every time you level up, more skill trees are unlockable. To do this you need to collect raritanium, which is hidden in every planet of the game. Don’t be shy, though, as you can’t max out every weapon in one playthrough. In other words: once levelled up, enjoy your favourites.

Bolts are the main currency in Ratchet & Clank: Rift Apart, and they fall out of everything. You may think that smashing crates and enemies is enough? No. Smash anything that isn’t nailed down. And you know what, smash that as well.

You’ll likely end the game with over 100,000 spare bolts, doing this. There is a good reason to start your second playthrough with lots of currency, but we won’t spoil it here.

Fashion or function: get the suit pieces

In a lot of games these days you can get suits that buff your character in some way or another. In Rift Apart you also collect suits via optional side quests and rifts. The thing is, wearing these changes your appearance. You might not like the thought of Rivet or Ratchet looking strange with a helmet on or something, and that’s fine.

Luckily, collecting outfits buffs you permanently whether you wear the gear or not. Ratchet & Clank: Rift Apart only tells you this very briefly when you pick up your first piece of gear. So make sure you do the optional side content when you get the chance. These buffs range include all kinds of things. 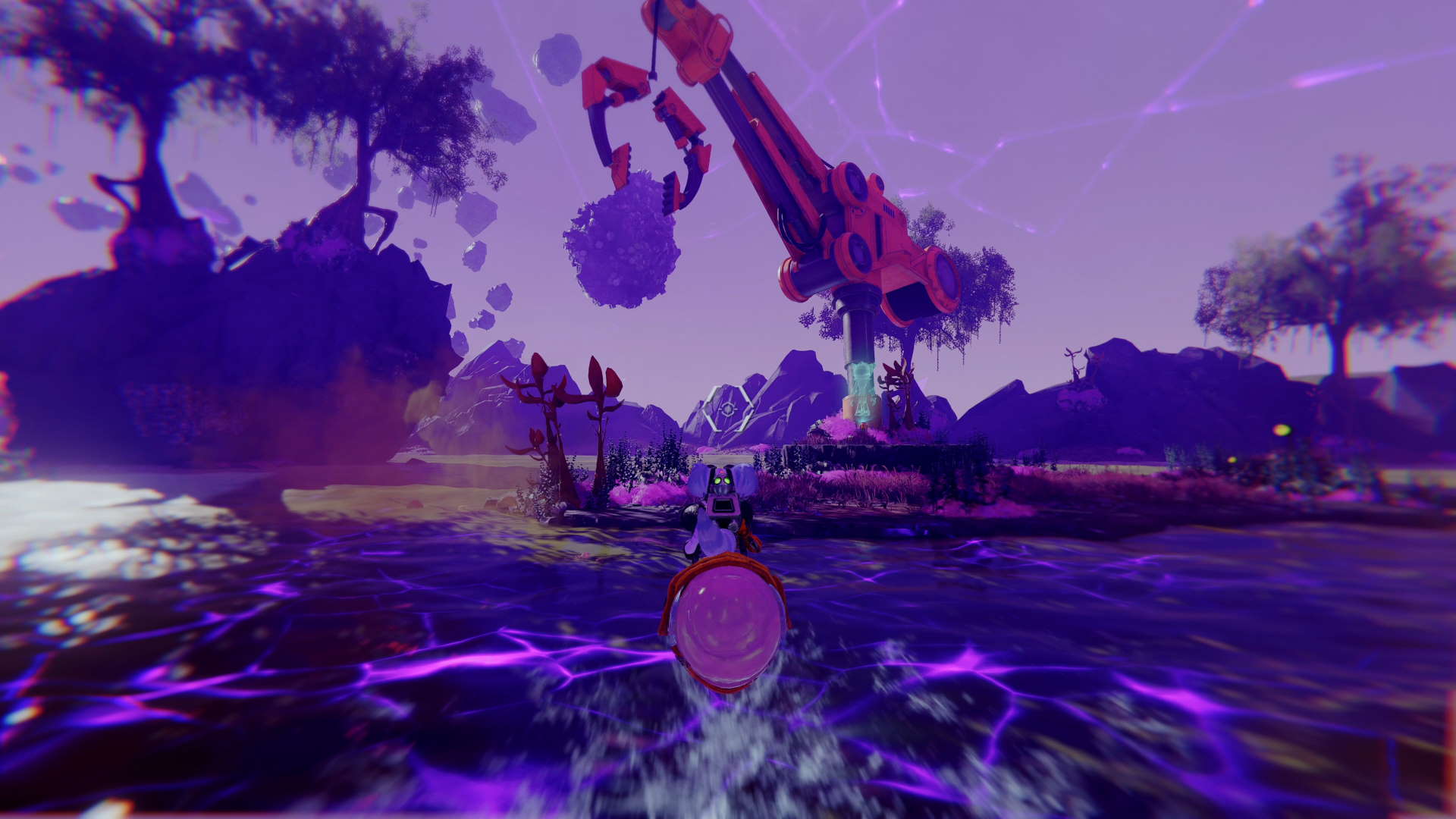 We’re talking about the possibility of a 5% damage decrease against pirates. Perhaps you prefer 5% more bolts per enemy beaten? That’s on offer, too. The short version is: get suits, buff up, be undefeatable.

You can find one very early on in the first rift you encounter as Rivet. It’s the rift where you are riding a speed slug, but ignore the route and go searching. This is an unmissable section, but you can miss the suit piece. Make sure you explore the dimensional rift to find it. Do this and you’ll grab two quick trophies in this one section: easy peasy!

The credits may roll, but it’s not over

As with many games these days, Rift Apart isn’t “finished” until you’re finished with it. You can choose to revert to save point before the “ending” begins, of course. You can also start a challenge mode run. In that mode there are… new things, we won’t spoil here. But it’s well worth doing if you enjoyed it the first time.

There’s nothing in the game you can miss if you don’t collect it first time. There are lots of optional side quests, for sure. But actually some of these cannot be completed the first time you come across them. Take the “Help Trudi” side quest, for example? You cannot get all of the Zurpstones when you first unlock this quest. 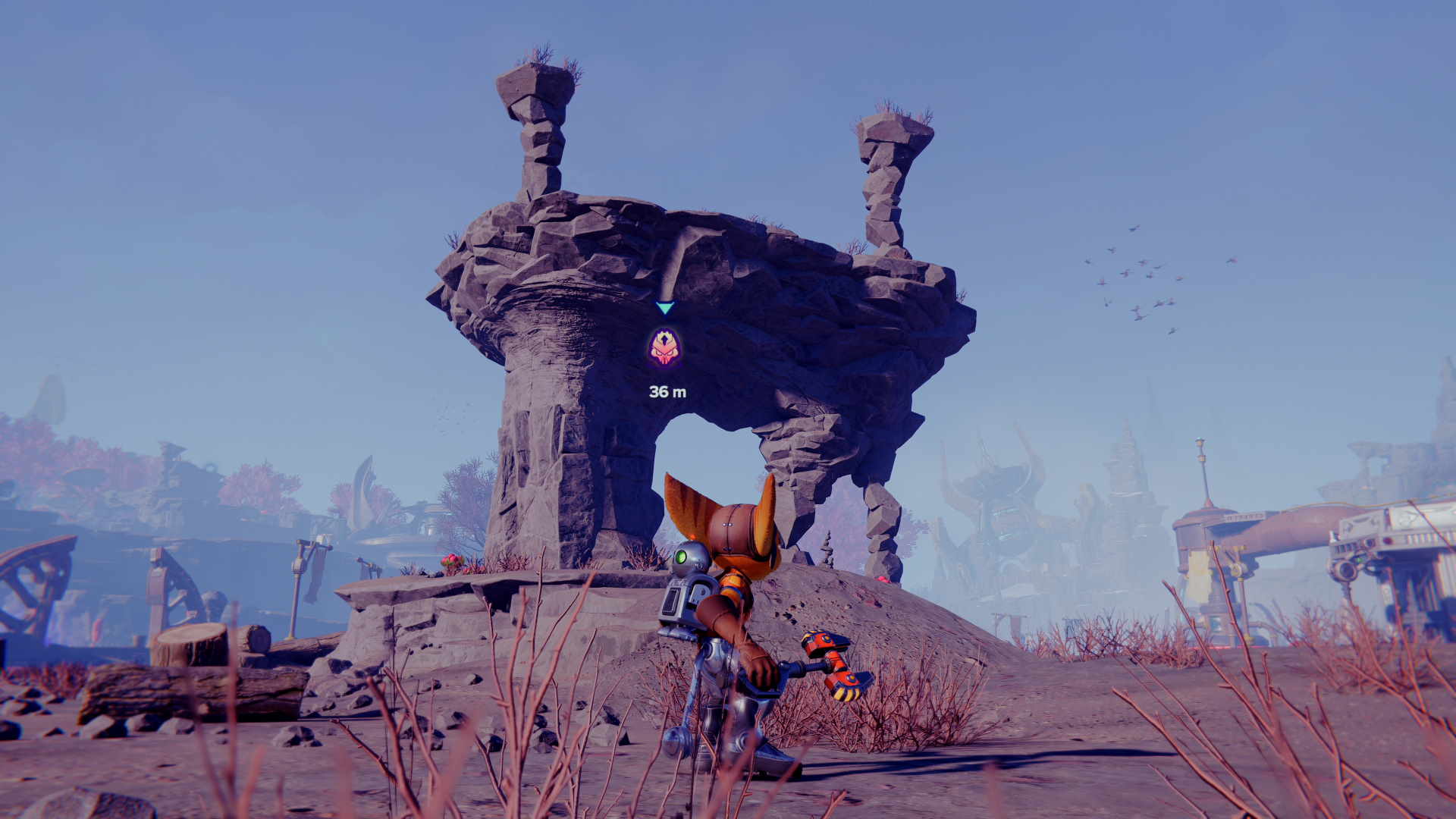 Take this Lorb, for example. We spent ages trying to work out how to get this one, but panicked we’d miss it if we continued the story. You can not only return to planets to mop up optional things later, but the game actively encourages it. There’s pocket dimensions that don’t appear when you first visit a planet, so always go back later and discover new things.

Death has no penalty, but the checkpoints are iffy

While you probably won’t die too much during combat in Ratchet & Clank: Rift Apart, what would a tips feature be without something about death? The most likely time you’ll die is when things get mega busy. You can easily fall into a crevice or, actually, into space. You won’t respawn with less health, you’ll just respawn at the checkpoint.

Sometimes these checkpoints aren’t great, and it can throw you back a bit. But don’t fret, because they’re never as far away as you think they are. Also, if you’re back on a planet the second time, there’s likely a warp point to speed things up.

Use the map, don’t miss the Map-O-Matic

One of the best items in the game is the Map-O-Matic. It highlights all but one of the collectibles on your map for you to see. Revisiting a planet with every item visible is amazing, and makes the collectathon so much easier at the end. 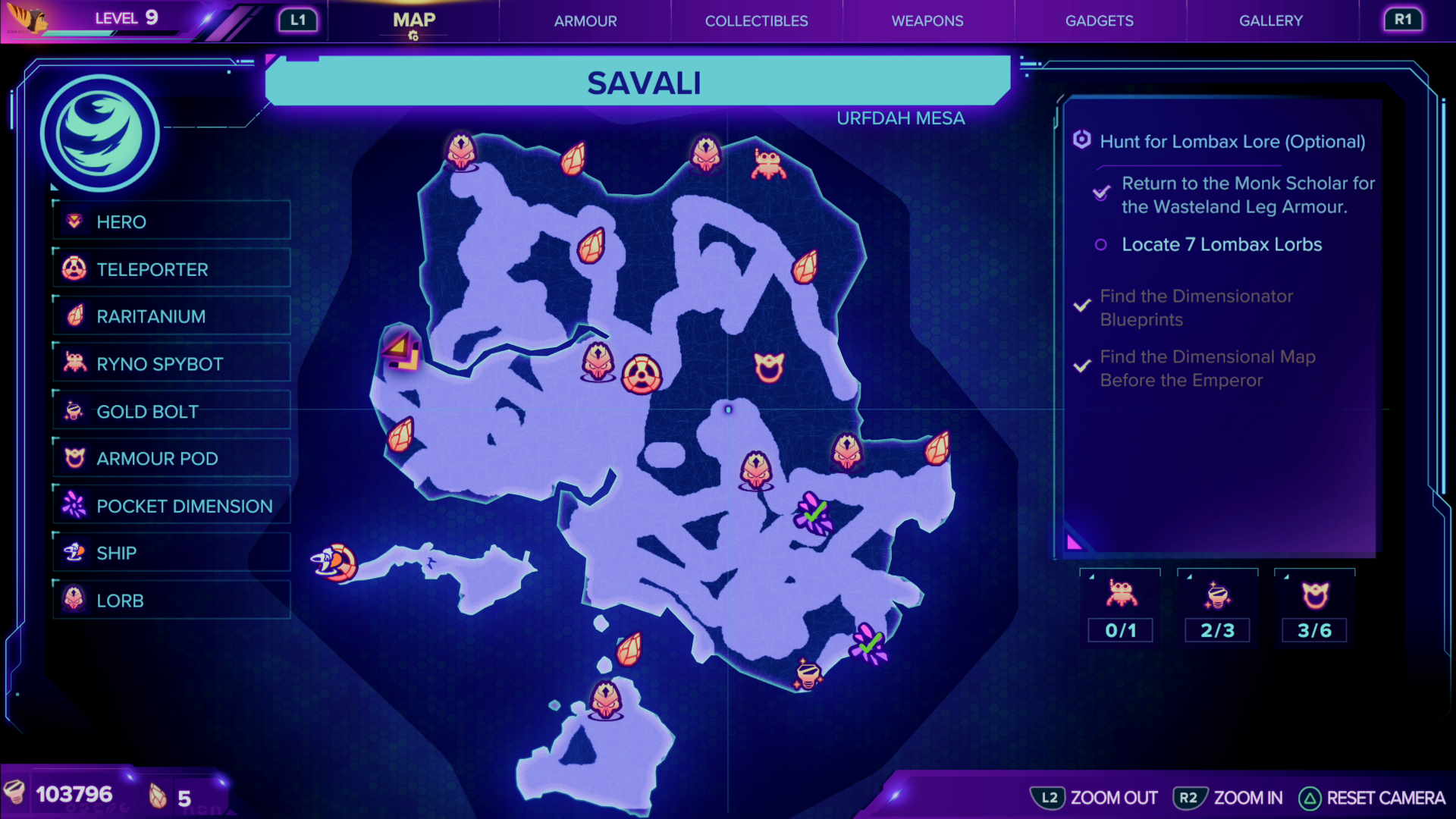 The only item it doesn’t show are the small bears that are hidden very well in the game. These are tiny, but to give you a head start, return to Rivet’s hideout and check the sofa for an easy one.

We hope you enjoyed our Ratchet & Clank: Rift Apart tips. Check out the site for further guides, including a few on how to unlock some of the trickier trophies. Oh and make sure you follow us on Social Media and Subscribe on YouTube to never miss a new feature.