previous
Gardevoir is now available in Pokémon UNITE
random
next
"The Switch version was quite a challenge for us": Unbound: Worlds Apart interview
0 comments 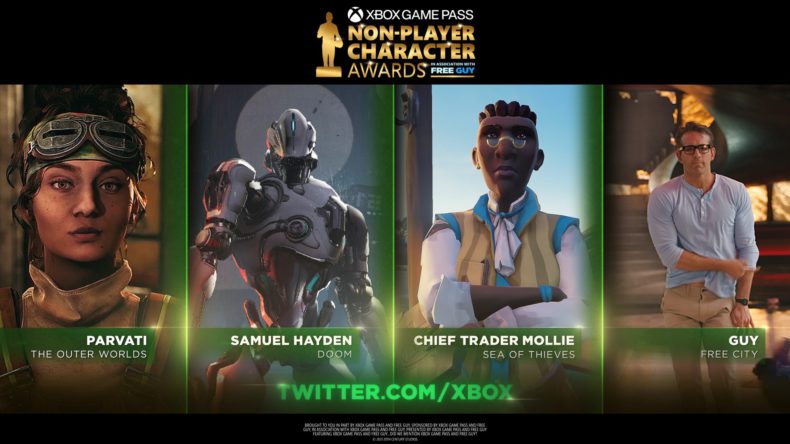 In conjunction with the upcoming movie Free Guy, Ryan Reynolds and Xbox are joining forces to celebrate the unsung heroes of gaming with the first-ever Non-Player Character awards. This makes more sense than you might imagine, because Free Guy stars Reynolds as Guy – a bank teller NPC in an open world video game that is about to shut down for good.

There are four nominees up for this special award, and you can vote for your favourite on Twitter here. First up is Parvati, a mechanic and potential follower from The Outer Wilds. There’s also Samual Hayden from Doom and Doom Eternal, the UAC official who may end up more machine than man. Sea of Theives is also represented by Chief Trader Mollie, a quest giver that I couldn’t have named if you paid me despite having spent hundreds of hours pirating about. The last entry is Guy, a cheeky addition from the upcoming Ryan Reynolds movie.

“Today, Xbox Game Pass and 20th Century Studios’ Free Guy announced the first-ever Non-Player Character Awards, celebrating the unsung heroes of video games. This comes ahead of the release of the movie Free Guy on August 13, 2021, about a bank teller named Guy (Ryan Reynolds) who realizes he’s in an open world video game that will soon go offline.”

It’s just a bit of fun, but why not vote for your favourite (or a character from a movie I suppose). If you aren’t sure who to pick, all the games are handily on Game Pass and are well worth playing. Voting end on August 3rd, so don’t delay!