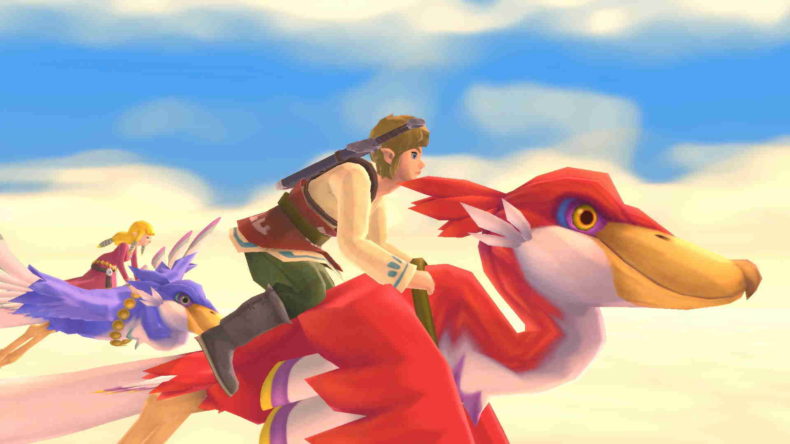 Its strange to think that The Legend of Zelda: Skyward Sword has developed such a strange legacy, with as many decrying it as the black sheep of the franchise as eulogising its ethereal, dream-like beauty. Going back ten years I vividly remember getting my hands on a build of it for the first time at an event in London. I knew it was going to be special. I could feel the spirit of the franchise envelop me and send goosebumps coursing along my arms as I wielded young Link’s arsenal in my hand. It looked and felt different. Magical. Sadly the only picture I can find from this day is of a Tanooki suit Mario staring at my editor’s arse.

Many now cite difficulties with the Motion Plus controls, and pick at the structure, the art style, and everything else in between. Strange because at the time of release it was almost universally acclaimed. This wasn’t a prime piece of art that was misunderstood at the time, like, say, Pinkerton by Weezer – mauled by the critics yet held as a touchstone of emo twenty years later. Skyward Sword was a great game, and now it is about to get even better. So why is it going to be essential in 2021?

Nintendo have a great track record with remasters 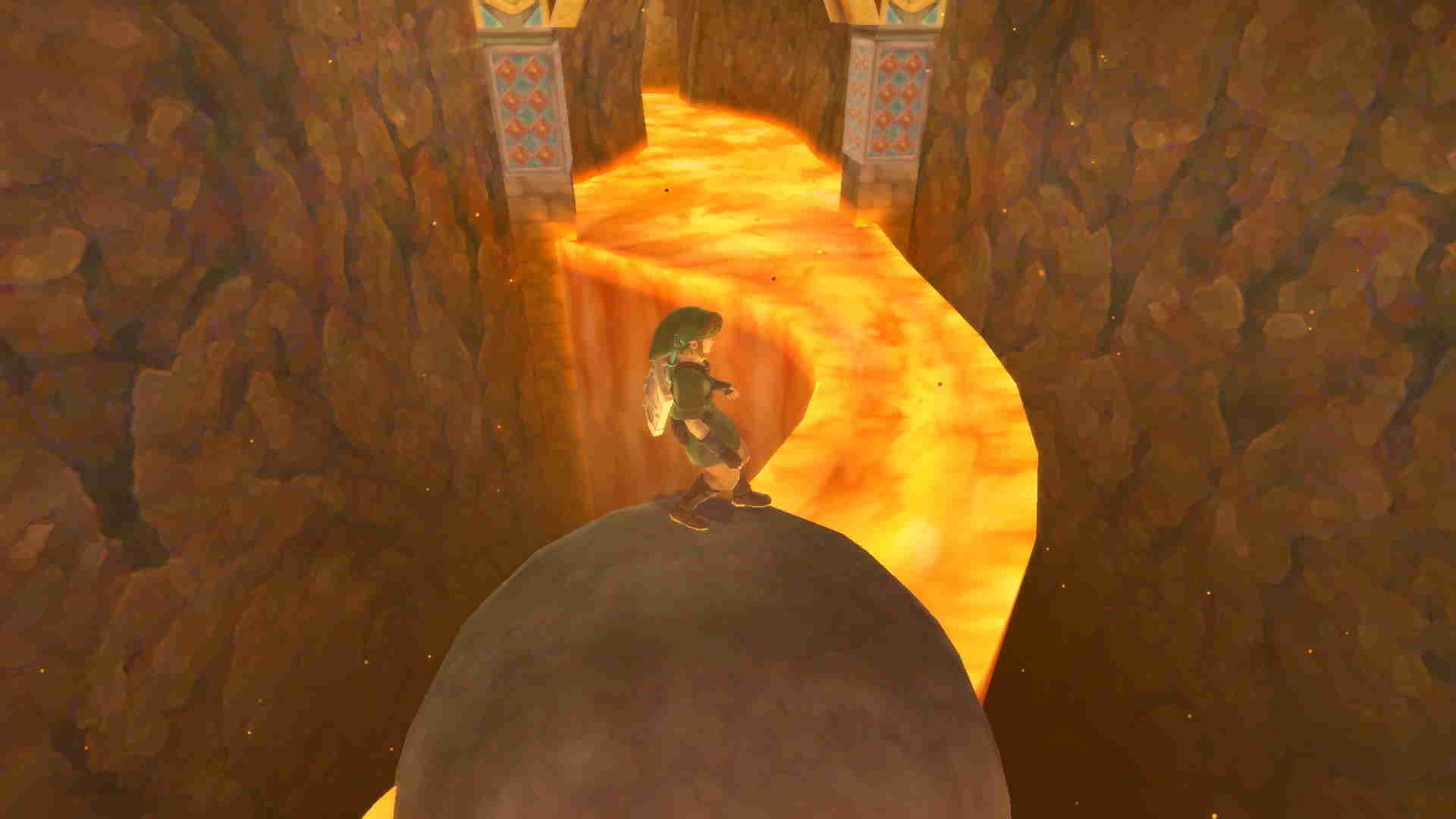 Simple as. Look at how many other Zelda titles have been remade or reimagined with tremendous success, and great additions. Wind Waker HD made me cry salt tears of joy with its fast travel mechanic. 3D Ocarina and Majora was mighty purdy, but the gyro controls worked a treat. Link’s Awakening was a slam dunk. This one is in great hands.

The motion controls were never as bad as you thought

Yeah, I said it. Anyone moaning in 2021 just wasn’t swinging the remote right back in the day, not recognising the nuance, swinging the damn thing around willy-nilly. Played with grace, timing and patience, the humble Wiimote is a mighty weapon. Piloting the flying scarab beetle was frankly much more fun than any experience I have had of the succession of drones my kids have had as presents. And capturing insects remains the best side hustle in any Zelda. 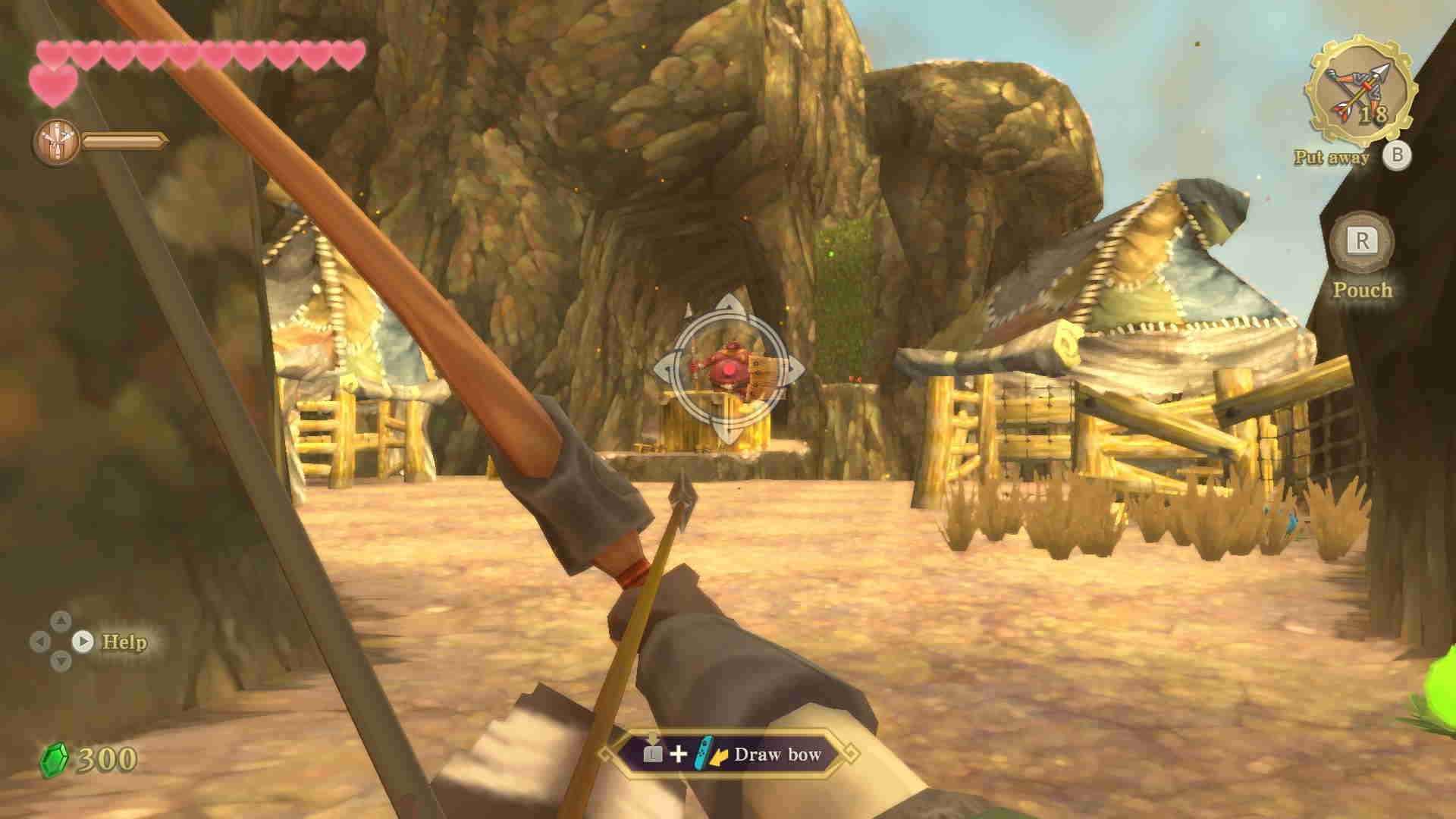 All the motion controls will be retained on the HD remaster, whilst also allowing less adventurous swordsmen, or Switch Lite owners, to play using bog standard controls. Bring it on!

Listen. Back in 2011 I though this game looked beautiful, it had (has) a hazy Miyazaki-esque fever dream feel, it borrowed from many a Ghibli classic whilst still feeling proper Zelda. The only time I wondered about improvement was when I saw someone running the thing through an emulator in HD, at which point I cursed my lack of IT ability and cried at its beauty, again. The Switch remake is going to give me this feeling all over again. 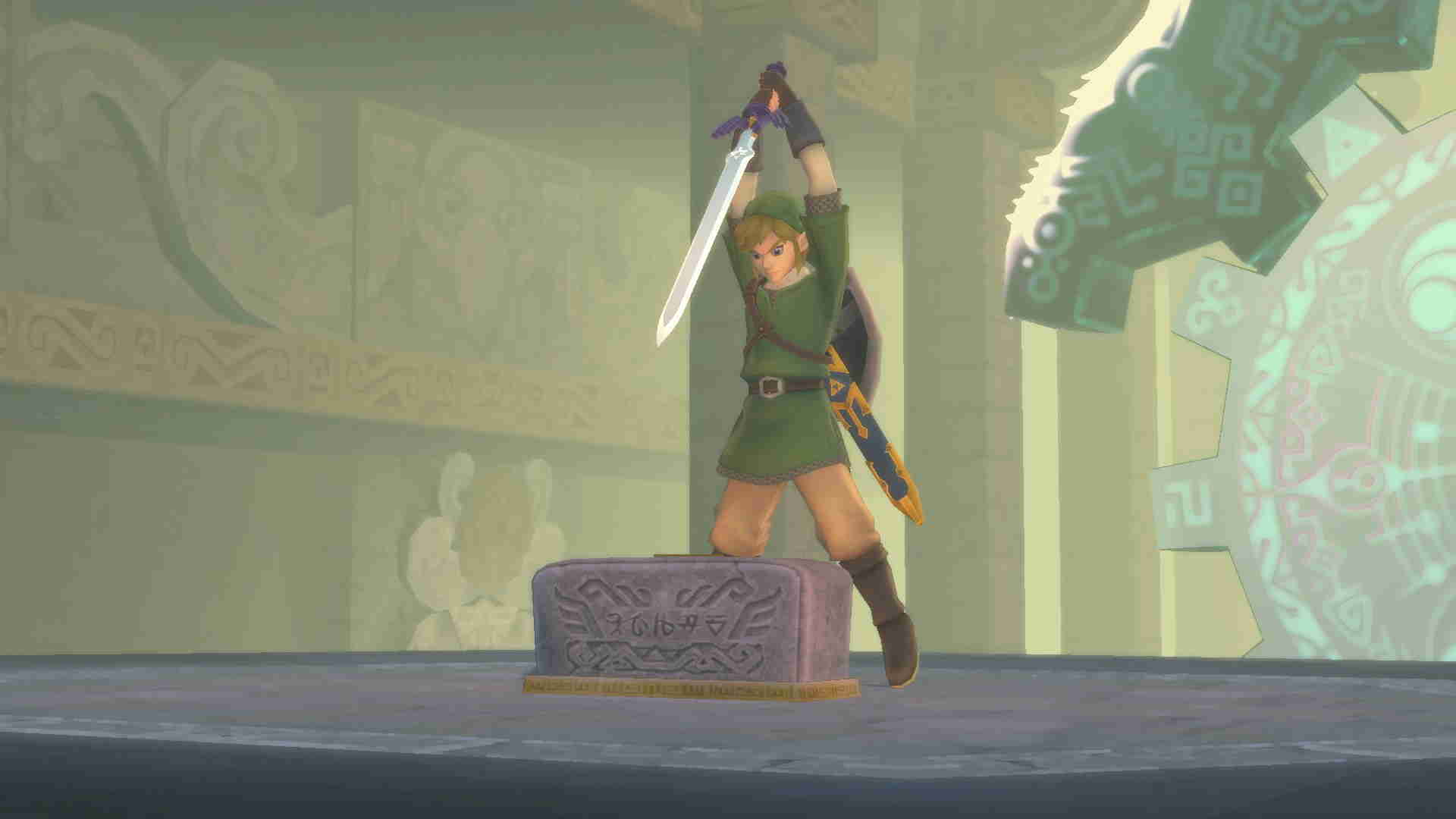 For those who don’t like to enrich their lives with the colourful dialogue of its rich tapestry of denizens, you can now skip through dialogue the same way my editor scans through my writing before publishing it. Equally, you can now skip cutscenes too. Both of these inclusions will appeal to those who found this a hard-going nuisance originally.

It may seem small, but the inclusion of character names when you speak to them is a great addition. What with the number of side quests you have, and the many citizens you talk to. Gone too is the ridiculous way a full description of collected items will repeat itself throughout the game. 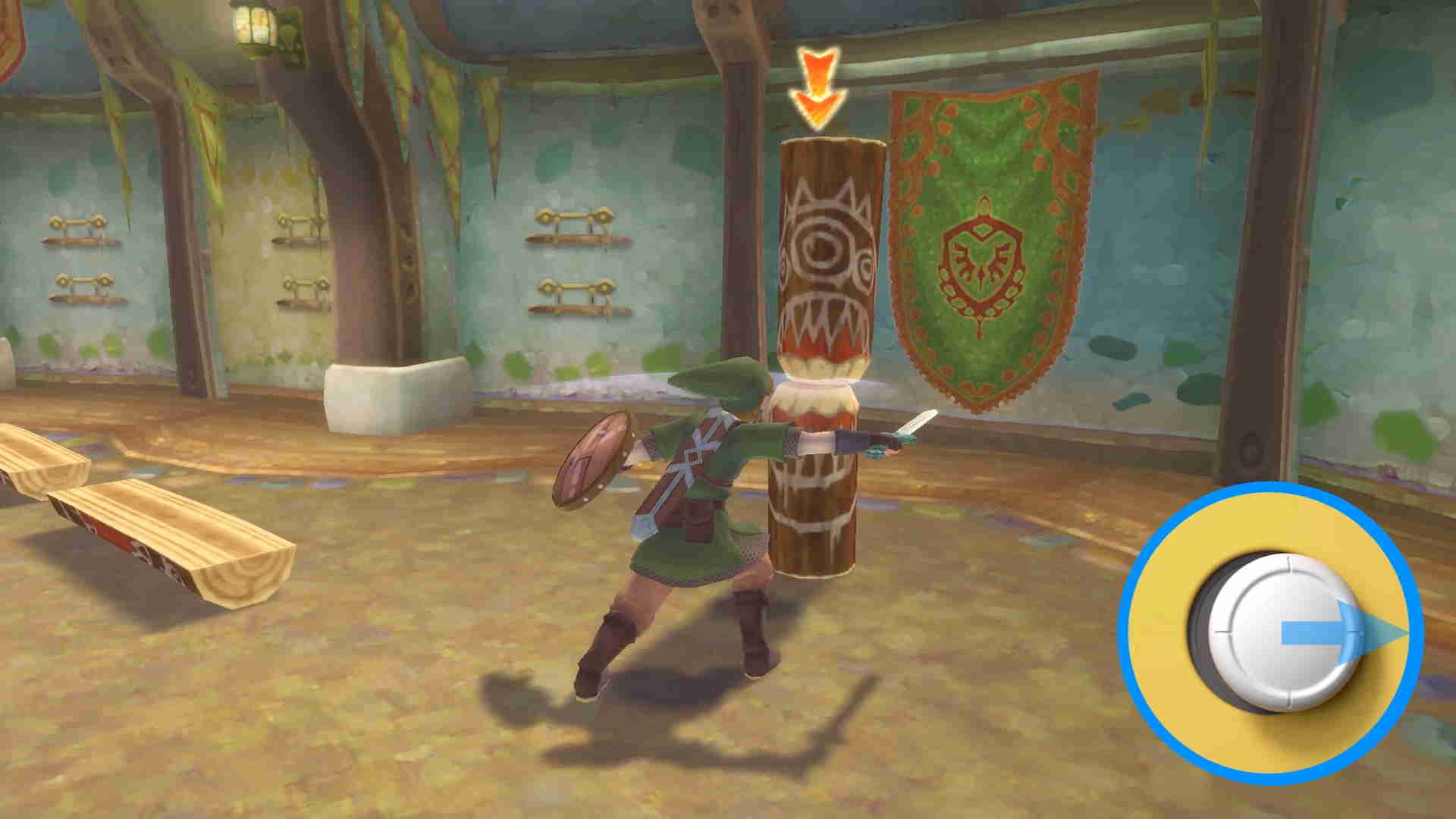 Want the option of additional in-game hints courtesy of your anthropomorphic sword buddy? You got ‘em. You want to return to Skyloft at the drop of a hat without the ball-ache of finding a bird statue? Then shell out the thick end of thirty quid for the slightly more expensive than normal amiibo, good buddy. Why wouldn’t you play Skyward Sword in 2021?

It’s still one of the best games in the series

This. THIS! Skyward Sword is a wonderful game, and always has been. It has an otherworldly, alternate universe feel to it that is quite at odds with everything that has preceded it. It is the quirky hinterland betwixt Ocarina and Breath of the Wild, whilst never really completely feeling like either. The gadgets are unique and mystifying – the flying beetle in particular one of the best in the entire franchise.

The world is unlike any other that our green tunic wearing hero has ever set foot in, and the dungeons are as radical and astonishing as he will ever have to puzzle his pointy eared ass out of. Best of all, anyone coming into this having not played the original will be getting it will all of the above thrown on top of an already very enticing package. Ten years on from the first time I swung Link’s virtual sword, I still feel the same. Experience it with me again.