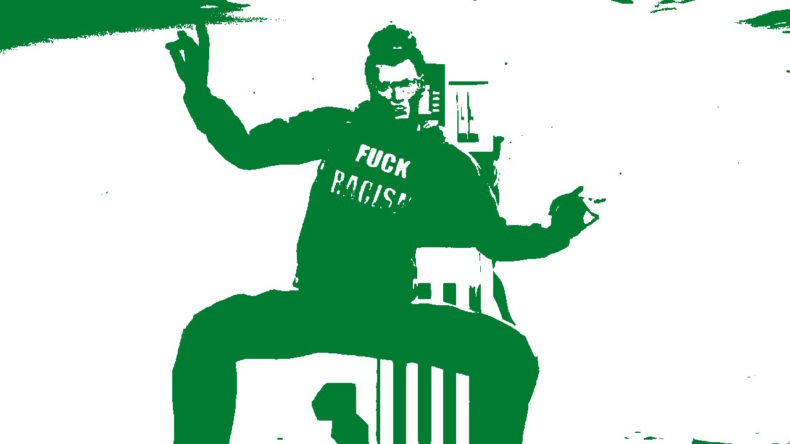 There are still a few final bosses left between you and saving the world in No More Heroes 3, and you’d better believe they’re seriously tough. Be warned that there are spoilers ahead, so unless you’ve reached these bosses and know what’s coming you should probably click away now.

If you’re struggling with these final bosses though and need a helping hand, we’ve got you covered. We have all of their attacks listed, best times to use your special abilities and tips on how to survive. If you’re finding any of the bosses especially tough, it’s also worth buying a load of sushi for buffs and healing. All these bosses can be beaten without any additional help though, so if you’re already in the fight do not worry.

This battle with your brother feels like somewhat of a mirror match, with Henry packing beam katanas, long combos and the ability to block. As long as you dodge and weave well though, you can end this sibling rivalry today

We’ve dealt with plenty of combos on the way to this fight, but none as long as this. As long as you hang back you should be safe up until the last hit, then a dodge roll is all you’ll need to come out unscathed. You’ll have time to get a few brotherly stabs in after too. 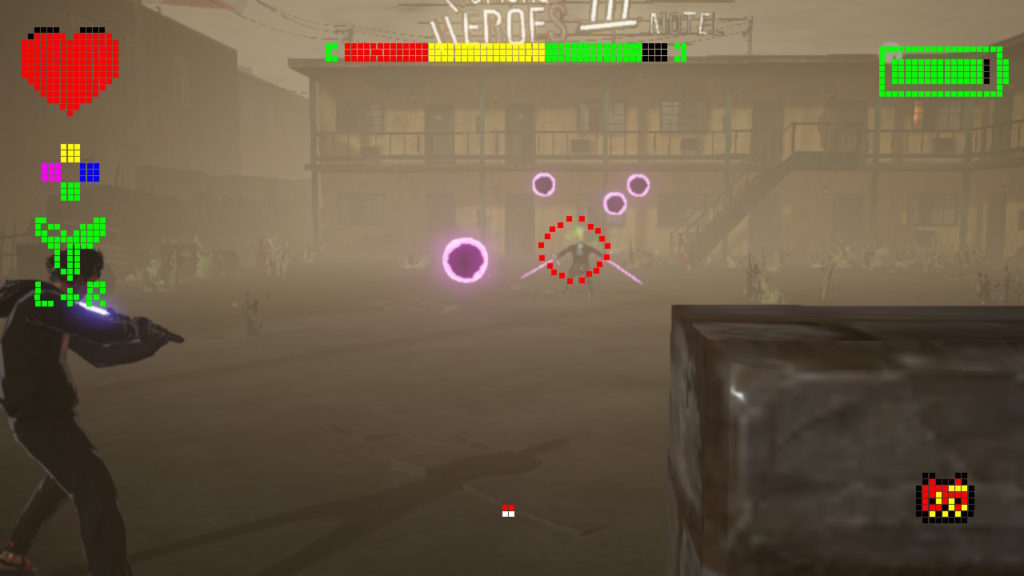 Henry launches 5 orbs at you, and if you get by the first you’ll get hit by all five. To avoid taking massive damage, just run in a straight line and there’s not a chance you’ll get hit.

This combo is only three hits long, but Henry makes his swords twice as long giving him much more range. You’ll probably need to chain dodge rolls to get out of the way, and as long as the big cross slash finish doesn’t tag you then you’ll get chance to deal some pain.

One of Henry’s most powerful attacks sees him flip through the air with his sword and aim to land on you. It’s a tough move to dodge, and to get the timing right you should wait as long as you dare before rolling away.

Once he hits his second form, Henry gets a couple of new attacks. The Teleport Stabs see your brother vanish then reappear next to you and try and stab you repeatedly. You’ll get locked into a lot of damage if he gets you, so try to get used to the timing of the dodge to keep that health up. 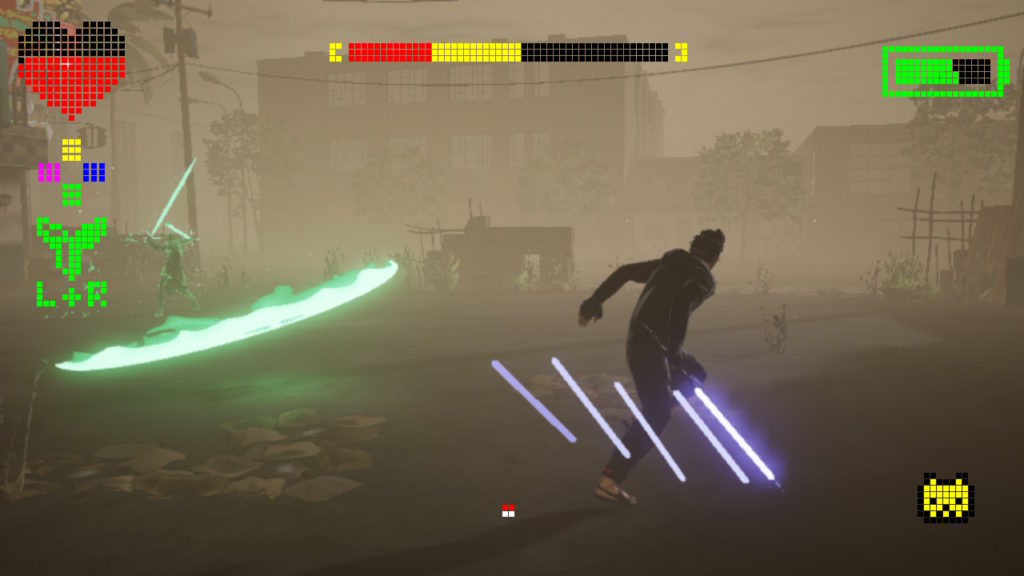 This ranged attack is quite an upgrade from the orbs. These three long beams need to be jumped over, because again if one hits you they all will. 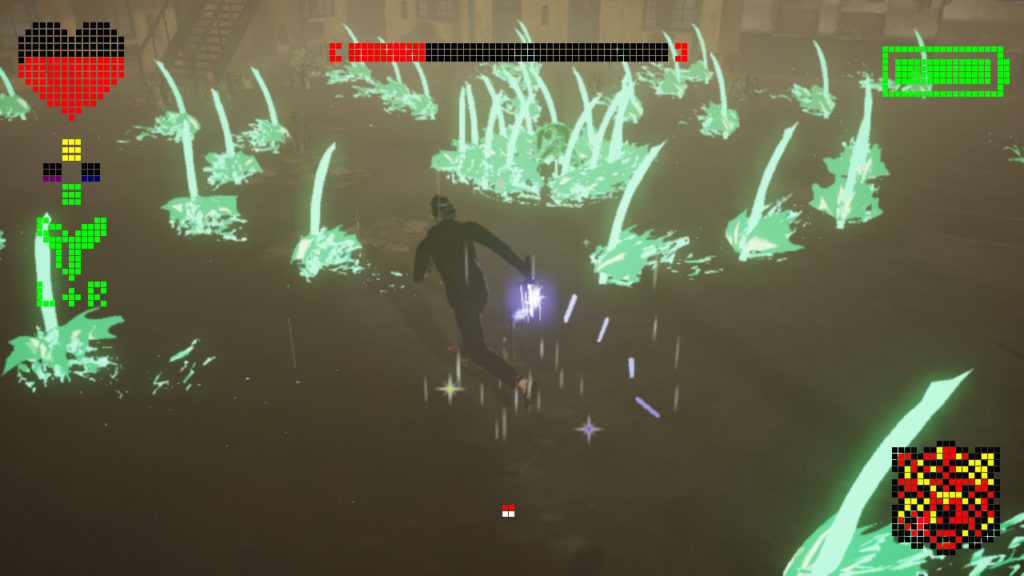 In his final form Henry gets some seriously flashy offense. The Ground Blades involve dozens of swords coming out the ground and moving around in circles. As long as you keep your cool and follow the direction of the blade it’s not too difficult to deal with.

Henry has made his swords bigger a few times now, but this is ridiculous. His now screen filling blades will slash horizontally towards you, and two well timed jumps are the only way you’ll avoid some serious damage. It’s not the hardest attack to avoid as long as you’re prepared.

Henry is a tough opponent, but is vulnerable to all of your Death Glove skills. Find the attacks you struggle most with (for me it was definitely the Whirlwind Attack) and disrupt it with the Force Throw as much as possible, or the Dropkick if not.

Time Slow is a god send in terms of damage dealing, as it so often is, and if you use it after some dodging you’ll usually deal enough hits to stun your brother for a free throw to top things up.

You’ve finally made it to the big bad, but you’ve got a long way to go before you take him down. FU is a long and difficult boss encounter, with a huge arsenal of moves just waiting to destroy Travis if you’re not careful. If you want to get to Rank 1 you’d better educate yourself with our guide.

Before I get started with FU’s moves, we need to talk about his shield. FU cannot be harmed at all (even with Death Glove abilities) apart from when his shield goes down. You’ll get chance to damage him during a very small window after his melee attacks, and during some of his ranged ones too. Once you damage him he’ll be stunned long enough to really wail on him, so don’t stop attacking too soon.

Wouldn’t be a boss fight without a basic melee combo, and honestly FU has one of the easiest ones to dodge. His shield drops after too, making this one of the best times to deal some damage. 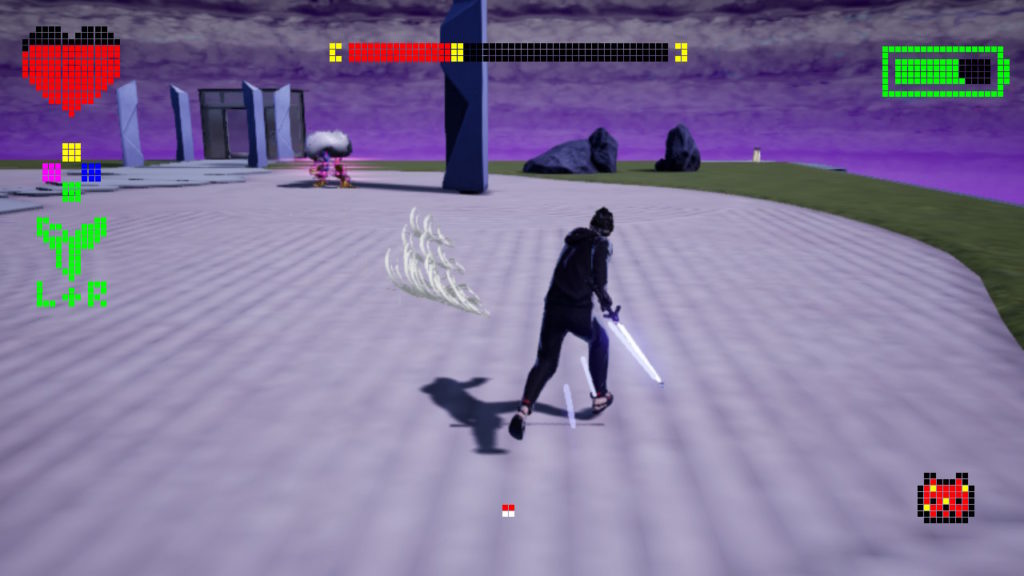 FU fires off two rounds of swirling homing spears for this attack, in one of his least threatening offensive maneuvers. The spears don’t deal a ton of damage, and can be dodged easily by rolling into them or around them. There’s no opportunity for damage after this, so just stay safe.

This ranged attack is a bit more dangerous. FU sends two waves of spikes propelling towards you, which move pretty quickly and follow you. The waves disappear eventually, so if you’re far enough away you might be safe. These spikes deal a decent amount of damage, so a well timed dodge roll is your friend.

When FU gets his arms ready for a grab, get out of the way. He moves pretty quickly when he’s going in for a grapple, but as long as you avoid his grasp you’ll have another chance to break through his shield. 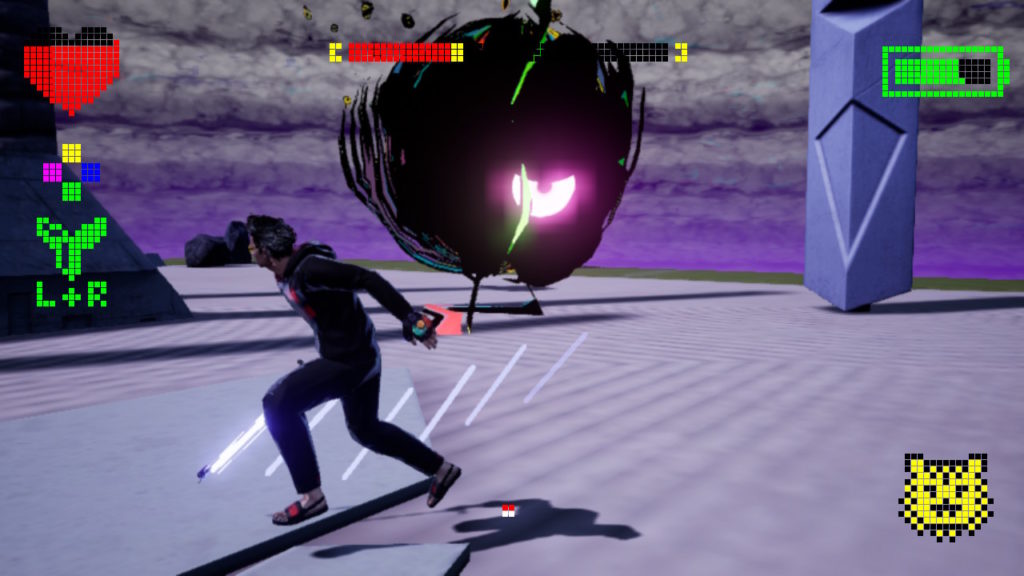 In his second health state FU has a couple more attacks you’ll have to deal with. The first of these is the Evil Bomb, which explodes on impact to create a huge damaging area. There’s no reason to stick around when he prepares this move, so just leg it and keep that health bar stocked.

This seriously powerful move sees the number one villain blasting out a dark pulse from his location. Don’t rush back towards him after a pulse or two either, because he does six before he stops. In the middle of this move he is vulnerable to damage, so if you get creative you can use this opportunity. 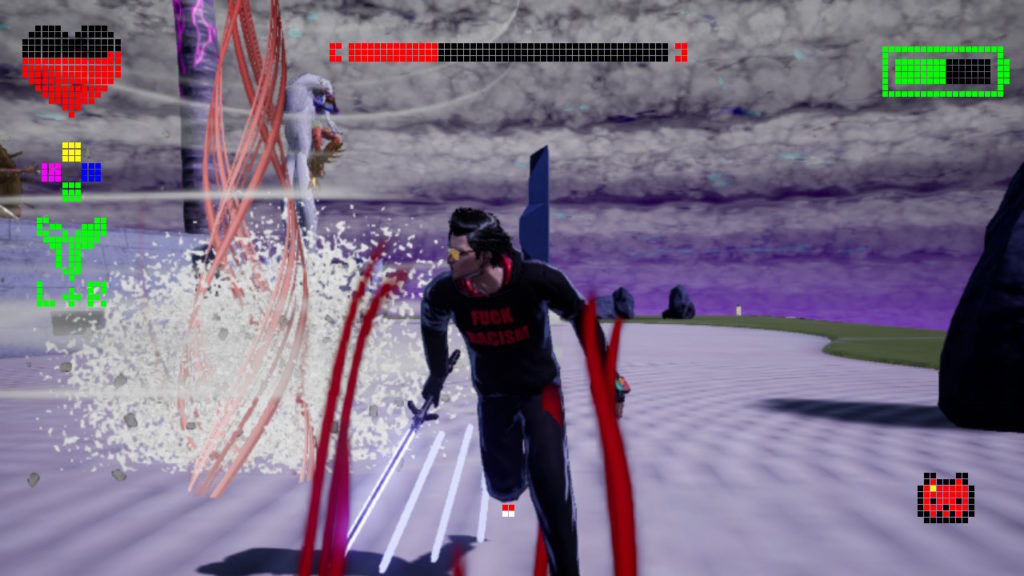 Once he hits the red part of his health bar, FU adds two new attacks. This one sees him extend him hair so it supports him floating in the air, then he summons red damaging waves from under you. You don’t really have to be clever to avoid this one, just keep moving.

This attack is by far the hardest to dodge of all of FU’s arsenal, and deals a lot of damage to. FU teleports to above your position and slams down to create a pulse in your location. Dodge rolling away is unlikely to save you here, but if you perfectly time a jump you can avoid this. If you manage to time your leap right, an aerial attack will stun FU and give you a great opportunity to hurt the prince.

The hardest thing about the fight with FU is how few opportunities you get to hurt him. You won’t have many opportunities to use your Death Glove, so figuring out when you can successfully use them is the key to winning.

When he uses his Evil Pulse or Hair attack you can deal some safe damage with Death Rain. Time Slow is an absolute must use after his melee attacks, and a well timed dropkick can fit into combos to deal the hurt.

The true bad guy has been revealed and the final battle is here. He may have seemed meek for most of the game, but the CEO is ready to take on Travis in a final showdown.

This battle is one of the many twists throughout No More Heroes III, taking place in a 2d arena in the style of Super Smash Bros. Just like the beloved Nintendo fighting game, you’ll need to raise Damon’s damage percent so you can blast him off the stage. This fight doesn’t actually function like a Smash match though, and your aim is simply to get him to 99% and then hit him once for the victory.

Although the battle is fought on a 2d plane, it works the same as any other fight. You’ve got all your Death Glove attacks, dodge rolls and beam katana abilities at your disposal, and that’s all you’ll need to end this fool. 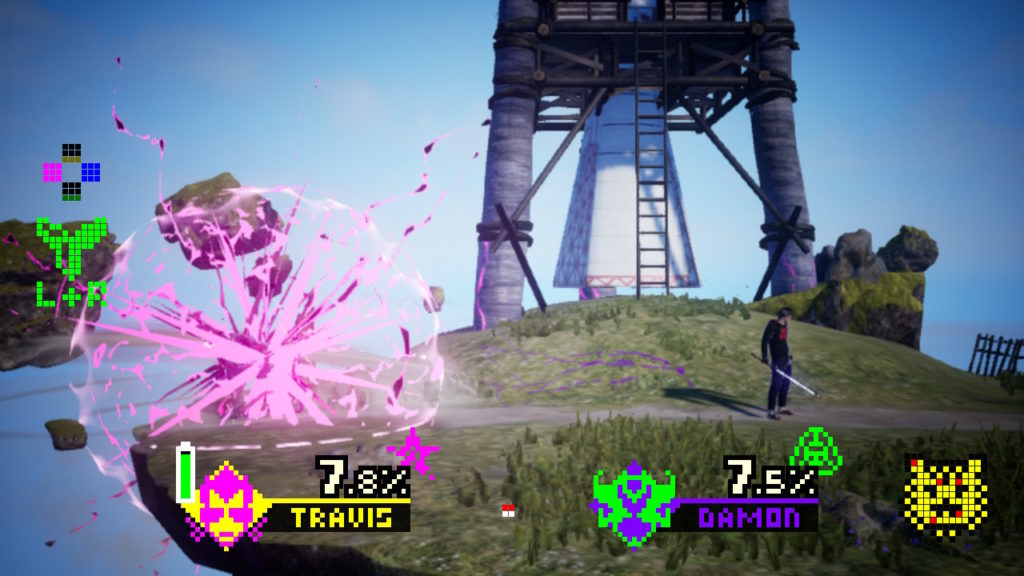 In a simple but effective attack, Damon transforms himself into a big ball of spikes. If you’re close you’ll take damage, so don’t be close.

A rare single hit in No More Heroes III, this swiping attack isn’t particularly threatening if you’ve done a dodge roll before. Plenty of opportunity to whack Damon around after too.

If you see Damon teleport, quickly roll to the side because he’ll probably be about to drop on you for moderate damage. As long as you roll first and ask questions later you should be fine. There’s another opportunity to nail him after he lands too. 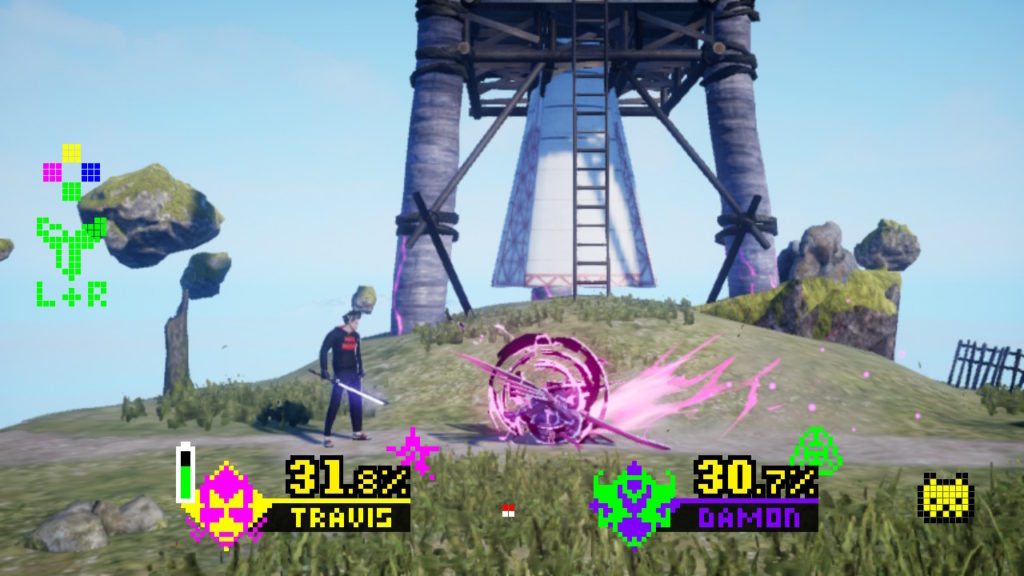 The rolling attack is the hardest of Damon’s moves to dodge. The big bad will roll into a ball and charge towards you. You’ll need to time a jump well to clear his round form, then prepare to do it all over again as he bounces back for round two. Nailing both jumps is tricky, and you’ll take a good chunk of damage if you don’t.

Damon’s ranged attack of choice sees him flinging 4 spikes out in straight lines to skewer Travis. Try to get used to the trajectory he fires them at, and take a few steps back for an easy dodge. 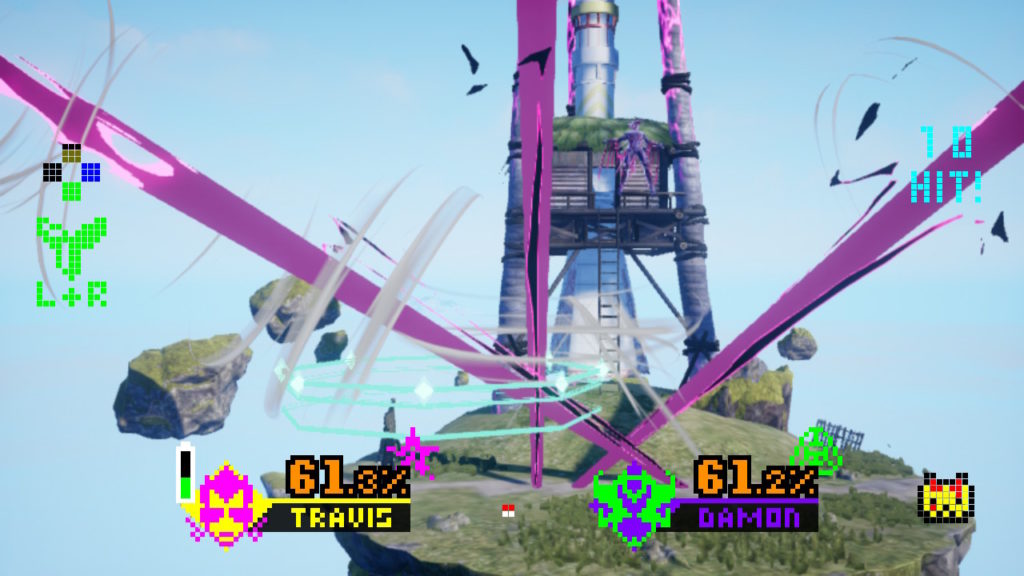 Once he’s above 50% damage, Damon will start unleashing his ultimate attack. He’ll teleport up to the top of the screen and the edge of 3 huge spikes can be seen. Whatever direction the spikes are pointing move away from them immediately, as they’ll soon stab across the entire battlefield and deal massive damage. It’s not too hard to avoid this, so just pay attention and practice.

Don’t be intimidated by how this fight looks, although you’re on a 2d plane this is just another boss fight. After the nightmare that was FU, I’m pleased to announce that your Death Glove is much more useful this time around. Other than his Mega Death Spikes, every one of Damon’s attacks can be cancelled with a Force Throw (I used it every time he tried to roll at me).

It actually doesn’t take too long to deal enough damage to beat Damon, so make liberal use of your Dropkick and Time Slow and he’ll drop in no time. Congratulations, you just beat all the final bosses in No More Heroes 3!