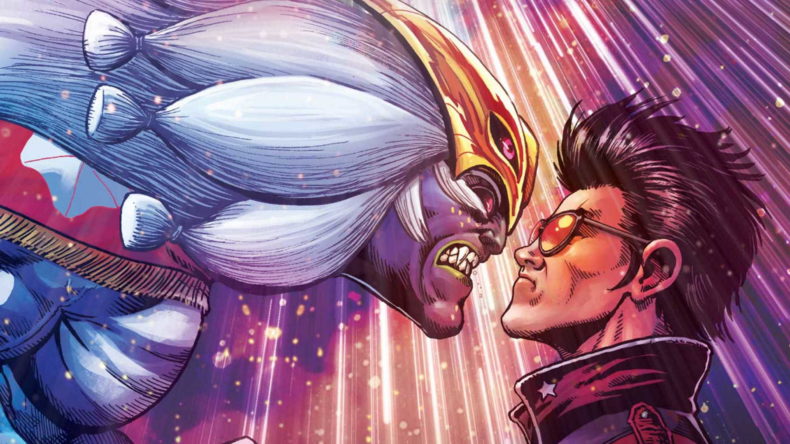 In the early days of the Wii, among party games and Nintendo’s own delights, Grasshopper brought out a new game unlike any other. No More Heroes featured exciting gameplay and ultra violence unlike anything else on the console. There was also some of the most outlandish characters in all of gaming. Despite gathering quite a cult following, the game and its sequel ended up passing me by. After playing other ridiculous titles from the developer like Shadows of the Damned and Lollipop Chainsaw though, I was determined to give the series another shot and got pretty excited for No More Heroes III.

Our story doesn’t truly begin with Travis Touchdown this time around. Instead it features a young boy called Damon and his adorable furry alien friend FU. A beautifully animated and heartwarming cutscene shows them adventuring together. But eventually FU leaves his human friend and returns to his home world. Decades later, the now CEO Damon is greeted by a brand new FU. In his absence he’s become a terrifying leader of an alien army, and proceeds to murder a ton of people and begins taking over the world. There’s only one person on Earth who stands a chance of stopping this new threat. And thus begins Travis’ adventure to save the world.

No More Heroes III: F… You?

To get to FU you’ll need to make your way up through the Galactic Superhero Rankings. This is a list of ten aliens to dispatch in order to make your way to the big bad. Every single one of them provides an exciting battle, and is just full of character. Whether you’re fighting a big blue alien or a robot made of pure gold, they provide the perfect amount of challenge and a ton of entertainment. 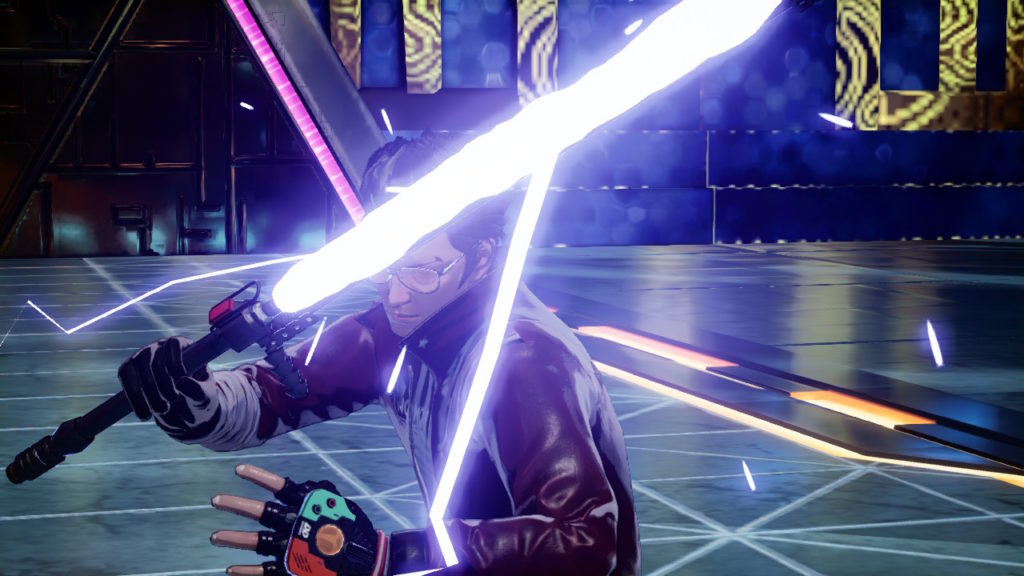 To take down the bosses (or any other enemies for that matter) you’ll need to use Travis’ iconic Beam Katana. Combat is very much in the usual character action style. You can do light and heavy attacks, dodge, and perform all manner of special moves. Once you deal enough damage to an enemy you’ll stun them, opening them up to an attack from Travis’ other specialty: professional wrestling. Hitting a Brainbuster or DDT is an especially satisfying way to finish a baddie off.

All of your special moves are on a cooldown, and are assigned to different directions of your D-Pad. Each one of them is incredibly useful, though. There’s a powerful dropkick, a time slowing power, an enemy throwing attack, and a damaging AoE. Perhaps the most fun element of combat though is the slot machine that activates with every kill. You won’t always win on the slots. But when you’re struggling it definitely helps to turn invincible or gain the ability to throw all foes. 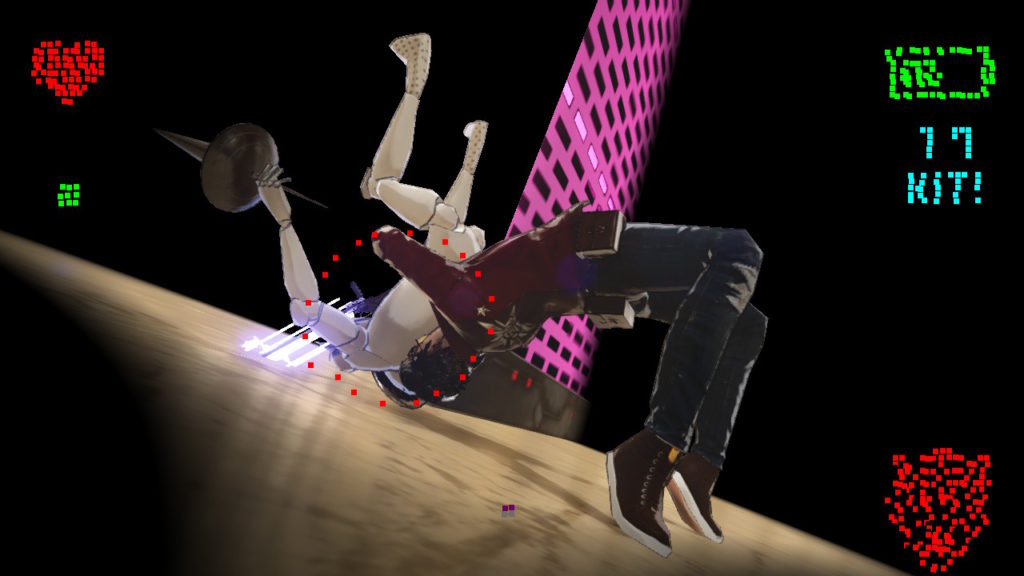 Although the boss fights are great, you can’t just fight in these ranked battles without winning designated fights against grunts and earning enough money for the privilege of a fight to the death. This is unfortunately where the wheels fall off a bit. Because to earn this cash you’ll need to do some pretty tedious activities. If you want to focus on combat only you can probably grind dull battles to rake in enough pennies. But otherwise you’ll be forced to take part in some side quests.

The jobs you do for money range from acceptable to horrendous. But they all feature tutorial text no matter how many times you do them. One job is unclogging toilets, which requires you to plumb in the right spot in the loo hole. Another sees you firing at gators with a tank, in a classically dull turret style. The best it ever gets is moving lawns, which says a lot about the general quality. 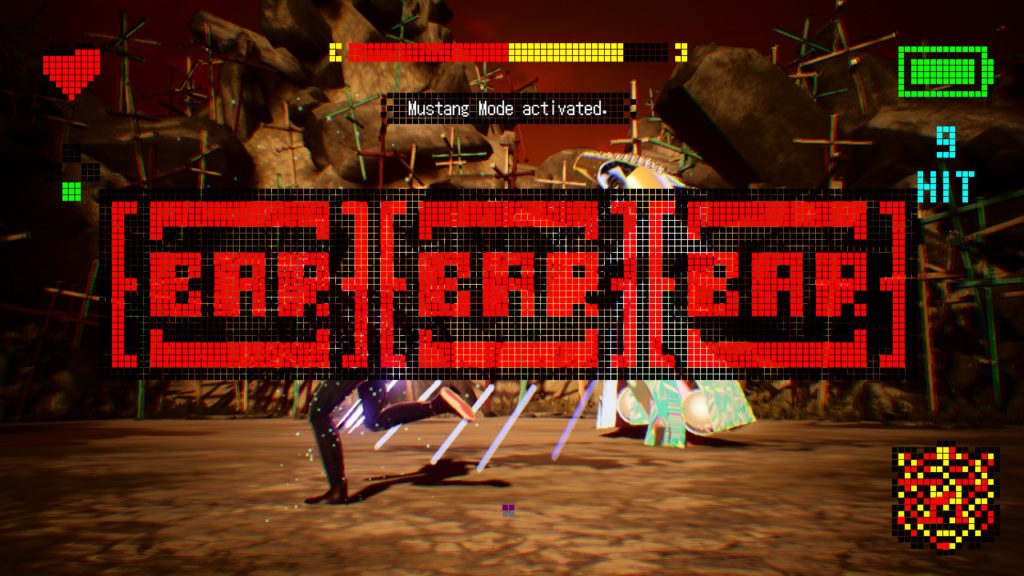 Travelling between jobs and fights is even worse than the monotony of the toilet cleaning. The open world of No More Heroes III is ugly, empty, and suffers from constant framerate issues. Travelling on Travis’ ridiculous motorbike seems like it’s at least going to be enjoyable. But flying off when you crash into bumps you can’t even see is beyond frustrating. Eventually you’ll also unlock different themed open world areas. These range from generic cities to the most horrific brown dusty battlefield meant to mock Call of Duty.

The comedy and charm of No More Heroes III is often great though. There’s a glorious rap battle, incredibly charismatic bosses and a bunch of niche references that fans of games and anime will love. Not every funny moment quite sticks the landing though. And after suggestively charging your sword and saving on the shitter for the tenth time I wasn’t rolling on the floor with laughter. 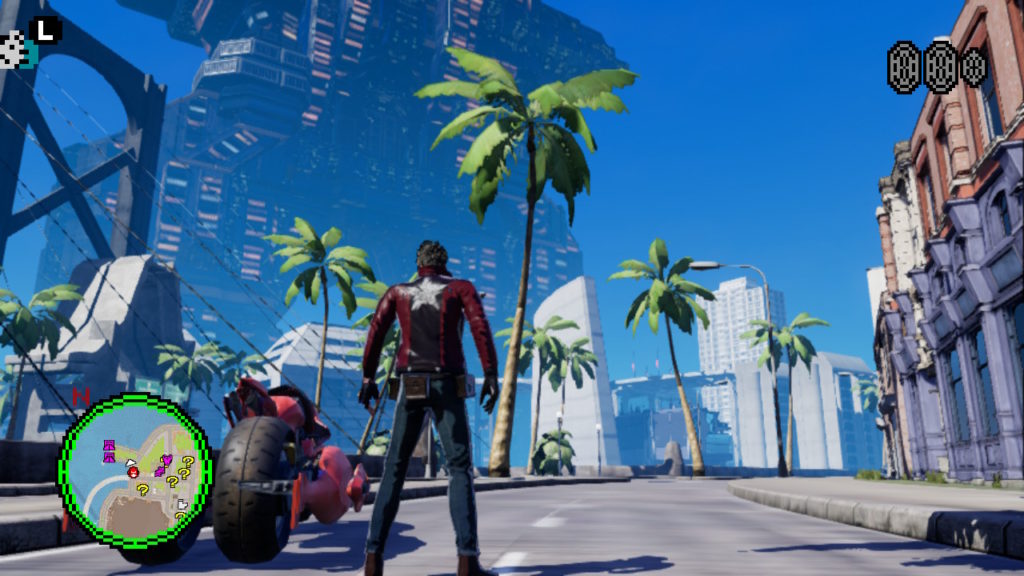 Despite having its issues, it’s hard to deny how impressive the boss fights are. Learning attack patterns and overcoming some unique offense is consistently enjoyable. One boss takes control of the camera until you attack the thief, another begins with a fight of a completely different genre. The shifting in gameplay comes in thick and fast, starting with a beat em up intro and continuing throughout with mixed results.

The game does have a lot of problems, but the biggest one I personally had was to do with leveling up. To power up Travis you need to descend down a pole in your bedroom to a secret lab, and I didn’t discover this until the last third of the game. There isn’t a prompt to let you know how to access the area, and it certainly affected my enjoyment.

No More Heroes III has some of the best boss fights I’ve played all year, but outside of these epic battles there isn’t a lot I found engaging. There are some funny moments and a lot of style on display, but the boring side activities and dire open world make it hard to enjoy. I’ll definitely be returning for a boss rush or two, but as a total package No More Heroes III is very hit and miss.

No More Heroes III is a hugely mixed bag with loads of fantastic boss fights, but an atrocious open world that lets it down.